All roads lead to…
CATEGORY: Italy

Following our exhausting 2 day trek in the Cinque Terre, we were now ready to aim firmly south and set our sights on Rome.

Pisa was on the way and it would have been rude to pass by so we parked up a good 30 minutes walk away, got drenched in a downpour and munched a very average overpriced pizza on the run before getting to the famous tower. Expecting just to scoff at the tourists doing the funny picture thing, it was actually quite impressive – looks way more wonky in real life than in photos – and we spent some time also doing the funny picture thing. 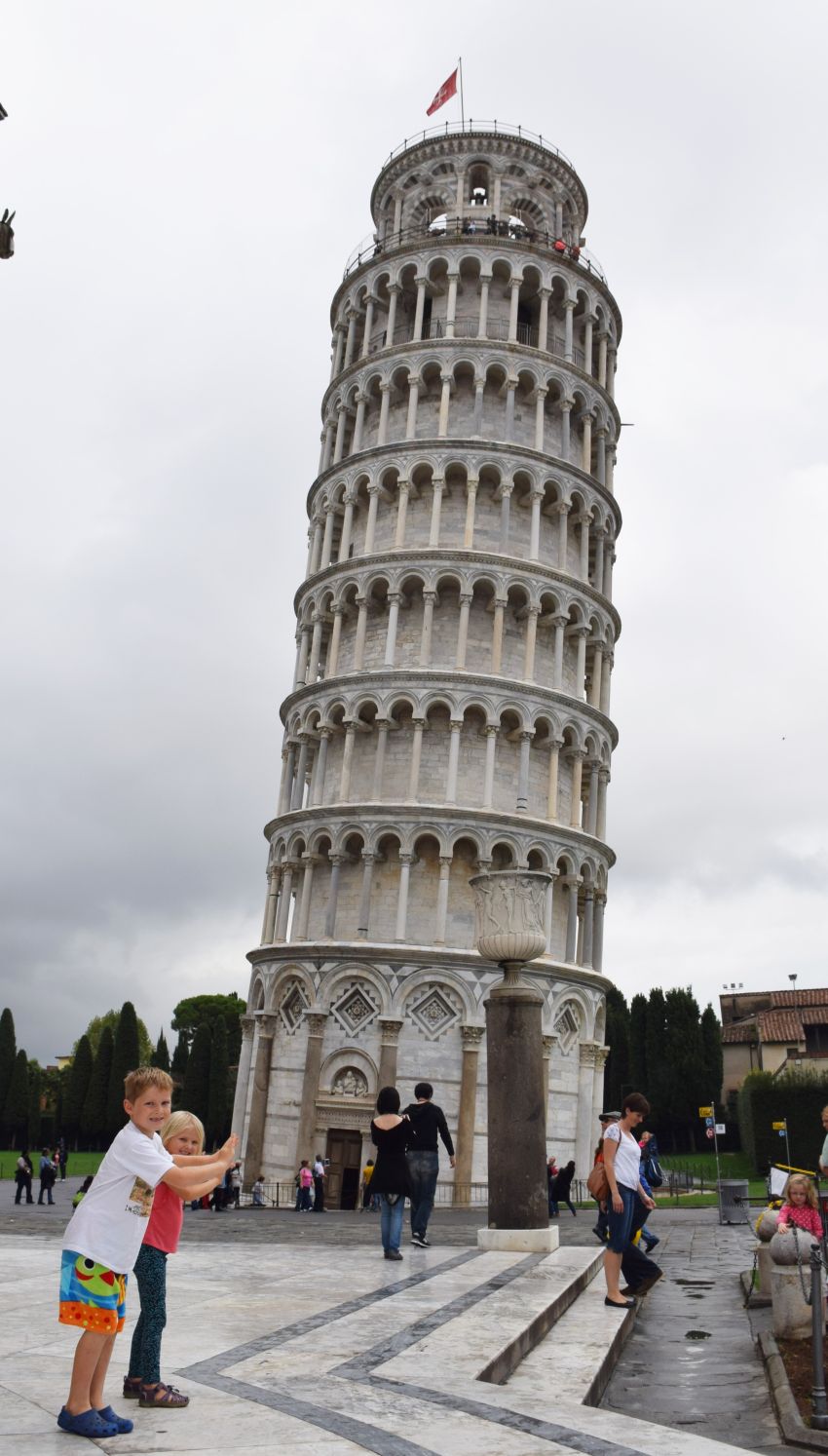 As we left that afternoon on the freeway with no idea where to stay it started to get dark – this was a problem as my left rear taillight and indicators were busted so we had to swing off the freeway and thankfully found a place to park up in Via Reggio for the night just on dusk.

Next day we gobbled p some serious miles as we powered back through Tuscany. The target was an interesting place called Calcata about an hour north of Rome. It’s an ancient fortified hilltop town with houses dug into the side of the cliffs (yawn, yawn…) but, apart from being picturesque it’s also notable for two other things:

1) In the early 19th century, the Italian government decided it was too dangerous due to the risk of an earthquake plunging all the houses off the cliff so they condemned the town and moved everybody out. However, shortly after a motley collection of hippies, artists and alternate types started to move in and have now reclaimed the town. So today an interesting population inhabits the old houses and caves.

2) The other interesting historical tidbit is that, in the 16th century something was uncovered in one of the caves that was authenticated as… Jesus’ foreskin! Stolen from Rome and stashed by a German soldier many years before. Word got out and pilgrims started to rock up to pay homage to the only bit of Jesus left behind. However in 1983, the foreskin disappeared in mysterious circumstances – many people suspecting the Vatican having nicked it as they were openly critical of the widespread interest the relic had caused. 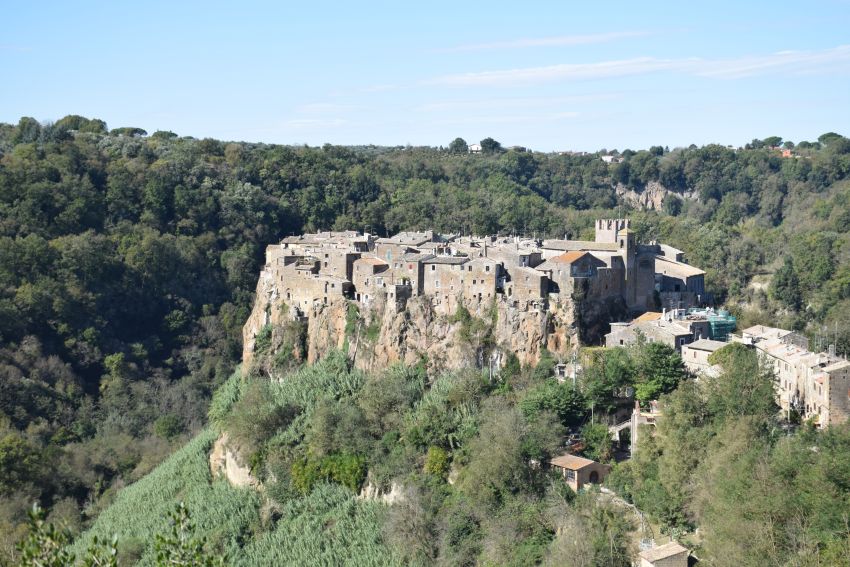 So, Calcata is sometimes referred to as Italy’s oddest town and was well worth a visit. We explored all the nooks and crannies, counted, categorised and named dozens of cats and Abbie and I enjoyed another midnight adventure in the spooky town. 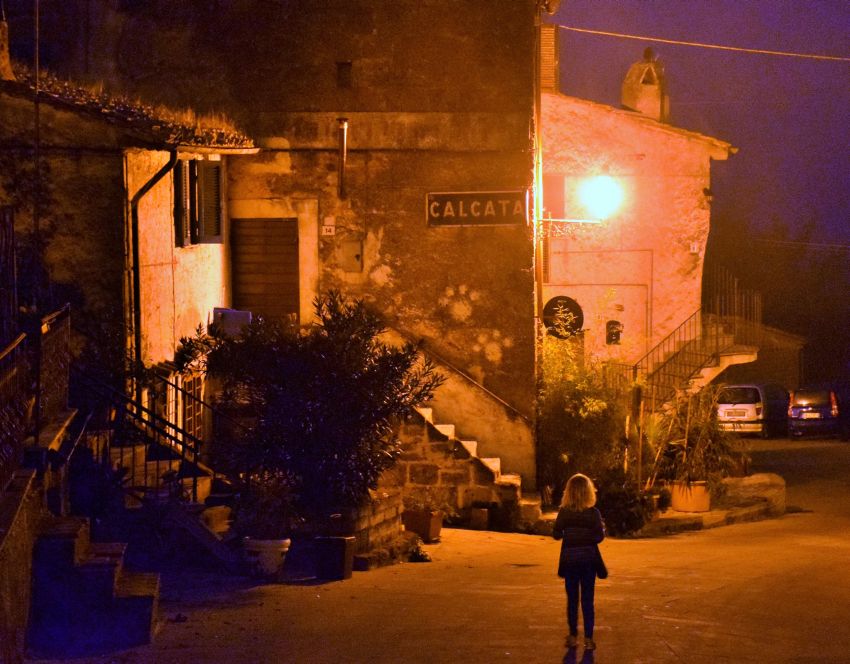 Next day it was onto Rome where we eventually arrived at the dealership where we had booked Frosty in for repairs. Despite a language barrier, we managed to explain most of the defects and also managed to foist Cadiz onto one of the ladies to look after for the week as well as drop a huge 50kg box off for pickup by courier the next day. Lovely people, the Italians and despite the fact that is was the lady who ended up with Dizzy doing us a favour, she insisted on giving the kids a couple of DVD’s and arranged for a friend to give us a lift to the train station way out of town. We gave her a keyring Koala and let her smooch the kids in return.

We spent 4 nights in Rome, staying in an Airbnb apartment in the Trastevere district in the centre of the city. It was a perfect spot but unfortunately the flat was a let down with major building work blocking the windows with scaffolding and spewing noise and dust into the place all day.

Anyway, after schoolwork each morning, we spent each day out and about racking up the kms around the historic centre – according to Chelle’s new fitbit hitting between 20,000 and 25,000 steps each day! In no particular order, we visited…

The Cat Sanctuary – a roman excavation which has been populated by 300 homeless cats (many missing a leg or two) and cared for by an army of volunteers. Peering in, at first it’s hard to see them but then suddenly you spot more and more sunning themselves in and around the ruins. 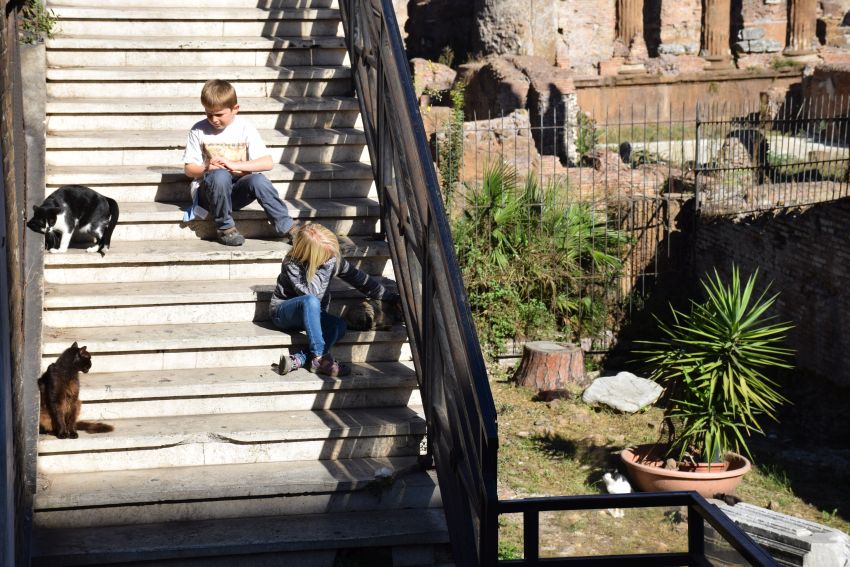 The Cappuchin Crypt – this order of monks – the Cappuchins maintain a modest museum but more interestingly have preserved a small crypt decorated by human bones and skulls. Believe it or not, this is the third crypt like this we have visited and although small was the most intricately decorated. Fine details from the boney lampshades to the hanging corpses some still with skin hanging off. A bit too gruesome for James and Chelle but Abbie loved the room made of human pelvises. (No pics, I’m afraid)

The Colosseum – clearly one of mankind’s greatest buildings and the perfect place to showcase some of Rome’s most exciting history – the games and the gladiators. We also spent a couple of hours in the Roman Forum next door which was actually more impressive than the Colosseum, maybe because the latter was just overrun with tourists. Both Rome must-sees. 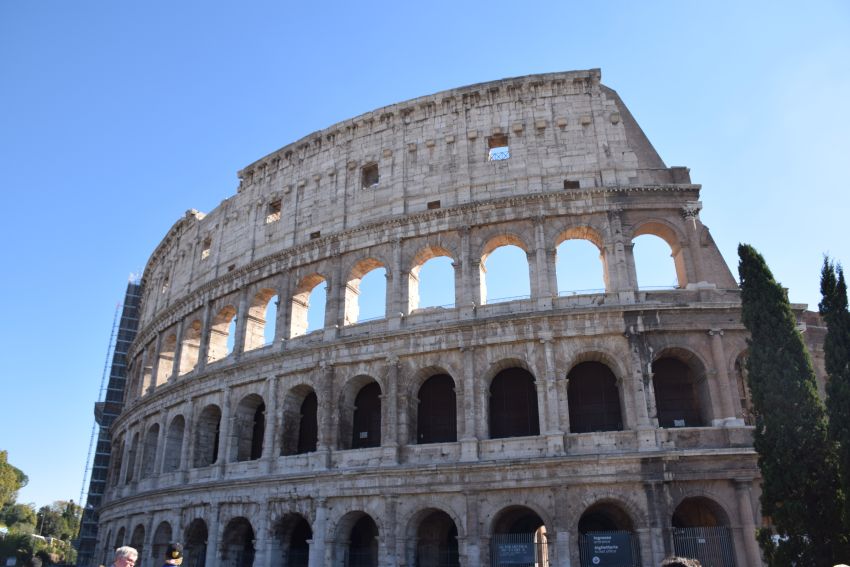 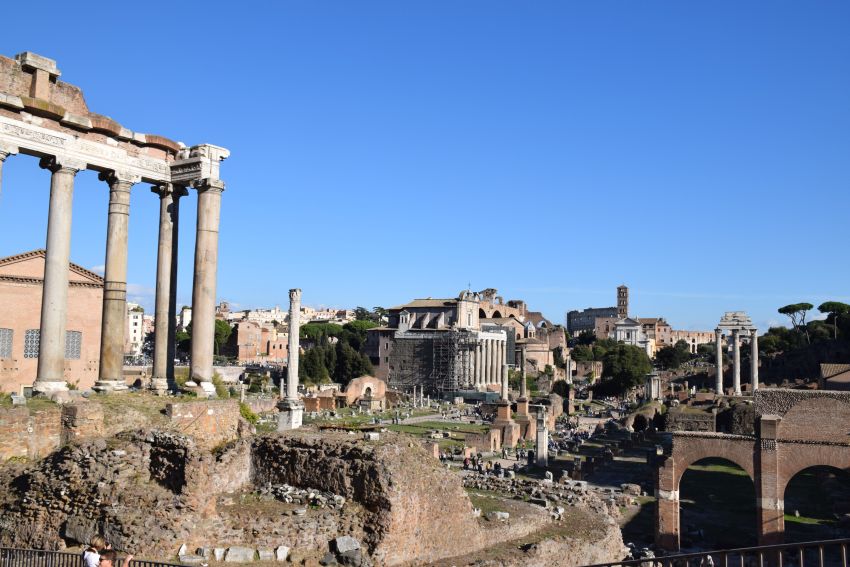 Vatican City – the queue looked horrendous but in the event moved quickly and was well worth the wait. Having seen dozens of churches and cathedrals over the year, it takes a lot to impress us these days but St Peter’s Basilica certainly did. The size was incredible but the sculptures and artworks were unbelievable. Rammed with people but nevertheless awe-inspiring stuff. 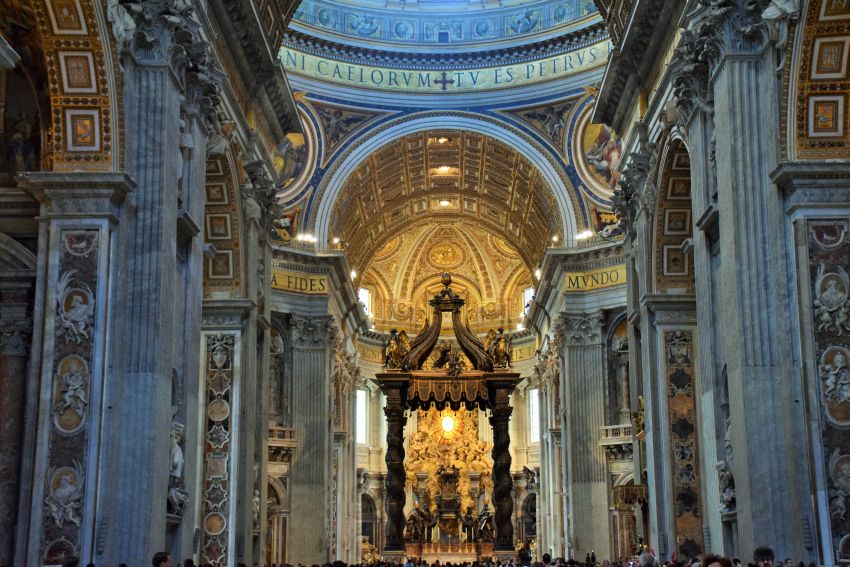 Boca della Verita – a face carved on a 2,000 year old marble manhole cover that, since the middle ages, has doubled as a lie detector. It is said that if one tells a lie whilst putting your hand in the mouth it is bitten off! Despite the tourist circus around it, the face itself is rather creepy when you get up close. 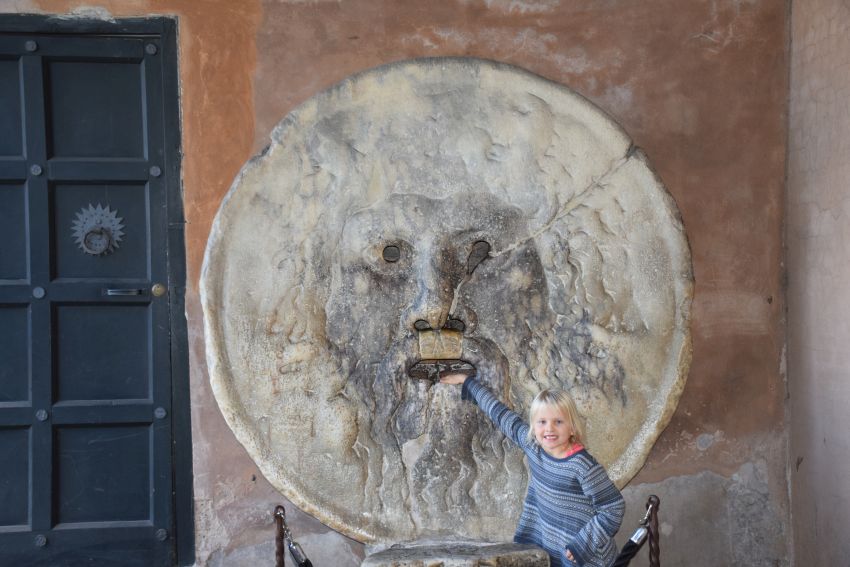 But aside from those major sights, we spent many hours wandering around enjoying the buzz of the city in the perfect weather. 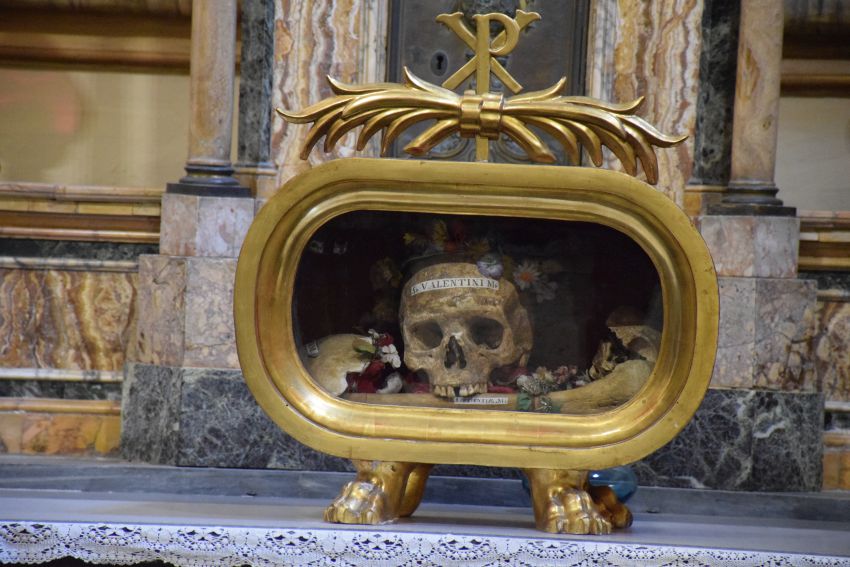 Our apartment was just a few steps from the river and the bridge and the immediate area bustled with cafes and restaurants. We visited dozens of churches (there are 1,000 within the inner city!) and perhaps 20 different piazzas across the city enjoying our daily gelato. For a bit of balance, we jogged up and down the river and up the hill and Chelle even took the chance to join a yoga class on the last day. 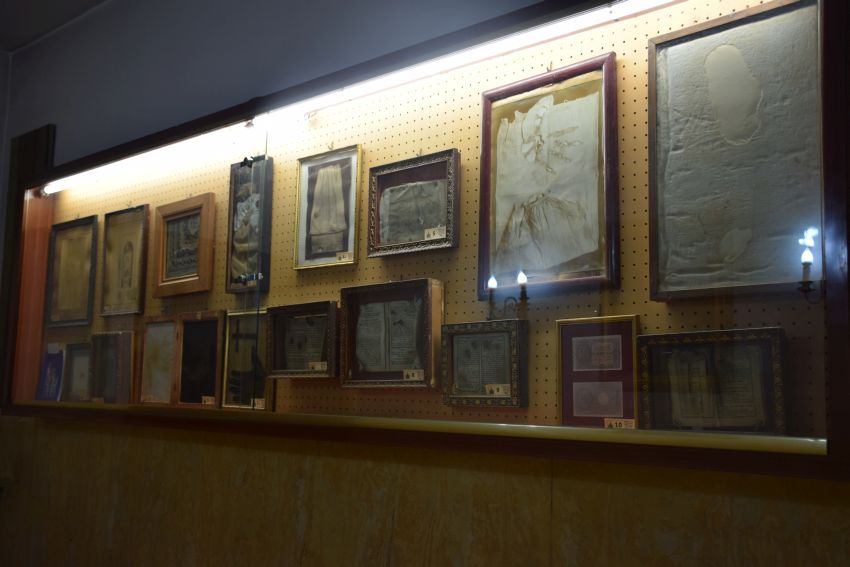 Purgatory Museum – these burnt handprints are certified as having come from beyond the grave. 100% verified.

Despite the rubbish, graffiti and hectic traffic, we absolutely loved Rome, its history, weather, beauty and its lovely people.

One Response to All roads lead to…