The ferry across from Sardinia was uneventful and before we knew it we were all sent downstairs to the vehicle deck for unloading. Being last on the ferry meant first off so as soon as we drove off, we had an instant queue of traffic behind us so feeling the pressure of all these cars behind us, we sped blindly off down the narrow one-way streets of Bonifacio. Eventually we shook our tail and turned back on ourselves intending to find a spot to stay in the town itself.

We wound up in the deserted top car park inside the citadel right on the top of the cliffs. Had to drive past four ‘no campervan’ signs, two ‘no over 3.5 tonnes’ signs and one no entry sign to get there but it was worth the effort. 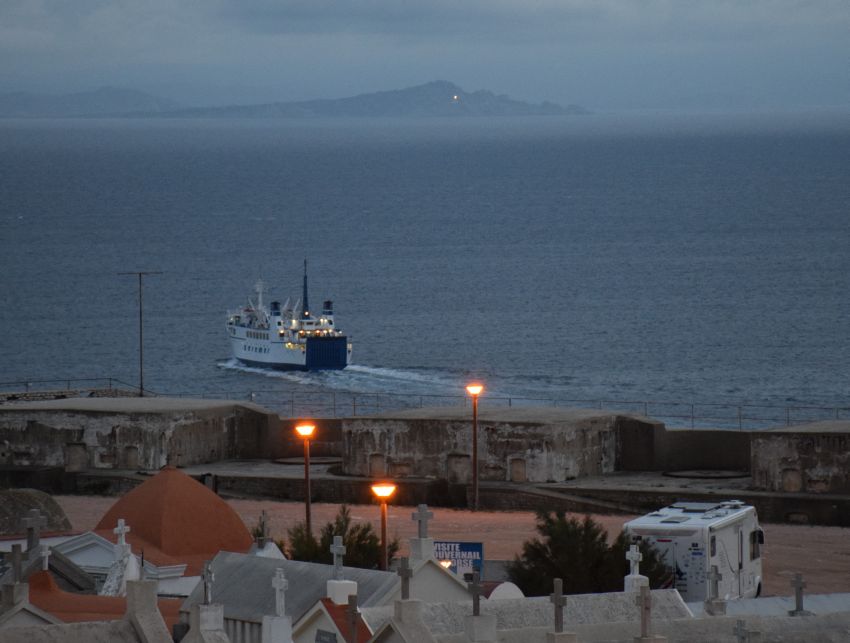 Frosty bidding farewell to the ferry that dropped us off

We settled in for the night and after a jog each the next morning, set out to explore the town with the kids. It was a lovely little place and a relief to be able to speak French again (although Corse is widely spoken here and is closer to a rough Italian dialect than French) which we did as we made a beeline to the patisserie to chow down some French ‘delices’! 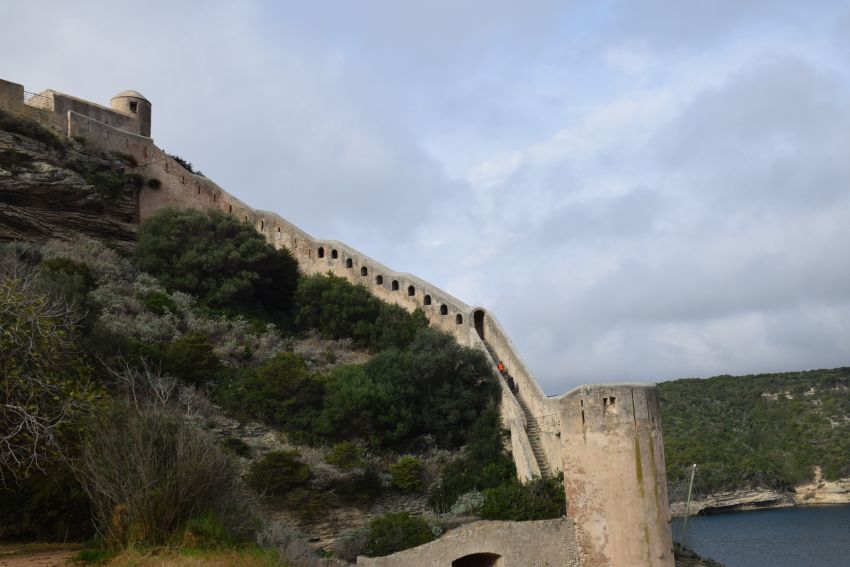 As we drove out of the town Chelle did some research on the Island as we had no idea about it, or where to go. First fact we learnt was that it has been strife-torn for some time now as the independence movement (the FLNC) battles with the French government – not unlike the troubles in Northern Ireland. 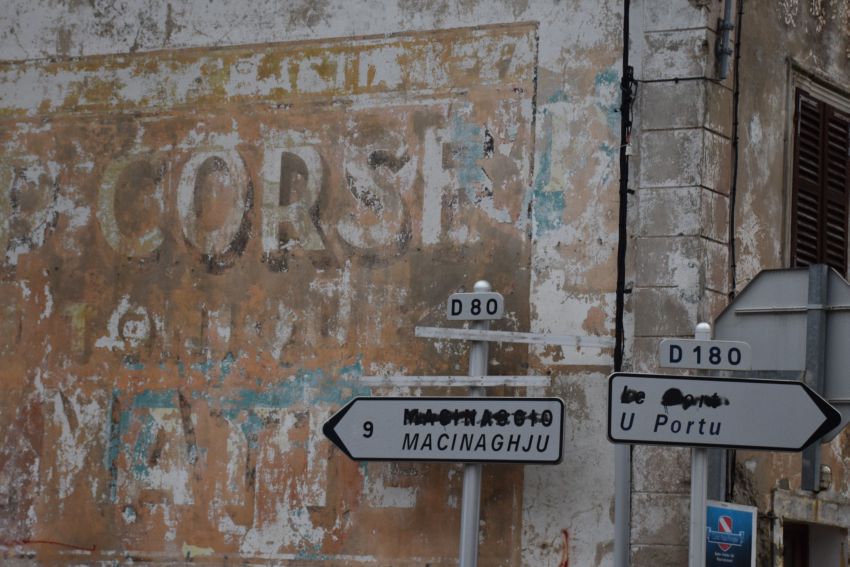 It has its own mafia network, every bit as entrenched and ruthless as the better known mafia groups in Italy. Bombings are common – on a single night in December 2012, two dozen tourist villas (vacant) spread over hundreds of kms of coastline were simultaneously blown up – rivals to the mafia’s development interests.

We also learned that it was nicknamed ‘Murder Island’ due to the sky-high homicide levels – 8 times that of mainland France. The island’s population is just 300,000 yet, 3 days after we arrived, someone was shot dead outside his front door in Ajaccio.

So, it was with some apprehension as we drove out into the country past the bullet ridden street signs, wondering where we were going to spend the night.

We drove through the gloom up the east coast making our way for ‘Filitosa’ – a giant megalithic carved head which looked a little like the Easter Island statues on the internet. However, after hours of difficult driving, we found the site and found it closed. Until April. Disappointed, we meandered back to the coast and found somewhere to park up for the night (waterfront but uninspiring… I think we are a bit spoilt these days!).

Next day was another driving day up the scenic coast road. Weather was still drizzly so we powered on and ended up in a little called place Piana. It was a beautiful hilltop village overlooking the sea and we followed the ‘no campervan’ signs to a nice quiet parking spot next to the football pitch. We wandered around the town, and bought a couple of things but found the people really quite rude. People just looked cross and we saw several semi-arguments between the locals. We felt anything but welcome until a bunch of boys aged 9 or 10, came down to play football after school as they do every day. James, Abbie and I joined in and I, in particular, was run ragged for an hour or two. 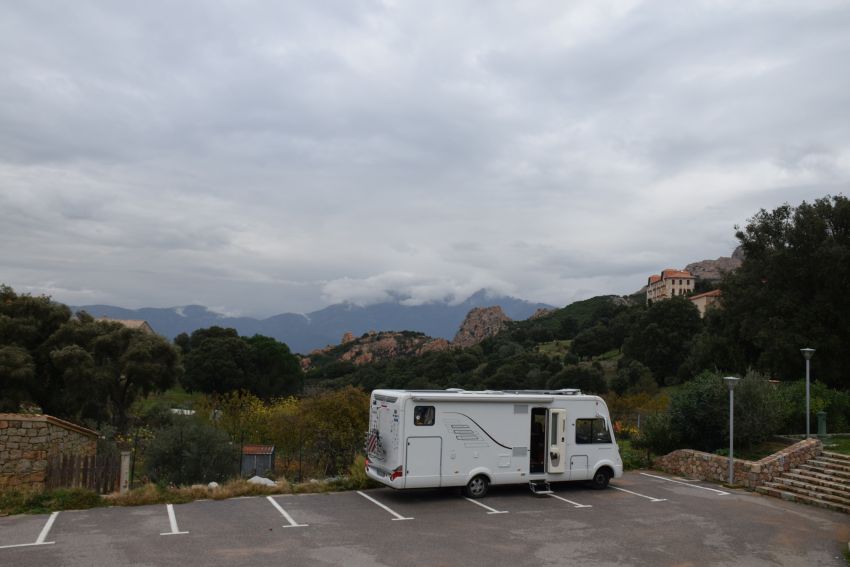 Next day we were up and at ‘em to tackle ‘Les Calanche’ – a twisting road hanging off some spectacular cliff formations for about 10km along the coast. 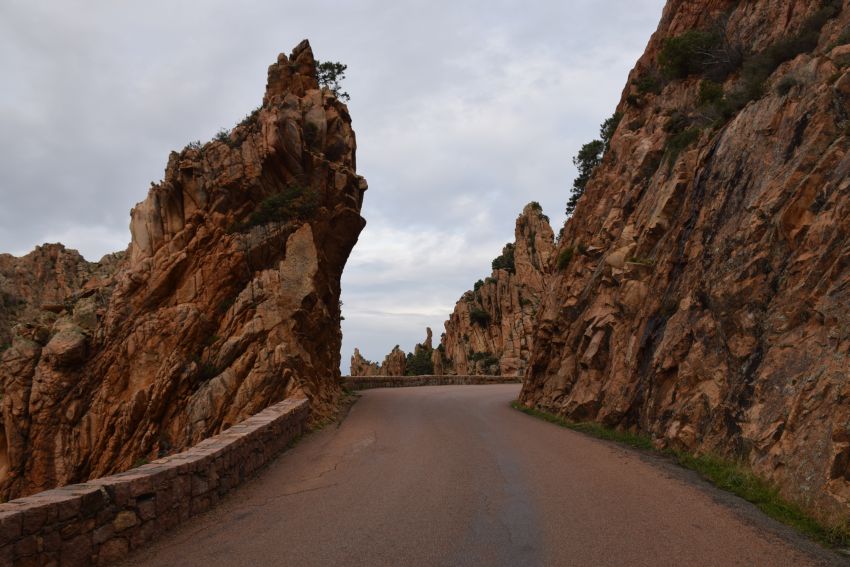 Thankfully no traffic to speak of

The cliffs are on the UNESCO list and were, indeed amazing to see. The driving was at snail’s pace but, having the road almost to ourselves, it was quite manageable. I wouldn’t dream of doing it in summer in a motorhome though! 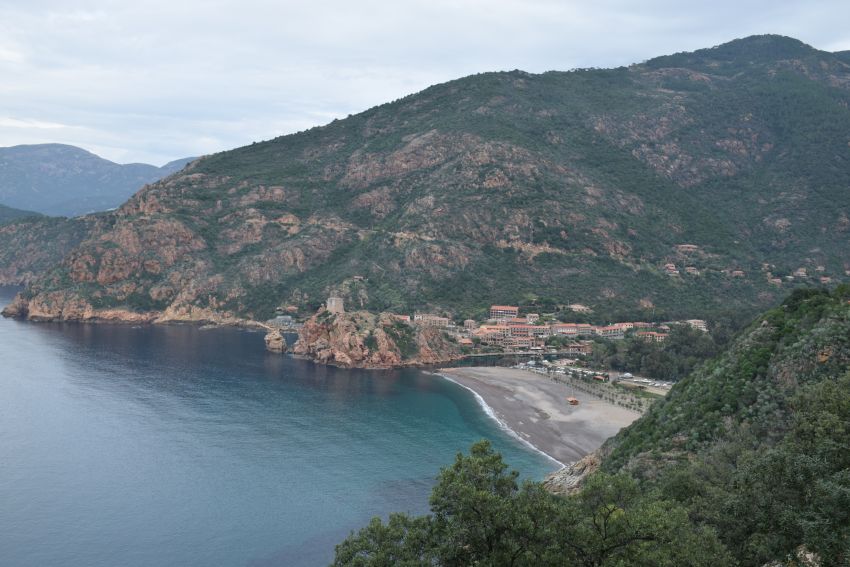 Beach along the way 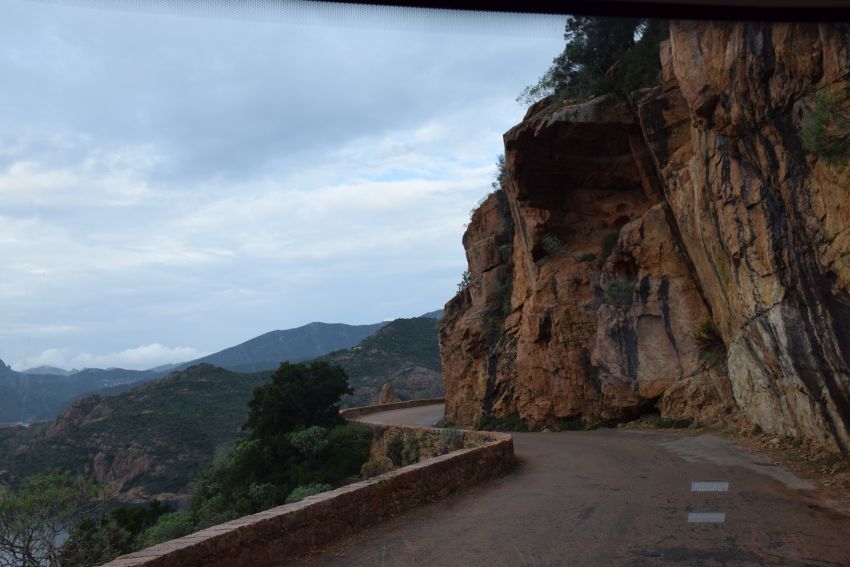 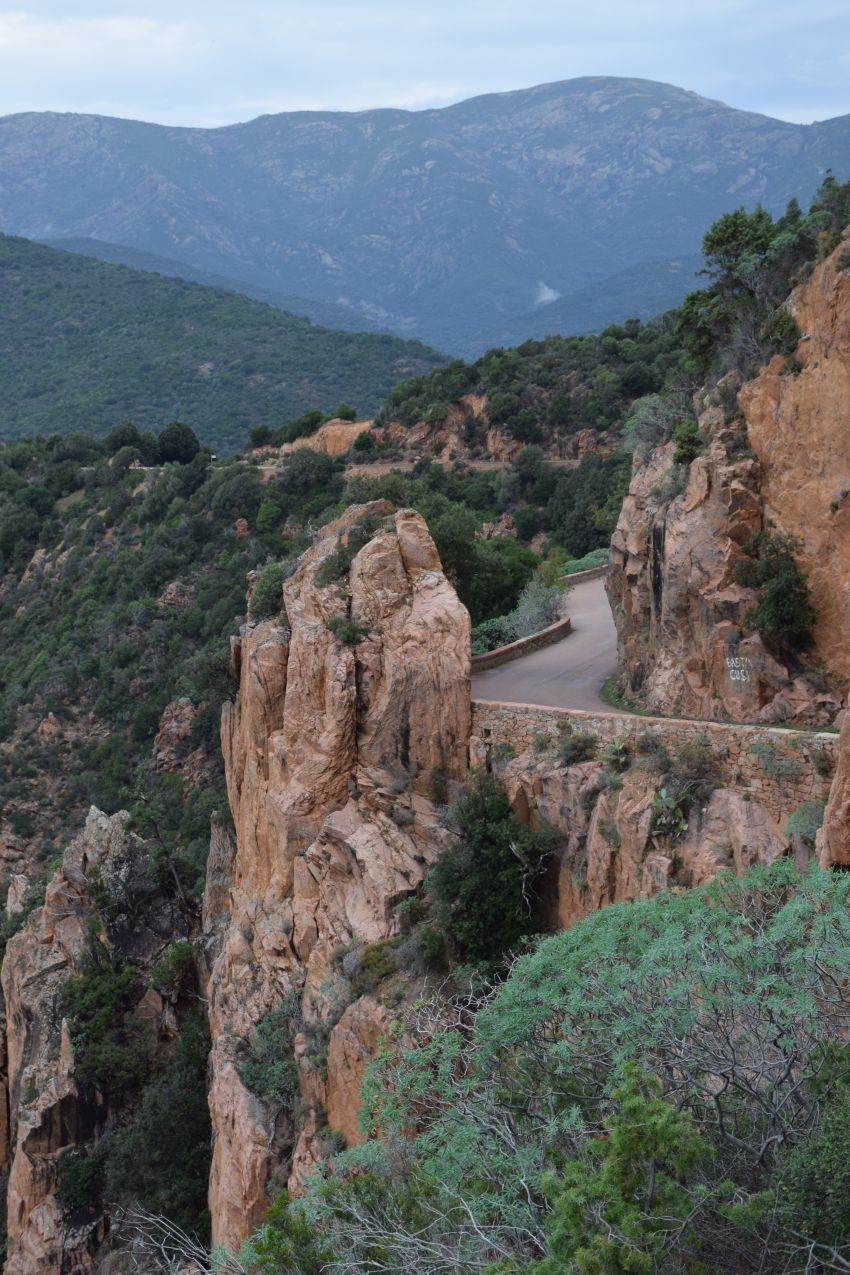 We carried on past the cliffs following the coast road north and arrived at Calvi for the night. 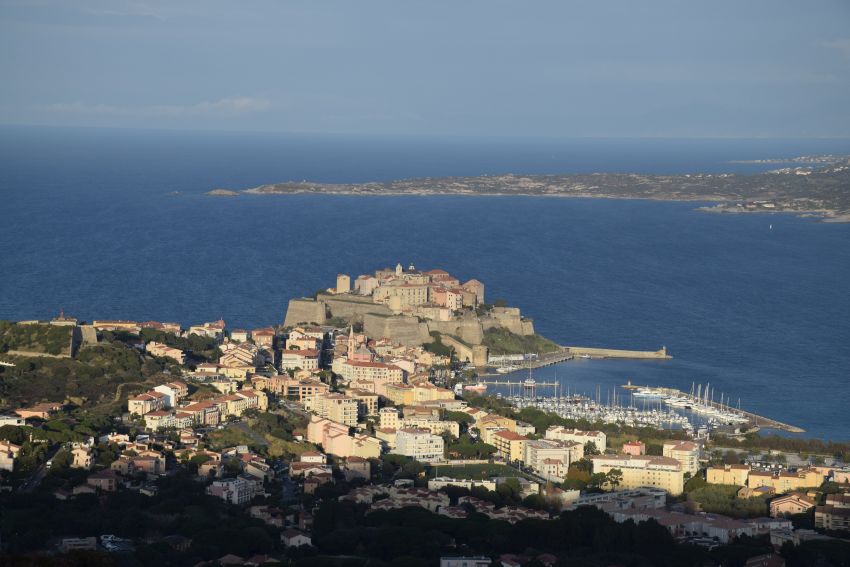 In summer, this is the in place to be on Corsica with dozens of bars and restaurants along the harbourfront. 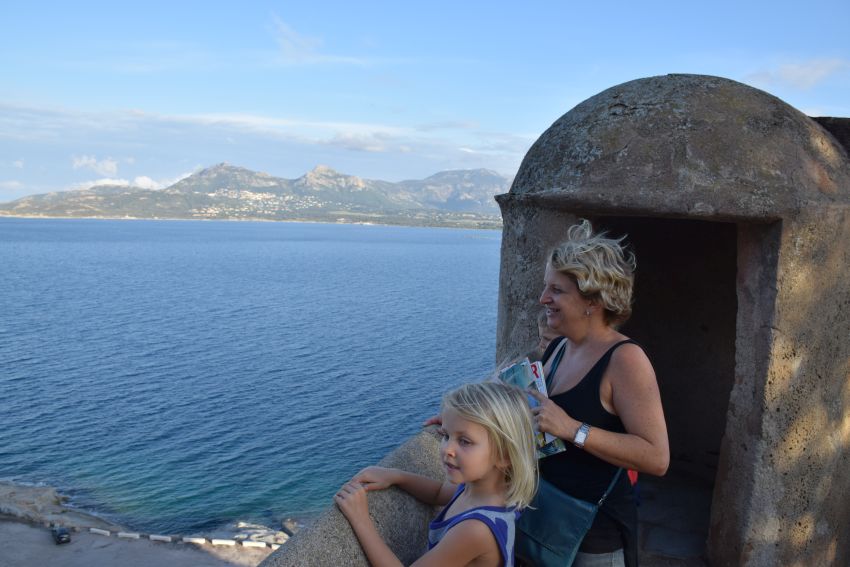 We had an explore around the town and the fort and drove up to the cemetery on the hill for a great view of the town before finding a car park with a lovely view to bed down for the night. 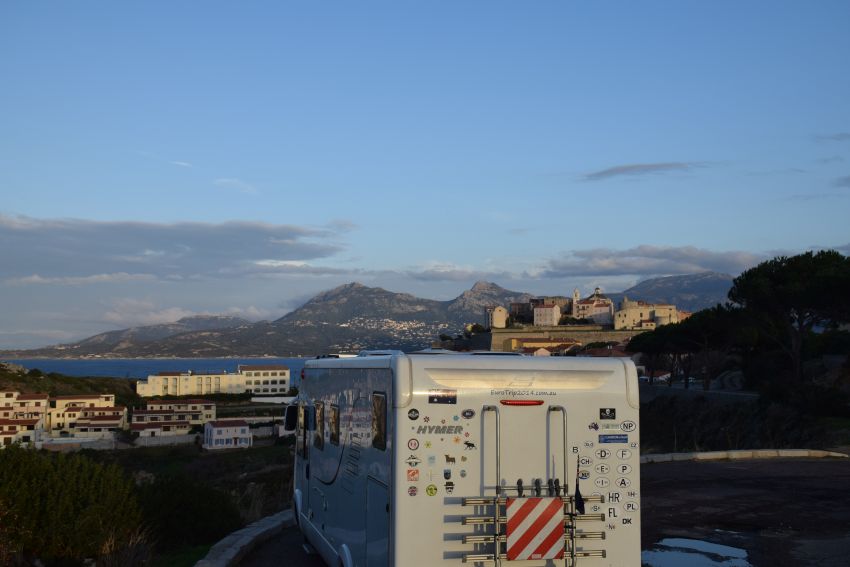 Spot for the night

I should note that we had been continuously hunting for places to empty the toilet and fill up with water with little success. There was not a single camping or camperstop open on the island as far as we could see. A BP service station had bailed us out down south but it was getting desperate again and we faced the prospect of crossing our legs until mainland France.

One way or another it worked out between holding on for toilets in cafés and scrounging water at the harbour and we drove on heading east in the vague direction of Bastia where we were getting the ferry the following evening. 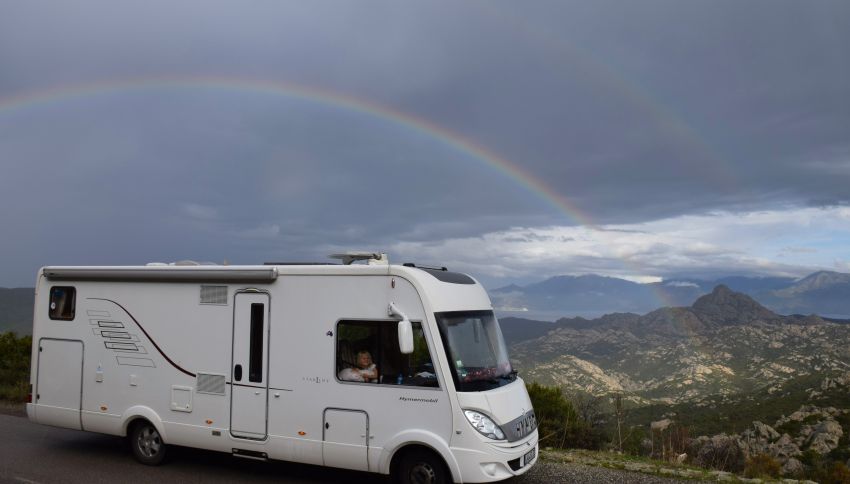 We passed through the pretty harbour town of St Florent and decided to head north and attempt to drive round ‘Cap Corse’ – the rugged cape at the top of the island. Again roads were flanked by a cliff on one side and a precipice on the other but next to no traffic meant we inched our way north seeing the incoming storm building out to sea. 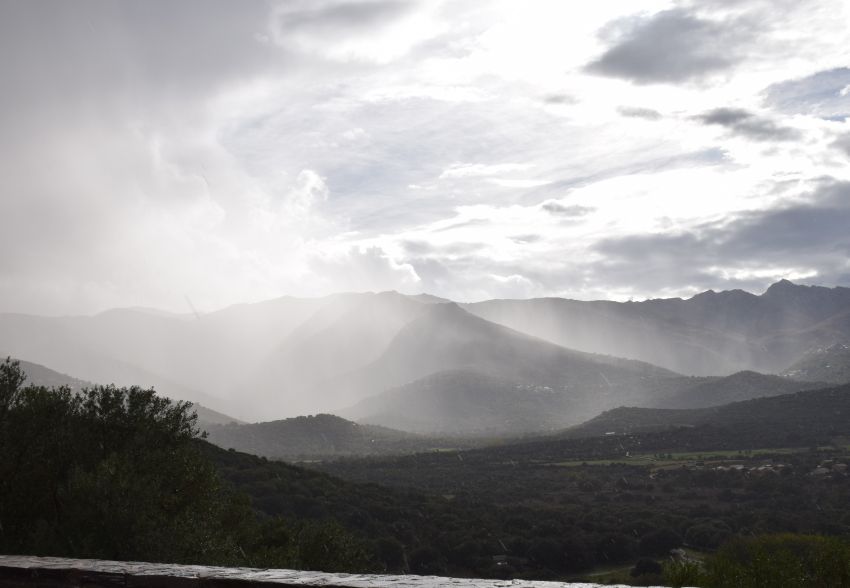 We ended up for the night at a tiny hamlet surrounding a pebbly beach that, by some miracle, actually had a chemical toilet disposal station for campervans. The fresh water wasn’t working but at least we were able to do the needful and park up on the beach and relax (it gets very stressful when your toilet’s out of bounds!). 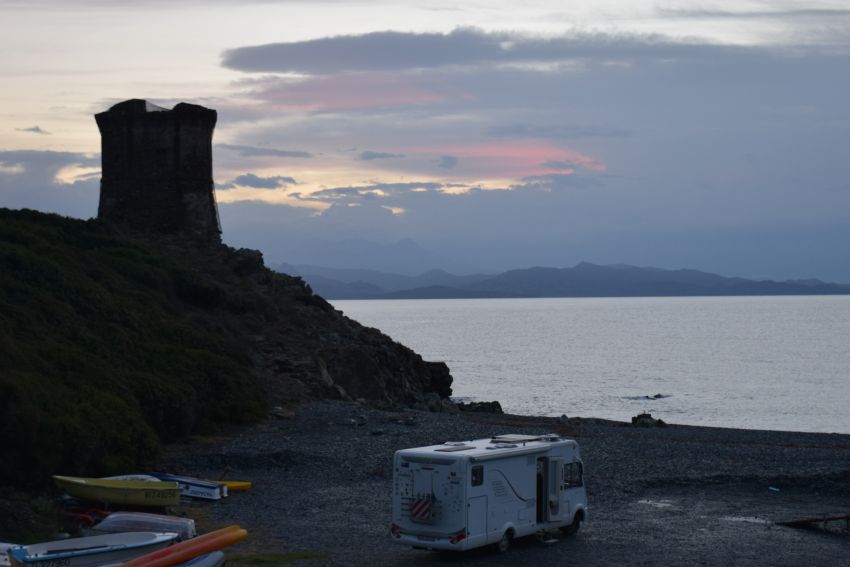 It threw it down overnight and when we woke the next morning and it was blowing a gale so we got going early planning to complete the ‘tour’ and get down to Bastia before the weather got much worse. It was pretty bad though and rocks, some the size of a small fridge, were littered across the road. We picked our way through but the fear was for one of these bad boys to come loose and hit us whilst driving. Or a full-on landslide. Or the road washing away. Or being blown off the cliff into the sea.

So, after holing up for a while in a little bar and chatting with the bemused locals who hadn’t seen a tourist since since September, let alone in an 8m rig in apocalyptic conditions , we turned off the coast road and took an inland road which took us east avoiding the top of the cape.

The wind was howling and the rain and hail came in incredible bursts but, on the plus side, once we hit the east coast, there was a tiny protected cove which actually offered a little 2-3ft wave. Swell period was about 5 seconds but it was clean enough so I paddled out and had a freezing 30 minute surf in the wild waters. The mainland of Italy was less than 100kms away so it’s hard to imagine that there would be anything remotely surfable unless the narrow stretch of water was whipped up by a huge storm like this. The rarity of such an event and the remoteness of the location, mean I am justified in claiming surfing’s equivalent of a ‘first ascent’ and therefore name the break – ‘Les Droitiers de David’.  Don’t try to find it – it’s secret. 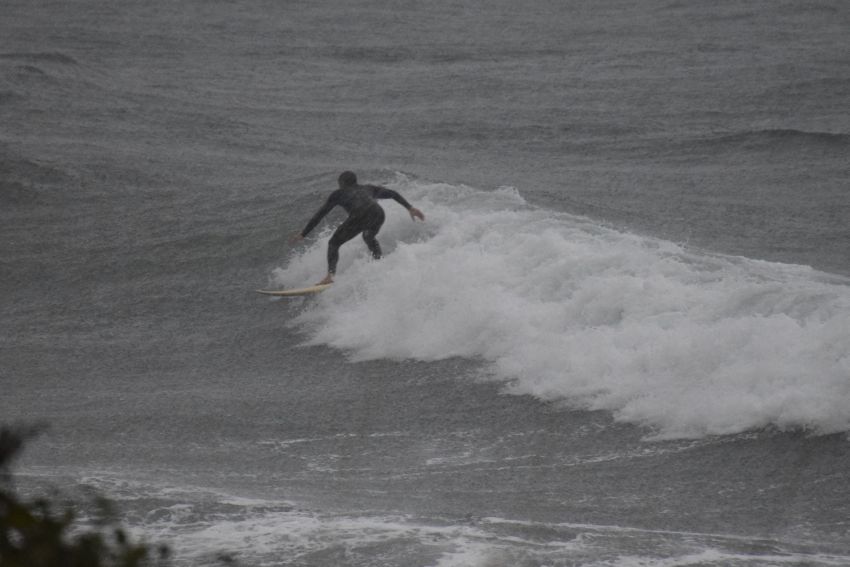 After indulging me with my final surf in Europe, we drove south down the much easier east coast and arrived in Bastia early afternoon well in time for our departure at 8pm. Turns out this was a good move as the storm intensified – it hammered down and roads into Bastia were flooded as we snuggled in a little café awaiting the departure.

The storm delayed the boast by about an hour and a half but we got on OK and found our little cabin to settle in for the 11 hr overnight crossing. Corsica had been an experience for sure. The people were somewhat difficult – very different from the open, friendly Italians we’d been used to. Nevertheless, it was well worth the visit and despite everything being closed, we’re glad we did it on the off-season when the population is a few hundred thousand, rather than the 2m+ in summer.