After a nice few days in Sweden and some much needed sunshine, the Good Ship Frosty headed west towards Denmark and Copenhagen. Before long we came to the Oresund Bridge connecting the two countries – an impressive 14km bridge that came with an impressive price tag – 100 euros for the crossing! 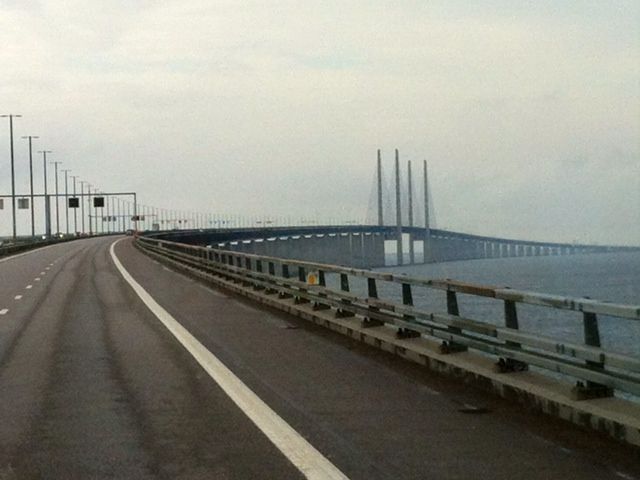 But it did whisk us straight into Copenhagen where, to our delight and amazement, we were able to swap our latest gas bottle from Norway for a full one and become self sufficient once again. This is the only time in our travels that we’ve been able to exchange bottles between neighbouring countries.

We were meeting my mate Paul who lives there with his girlfriend Margret so set the sat nav for his central address. However we hadn’t anticipated yet another gay pride festival and before long we were stuck right in the centre amongst throngs of gaily dressed partygoers, drinking and dancing around our van. Despite extending our 8 minute trip (according to the sat nav) to well over an hour, we weren’t in any rush and enjoyed watching the festivities.

As the party moved on, we were able to inch through and made it to Paul’s place where we were planning to park up for the night. A nasty parking warden put pay to that plan so instead headed to the hospital carpark as suggested by a neighbour (free and unrestricted on weekends).

Apart from seeing Paul, I really didn’t expect much from Copenhagen. It doesn’t have the most exciting of reputations compared to some of the other major European capitals, however despite the rain (and it hammered down – 120mm in 2 hours the first night – hard to describe what that sounds like on Frosty’s roof!), we had a top time.

Obviously seeing Paul and Margret, who generously gave up their weekends between work and study to show us around, made a huge difference. But we also found the people really friendly, especially in comparison with the rather reserved Norwegians and, to a lesser extent, Swedish.

As an illustration of these lovely people, two strangers baked us stuff within 24 hours! The first, Helle, was running a market stall and we got chatting about Australia where she had visited during the Olympics. A great character, she loved the kids and insisted on baking us all a tasty little fruit tart each! Then, that same night, we got chatting to Peer, the owner of the apartment we’d parked right outside. Despite us blocking his view, he’d already offered us water or whatever we need but that evening he popped around with a freshly baked homemade loaf of traditional Danish bread! Delicious for brekky the next morning. 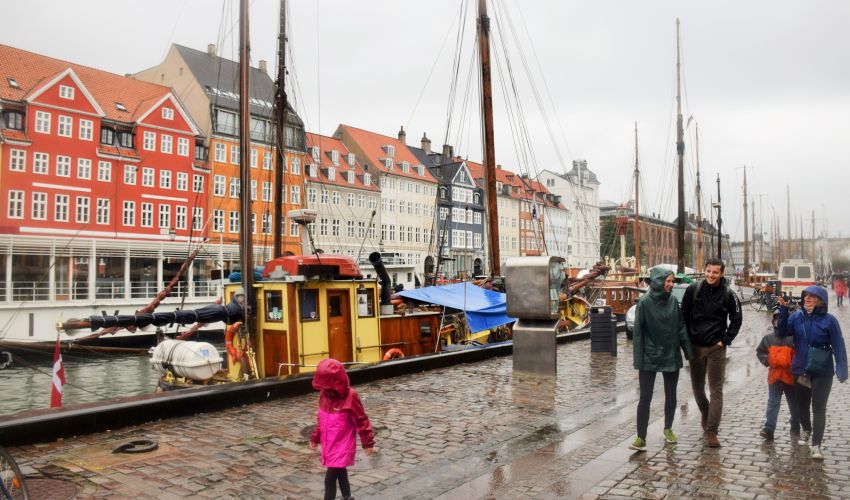 Paul & Margret kindly braving the weather to show us around

We also met and went out for dinner with Paul and Margret’s friends and generally had a great time, finding some buzzing little bars and restaurants, thanks to the local knowledge. Unfortunately, the poor weather meant a bit of a lack of photos for Copenhagen.

The rain finally cleared but we had to move on, next stop Odense, home of Hans-Christian Andersen. En route we were stung yet again by another 100 euro bridge toll but at least we were close to escaping the sky high expenses of Scandinavia!

Odense itself appeared to be a rather average university town but we did visit an excellent exhibit which was an old preserved Danish village (called the Funen village) from a few hundred years ago. 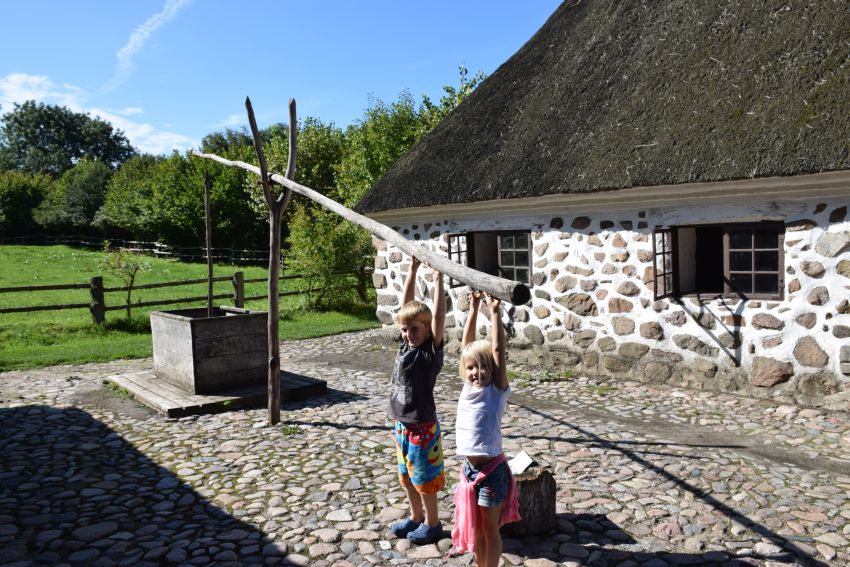 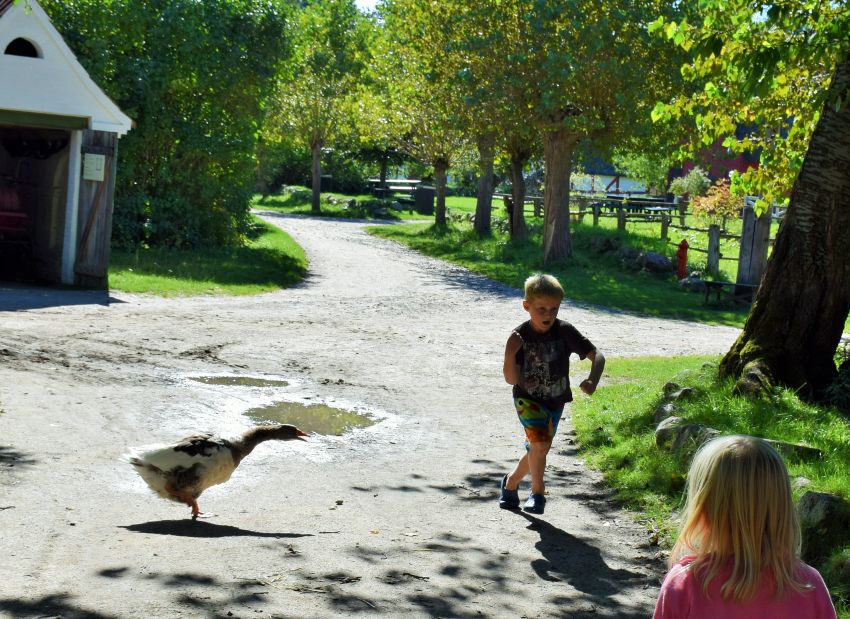 Enjoyed wandering around there for a few hours – it was well presented and very hands-on. 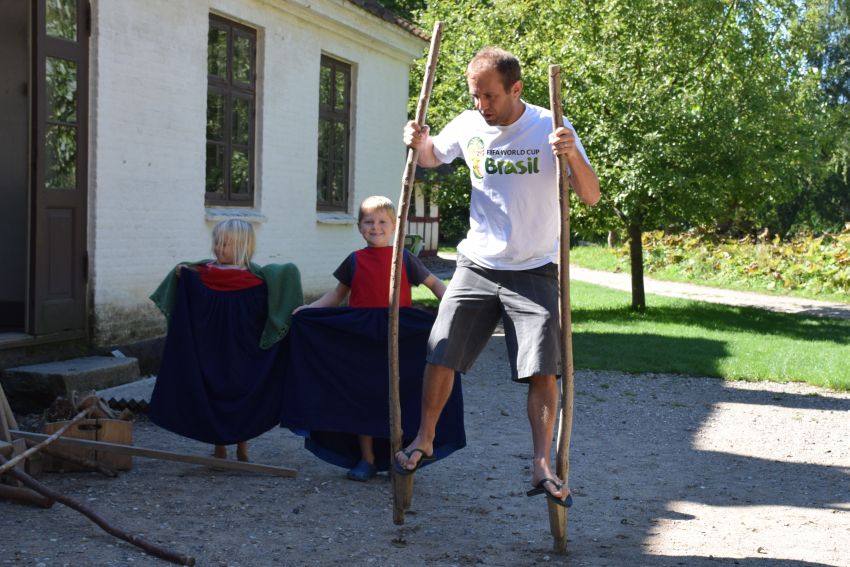 Highly recommended if you are ever there!

Now, just to bring us up to the kids’ posts on Berlin, squeezing in a quick report for the first few days of our return to Germany.

We were disappointed with our first stopover – not because the Stellplatz had any issues but it was outside a swimming pool which we planned to visit the next morning. After getting up early, completing our morning jogs we headed to the pool in our cossies at 8:45 to find the pool was closed for cleaning between 9 and 10am. We couldn’t be bothered waiting so we bailed, direction Hamburg.

Hamburg was never on the list of must-sees but during our travels we’d heard plenty of good things so we decided to make a stop on our way to Berlin.

Very glad we did – it is a great city that appears to be moving successfully from a drab industrial port city (well, that was its reputation anyway) to a vibrant centre well worth a stop on the tourist trail. 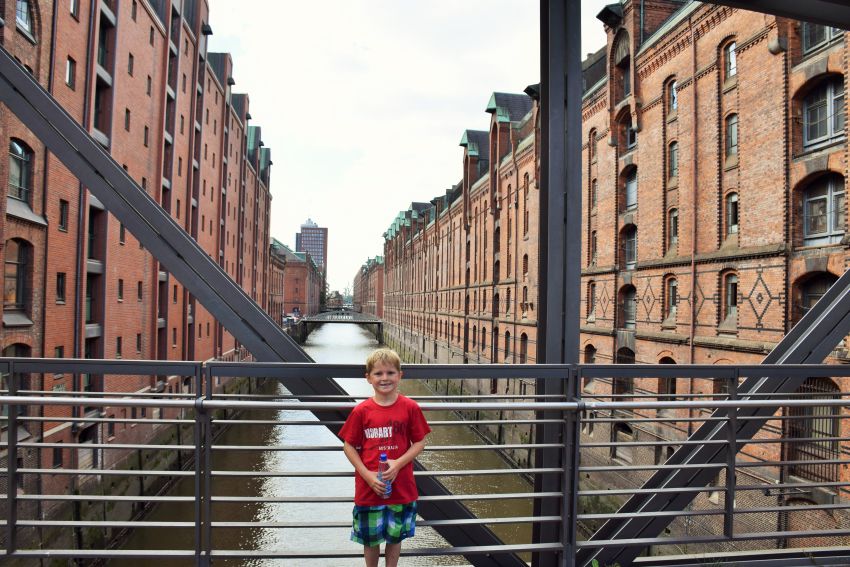 We ended up parking for the night right in the heart of the industrial area. Would have been a horribly sparse and remote location but for the fact that it was right outside a 100 year old pedestrian tunnel under the river which took us straight to the city. Rare to get such a well located free camp spot in the city. (PS, not for the first time, I forgot to lock the van while we are out all day!) 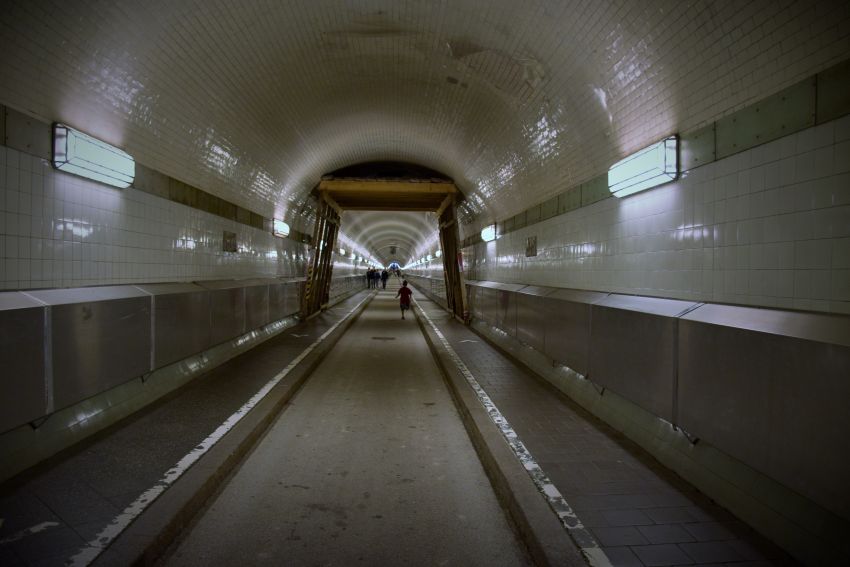 The city was great – nice buildings and lots going on in the busy main square. We wandered around, enjoyed a coffee, then later a curry wurst (herring sandwich for James as he’s gone vego) and icecream. 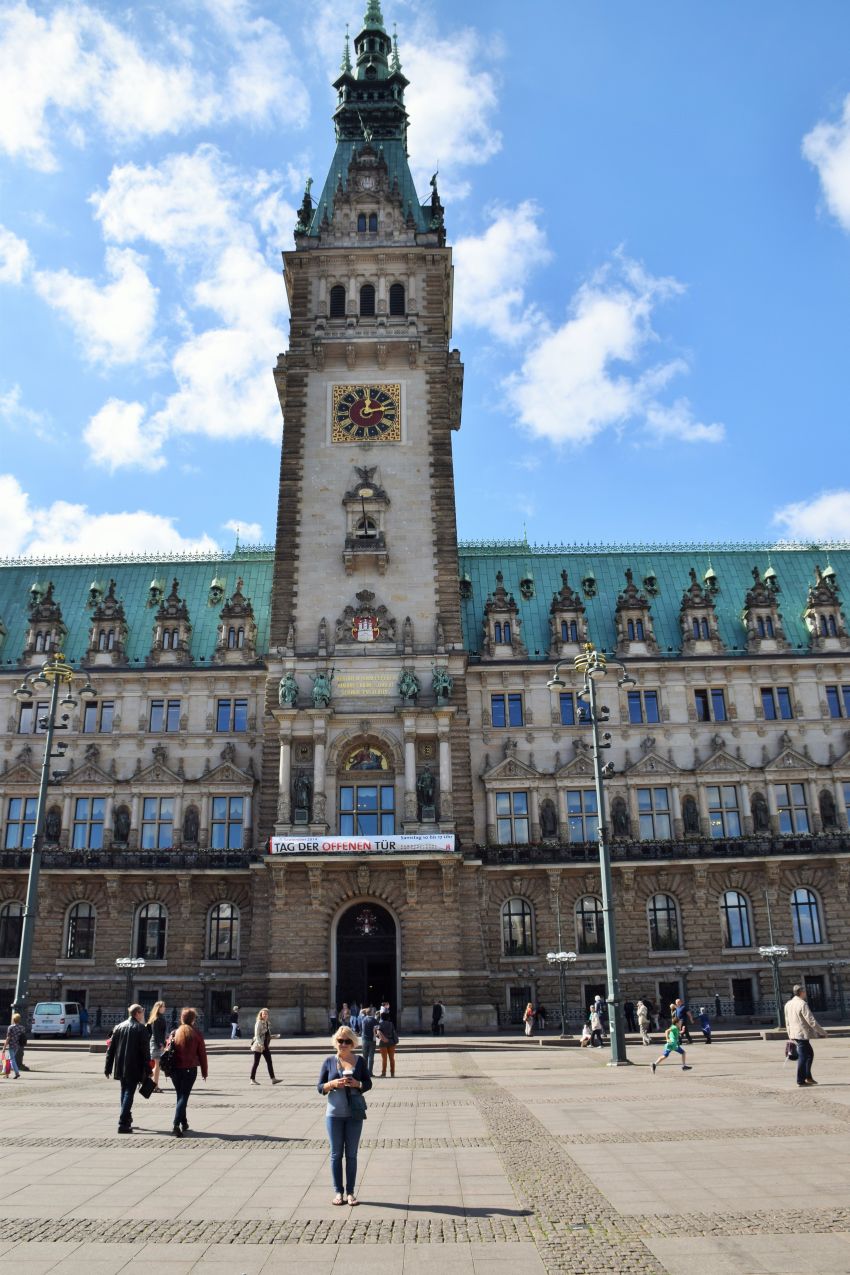 Chelle in front of Hamburg Rathaus 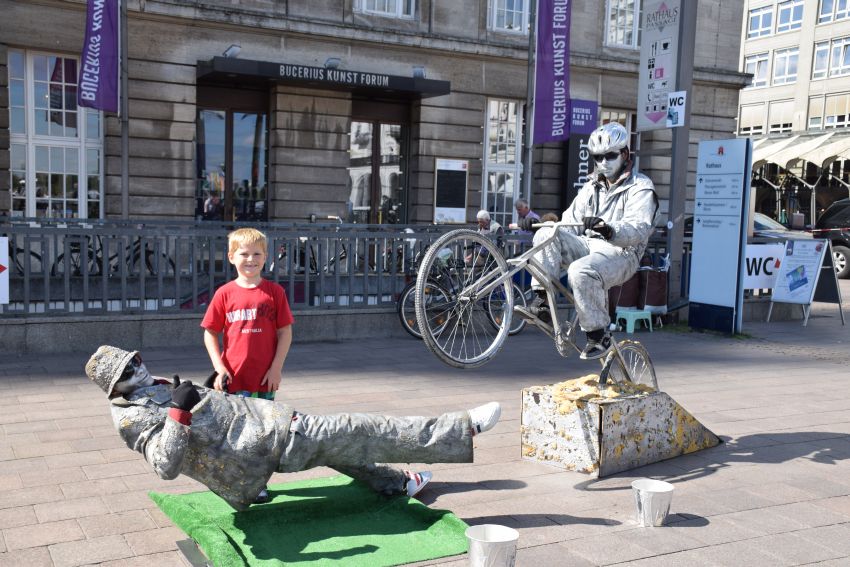 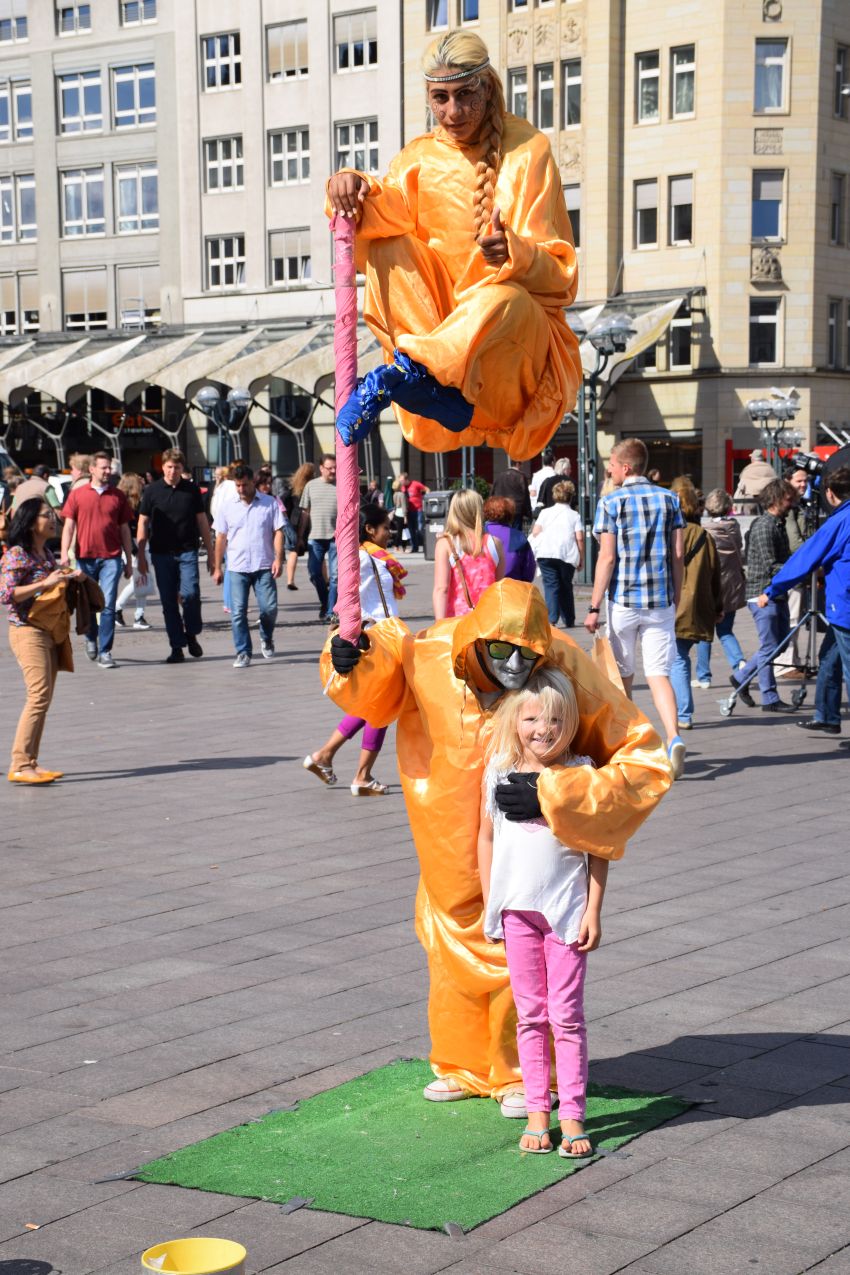 We found an amazing kids play park – best we’ve ever seen and toured the city centre on a public bus (Number 111 for future reference. 9 euros for all four of us compared to about 15-20 euros each for the ‘Big Red Bus’ which follows a similar route).

We then headed to the highlight of our fleeting visit to Hamburg – ‘Dialog im Dunkeln’. This is basically a tour around a complex which contains all sorts of everyday things – a house, fruit market, boat etc. There were 8 of us in total and we were led by Andre who showed us around for 90 minutes. The difference is, the whole tour was done in complete darkness. And I mean absolutely, not a suggestion of light- black, black, black. However, all was not lost because Andre is completely blind and has been since the age of 12 and unfalteringly guided us all around as we tapped about with our white sticks. 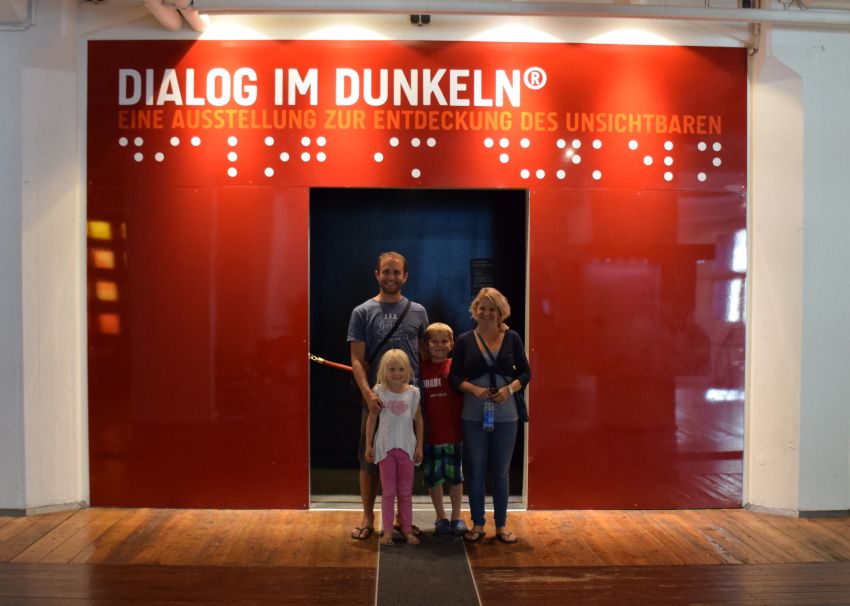 The tour was a feast for the sense, sight excepted. We experienced life as it is for the blind, relying on our sense of touch, hearing, and smell to get around. We also had to learn to trust Andre as he held our hands and guided us up a boat ramp and onto a wobbling boat. It was an amazing experience for us all and ended up in the bar where we had a drink and a packet of crisps… as always completely in the dark. After the drink, we said goodbye to Andre and, after a series of airlocks’ emerged into the light. One funny thing was that we never actually saw Andre, the guide into whom we put our entire trust in for nearly 2 hours. We said goodbye while we were still completely in the dark. But, in hindsight, it seems entirely appropriate that we knew him only by the sound of his voice and the touch of his guiding hands.