Following on from Chelle’s blog here http://eurotrip2014.com.au/the-european-shower-experience/, here’s a report on a standout from me…

An old rundown campsite in regional Poland.  The ‘amenities block’ was like what you’d expect 60 years ago in Eastern Europe, which was clearly what it was.  Instead of updating or cleaning, the strategy appeared to be just to pile on another layer of thick toxic enamel paint over the dirt and cracks.  It was so thick, and I guess due to the moisture and heat, didn’t properly set.  So much so that my mate Ben’s towel got covered with white stuff after he hung it over the door frame.

Anyway, the interior of the building – like something out of Saw.  A B-grade horror film scene – the layout was basically a long corridor with dank moist walls and a row of perhaps 20 urinals along one side.  Curiously, at each end was an old green wooden hatstand.  At random points on the other side of the corridor were toilet cubicles and/or wash basins and the odd shower cubicle. 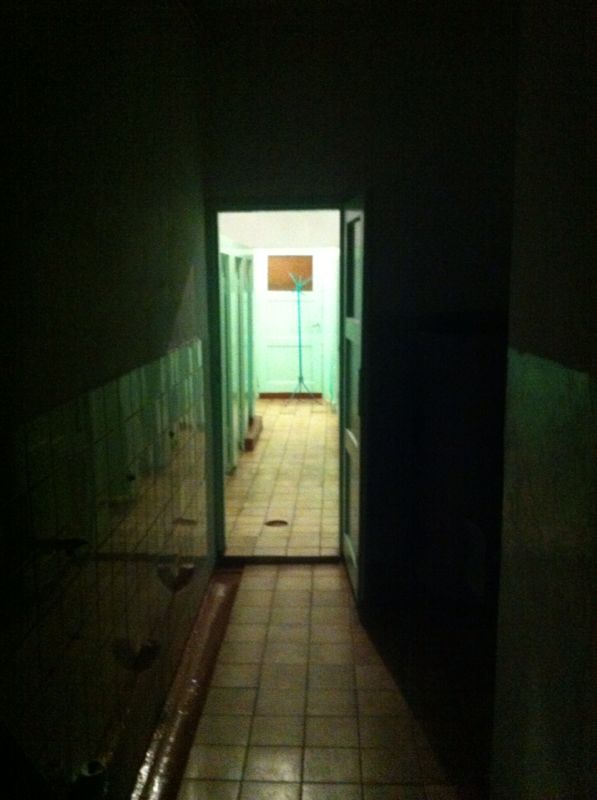 It’s like something you might expect at a Russian orphanage in the 50′s – the campsite was small, and, although the Polish drink beer like water, 3 urinals would have been quite adequate.  Or maybe it was a converted prison with cells turned into toilet cubicles.

You couldn’t actually open the door the whole way due to the toilet bowl so it was necessary to open the door until it hit the toilet, squeeze through the gap and into the corner and then finally close the door.  The toilets were the ‘ledge’ variety where rather than hitting the water, everything landed on the ledge awaiting the final flush.  Seen these toilets a lot round Europe and the main problem is that, inevitably, you tend to leave marks, as you may expect.  However, this is where the Polish toilet came into it’s own.  The flush was not a handle but actually required you to squeeze two levers together upon which a tremendous Niagara Falls of water would explode into the bowl.  If the campsite was converted from an old orphanage as I suspect, I hope no poor kids copped a bogwash in these bad boys.  The flush was more than a visual experience though – the release of such pent up pressure caused a chain reaction throughout the pipes in the cell block.  It sounded like a plane was trying to land and you could even feel the building vibrate as 50 litres of water passed through in a matter of seconds.

Then we move to the shower.  James and I braved them on a cold cloudy morning.  We found two adjacent cubicles at the end and jumped in past the sticky mouldy shower curtains that seemed to have a life of their own trying to give us each a cold, ghostly embrace.  Then we began a fruitless game of trying to find the right temperature.  I was in first and set the temperature to an acceptable level.  But then James turned his shower on and got his temperature right which turned mine to freezing.  I then upped my heat which then in turn put his to freezing.  He then turned his off in panic which moved mine to scalding.  And back and forth we went – fruitlessly trying to negotiate and engineer a solution for both of us.

Out we came feeling dirtier than when we came in to find an old Polish woman hunched over sweeping the floor right outside the shower curtain (so they do clean!).  Undeterred (we had no options) we both got out, retrieved our towels and clothes from the hatstand and tried the perennially tricky task of getting dried, then getting dressed without letting ends of trousers drape in the wet floor.  This was particularly difficult in this environment as the floor just wasn’t wet, it was about a cm deep outside the cubicle in the main ‘room’.   There was no angle on the floor.  For all the building’s faults, they’d done a superb job with the leveling and the concrete floor was as flat as a billiard table.  So, while my thong actually floated away, I battled, hopping around on one foot, one leg through my trousers trying to dry my other foot with the towel

Will this take the prize for the worst of the trip?