Frosty needed more time to be fixed up so a couple of weeks ago, we booked flights to Bordeaux so we could come over and catch up with the Speedies on their half term break. All went smoothly and we arrived in Flaujagues on Sunday afternoon as the clan were finishing up at the local brocante. 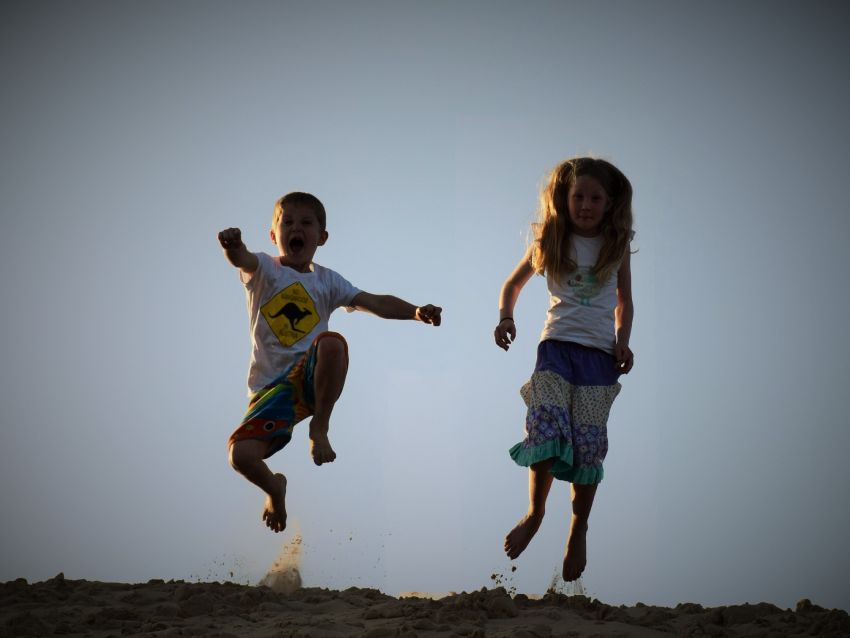 A lovely four days were spent in beautiful weather and great company. The kids ensured they spent every single minute together from the moment we arrived. One thing that James & Abbie have very much missed this year is being around kids their age so they had a ball with their cousins who they love so much. 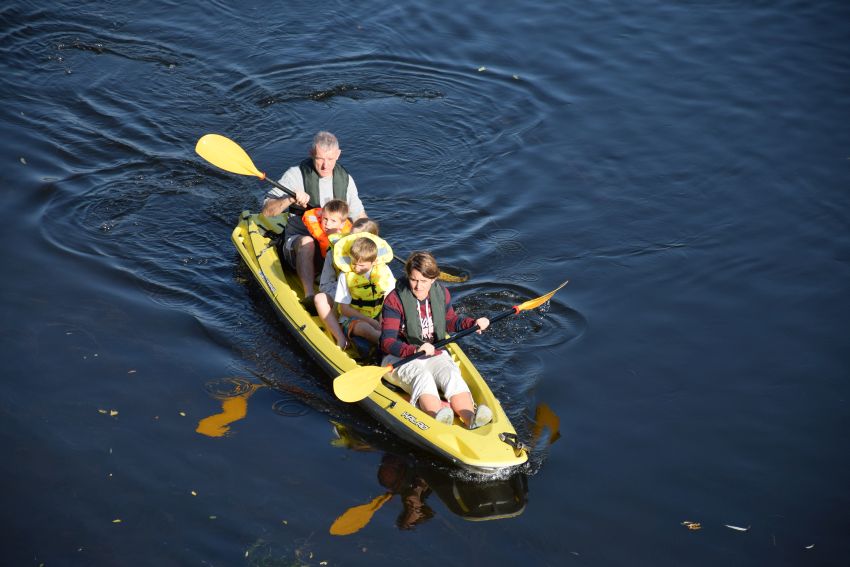 The four days and nights flew by as we enjoyed walks, biking, kayaks on the river, plenty of pool time and even a trip to Biscarosse where I was lucky enough to get a surf in and we all followed it with a trip to the Dune du Pilat – Europe’s biggest sand dune. 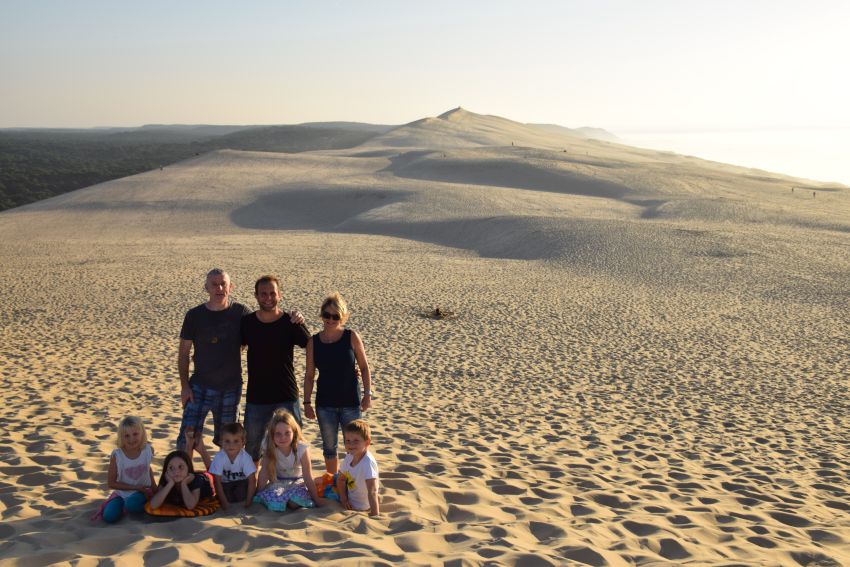 Was so nice just to hang out at the wonderful house enjoying the space and the views (www.francehouse.co.uk – now taking bookings for 2015!!)

Then it was back to Rome to pick up Frosty and Cadiz. However, we froze when Chelle was asked whether she needed a visa when boarding in Bordeaux. Thankfully, she kept her cool and said ‘no’ and we were waved through. Reminded me of Obi-Wan Kenobi and a Jedi mind trick.

We’d stuffed up our timings and arrived back late in the evening when the dealership was closed so we stayed in a cheap hotel around the corner from the airport. Will never forget that short taxi journey – we topped out at 115km/hr in a 40 zone!

Next morning, we were all glad to be back in our home. 4 of the 7 problems had been fixed up including all the major ones so that was OK. Have to live with the grey water being stuck open for the rest of the trip which means creative parking and/or a bucket to hand.

Having done our dash in Rome, we took the scenic road south and ended up following the coast as it began to get dark. We turned off and headed to the see and ended up parking in a tiny hamlet on the beach. 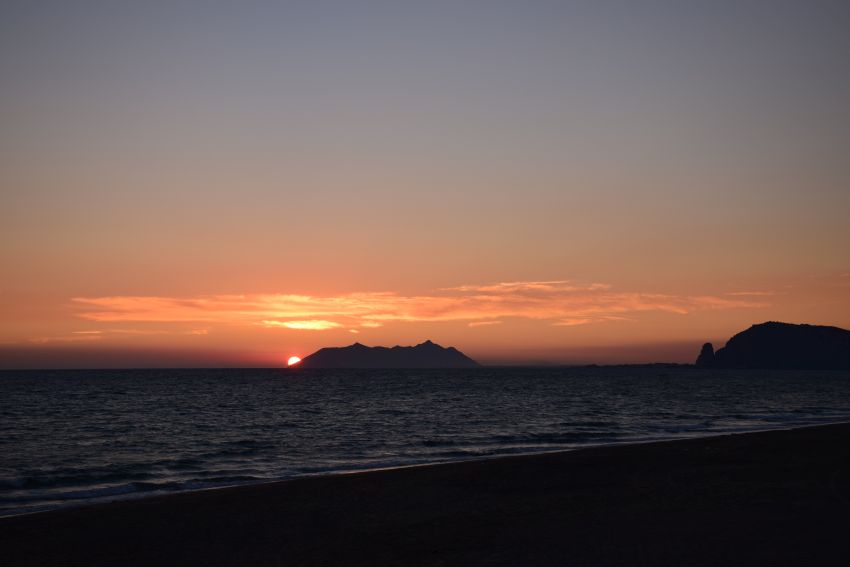 Nice spot by the beach

It was Halloween but the kids and I were only able to find one occupied house for trick or treating. The old lady looked confused but eventually coughed up some sweets. A far cry from Trevor Rd.

Next day was quite a drive as we powered to Napoli in order to catch the Napoli – Roma football game that afternoon. There was one ACSI campsite nearby in the town of Pozzuoli (as an ACSI member, this means a charge of 14,16 or 18 euro per night for 2 people off-season) which we homed in on with 3 dirty washing loads at the ready.  We ended up staying a few nights and met some lovely people including a young couple from Scotland who kindly gave us an old book (big deal as English language books are hard to come by!) and John and Christine – American bikers who are currently living in Kaiserslautern, Germany (John is in the band for the US army base there).  They were a very friendly, interesting and kind couple but we love them especially because they have agreed to look after Dizzy after we go!  So looks like we have a loving home lined up and we won’t have to engage Operation Plane Smuggle (I’m serious!) after all!  We will catch up with them early December on the way to Hamburg. 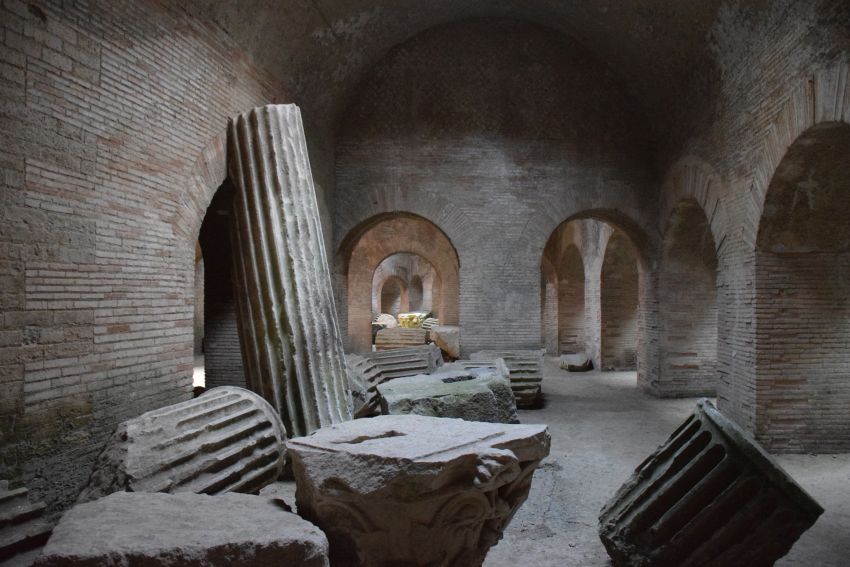 It was a great little site, well placed for visiting Napoli & Pompei and best of all was situated inside the crater of a volcano! As you would hope, the volcano is now extinct but just a hundred metres of so from our spot there were bubbling mud pools and sulphurous vents billowing out steam. Made for a smelly but enjoyable stay. 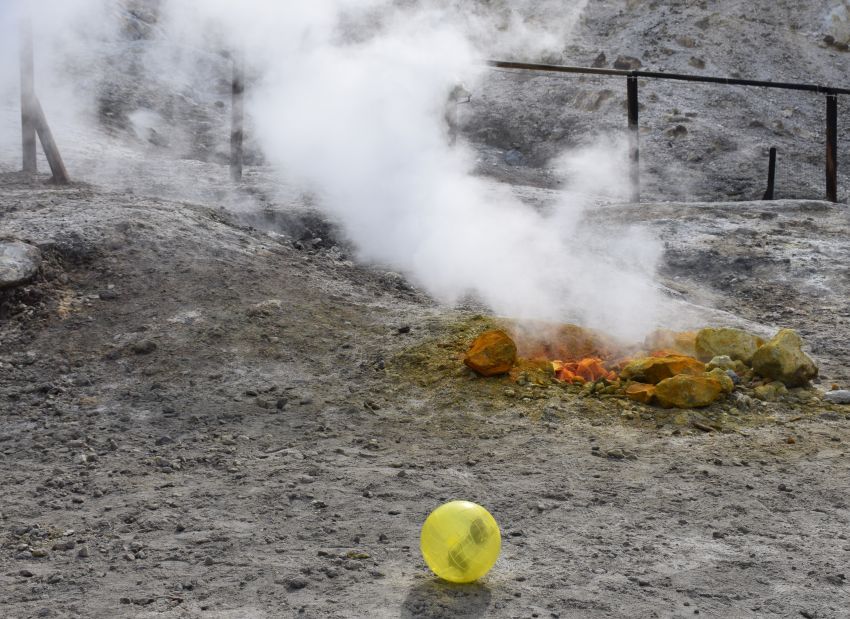 Cadiz – the only Spanish, vulcanologist hamster in Italy. Guaranteed.

I should add as well, entry was through a stone archway that was just, just tight enough to squeeze through. So tight that I needed a person each side squeezing the wing mirrors in as I inched through. It is not an exaggeration to say there was max 3mm each side (Note: During our stay I got the screwdriver out and removed one of the mirrors completely for a less stressful exit!).

As soon as we’d parked up, we were out the door for the game. Metro dropped us right outside and we successfully procured tickets through the very bizarre sales process which I still don’t understand (only one official outlet with just two booths and passports required for all, yet next to no queue… not sure how 99% of the fans got their tickets).

The game was great – 2-0 win to Napoli but it could have been 3 or 4 with shots pinging off the woodwork and open goals wasted. Although only 36,000 fans (stadium holds 60K) and strangely not a single Roma fan, the crowd were in full voice. Even in the family section where we were, your average AFL or NRL fan would have been seriously intimidated by the noise, colour and the passion. Expressive by nature, the Italians gesticulations and cries rose to caricature levels. 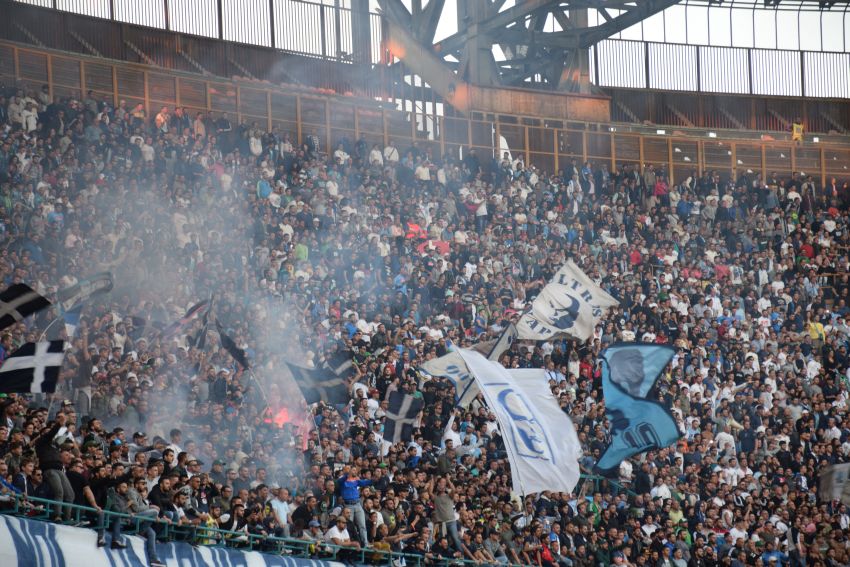 We retreated back to our peaceful campsite and spent the next day catching up on schoolwork, washing & charging all our gadgets. Abbie and I managed a midnight adventure in the volcano and even saw a friendly fox amongst the dozens of cats and kittens (apparently, the fox is fed by the campsite people and never bothers the cats).

Next day, we hit the big ticket item of Pompeii. Weather was glorious and we enjoyed exploring the ruins for several hours. It is a truly amazing site that has been immaculately preserved thanks, of course, to the eruption of Vesuvius nearly 2,000 years ago. What did surprise us was the size – we’ve seen plenty of medieval cities this year but Pompei is massive in comparison – city sized in today’s terms. 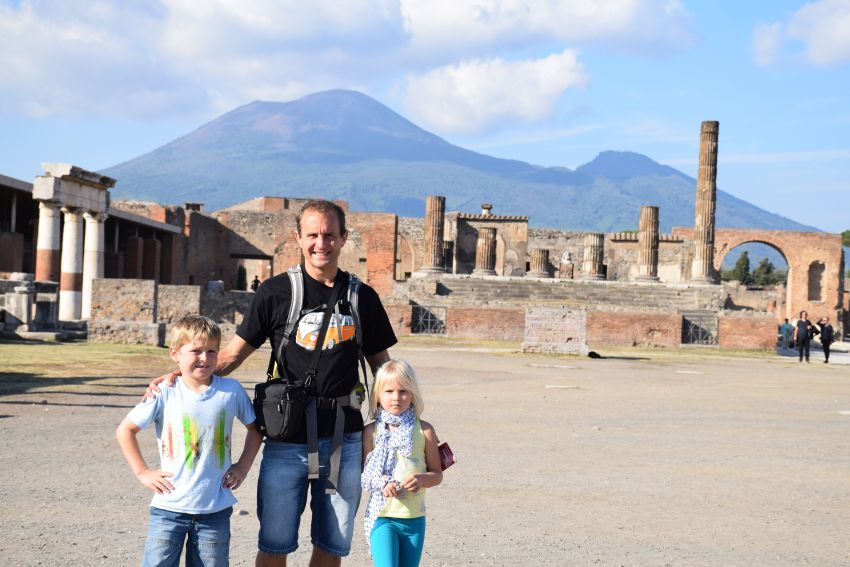 Pompei with Vesuvius in background 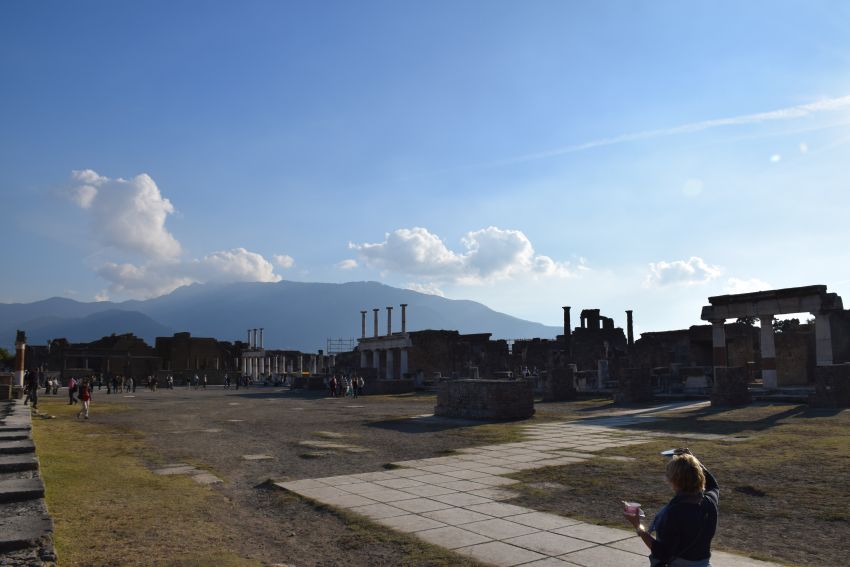 For our last day, we went in to check out the city itself. Compared to all of the big cities we’ve visited, Naples is very different. It’s no glamour – traffic is utter chaos, there’s rubbish everywhere and it’s clear that many of its 1m inhabitants struggle to get by. But, I actually really liked it. It’s a nice reality check after the postcard cities of Venice & Rome. There was always something going on, people bustling and hustling about and very few tourists. 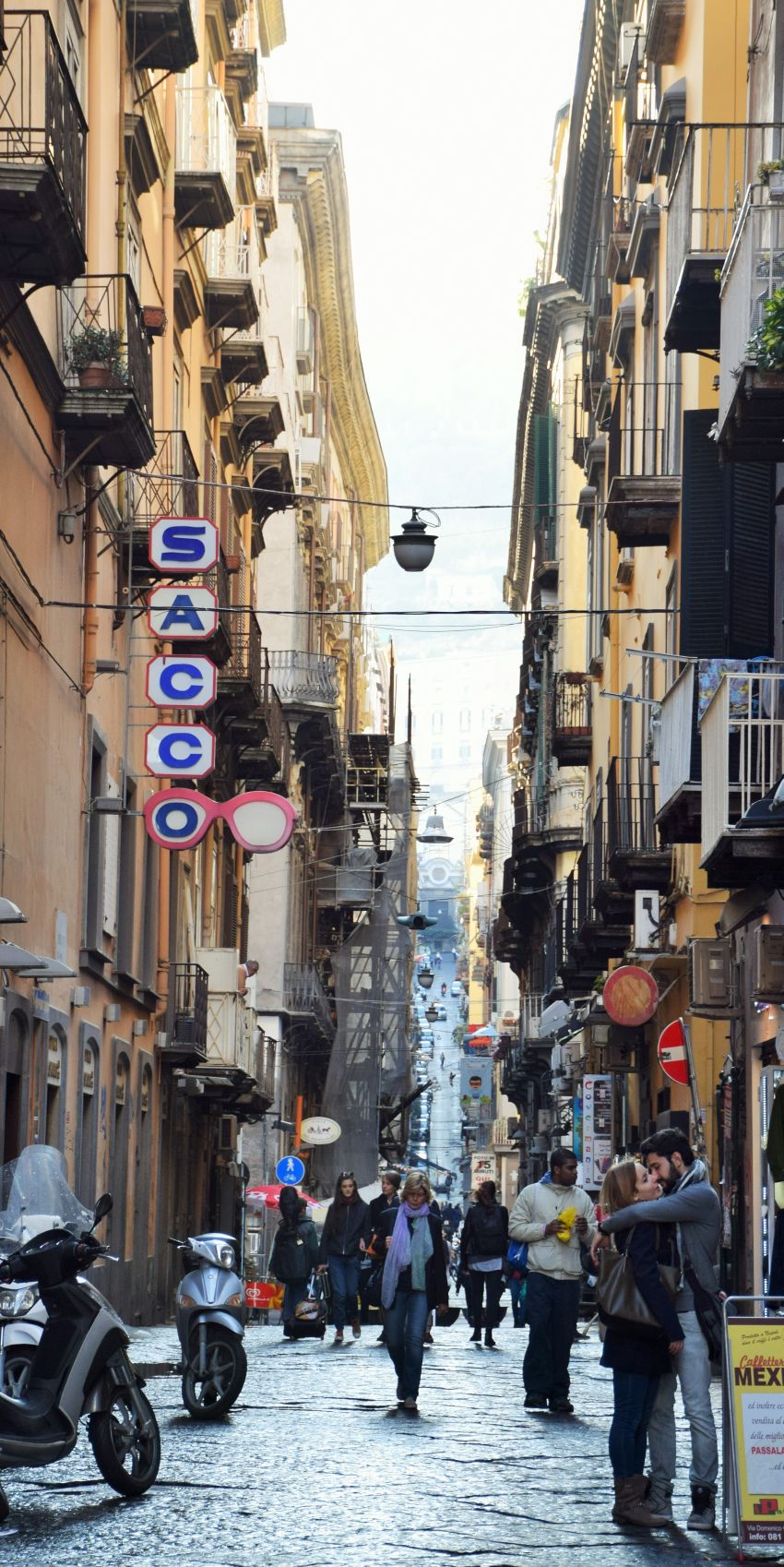 Love on the famous Spaccanapoli

Naples invented Pizza and we wanted the best so we joined the queue in front of L’Antica Pizzeria da Michele – a classic old-school joint. The menu has just two pizzas to choose from – Margherita or Marinara for 4 Euros a pop and beer, coke or Fanta for 2 Euros. And yes they were great pizzas!! 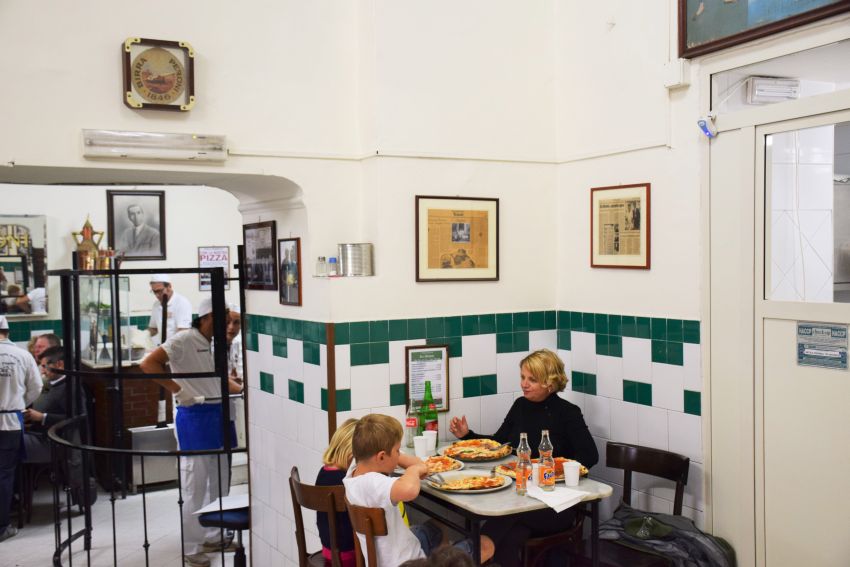 Time to move on from gritty Naples so we followed the coast road down towards the ritzy Amalfi Coast. The Amalfi road is famously narrow, windy and dangerous so it was a relief when we discovered campers are actually banned from using it so we would be forced to park up and take the bus. However, finding somewhere to park the van for a couple of nights proved problematic – the only campsite open in Sorrento wanted 38 euros a night, another option was a desolate parking lot several kms out of town for an outrageous 30 euros. Sorrento in the off-season in the gloomy weather didn’t look very attractive and the forecast was for heavy downpours over the next few days (Rome had just been heavily flooded and it was on its way down) so we decided to ditch the Amalfi altogether. The coast road and beachfront towns were never going to suit this weather. 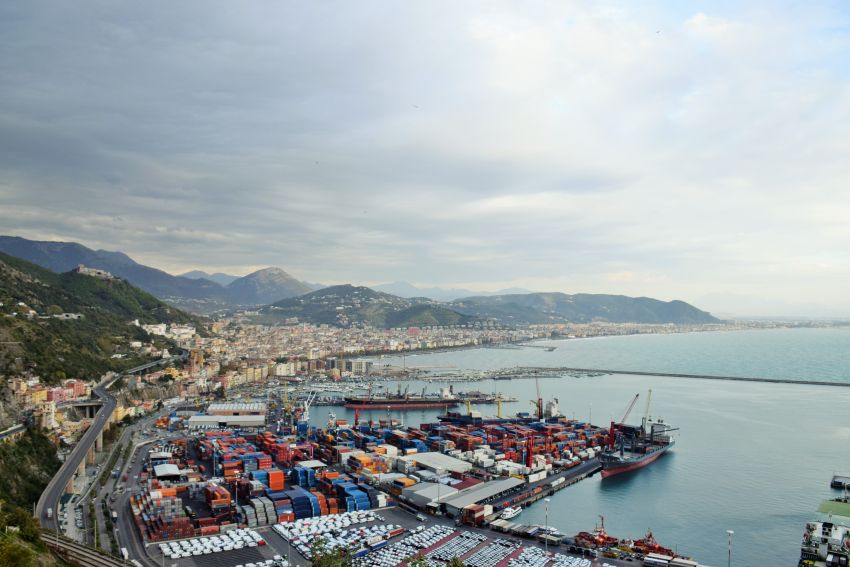 Sorrento – nice from afar but… nah

So we about-faced and drove east heading for Matera on the other side of Italy. As it was approaching dark, we spotted a half ripped sign saying ‘Sant’Ang…’ with a faded picture of a nice building on it. Then we saw the sign for Sant’Angelo le Fratte so we turned of the ‘main’ road and wiggled our way into a tiny village in the middle of nowhere. Shutters opened, crowds gathered and people gawped as we drove straight into the tiny piazza. However we asked the locals and they didn’t have any problem with us parking up so we eventually manoeuvred Frosty into a semi level spot for the night narrowly missing knocking over the town statue in the process (NB if that had happened, it would have meant the slowest getaway in history as we negotiated multiple 5 point turns to get out of town!). 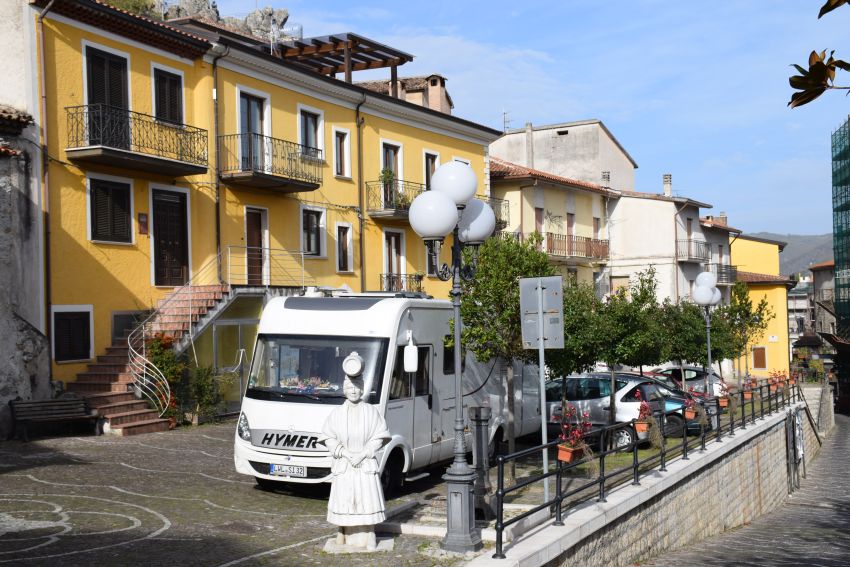 Inconspicuous behind a tree

When freecamping like this, the worst thing you can do is park up, pull up the blinds and put the telly on. So we headed straight out, armed with key-ring koalas to inspect our surroundings. Once you get past the staring, the people were super friendly. We had a drink in the tiny bar and bought some bits and bobs from the minimarket ‘Buena Sera’-ing everyone we came across.

‘Conversations’ abounded – the guy in the fruit shop gave us all a mandarin, the lady round the corner came loaded for croissants and sweets for the kids. Then the fruit guy gave the kids a couple of bananas to boot. All the time people, especially the old, Italian mamas, jabber away to us at 100 miles an hour! We’ve noticed this is unique in Italy – even when you establish that you can’t speak Italian (‘Scusi, no parla Italiano’), they just carry on regardless. A 10 minute conversation can be had and sustained by the use of nothing more than a ‘va bene’ or ‘grazie’ every so often. It’s really quite sweet.

As for jabbering on, I’ve excelled this morning (a 3 hour boat trip will do that!) so signing off from a wonderful little village in Italy’s heartland.