After Berlin, we headed to a promised treat for the kids – a swimming pool and slide complex called ‘Tropical Islands’ about 60kms out of the city.

Well, we were blown away by the scale of this thing! A giant self-contained dome with an unbelievable array of structures and activities within. It felt like something that would be built if man had to holiday/live on Mars or somewhere without an atmosphere. 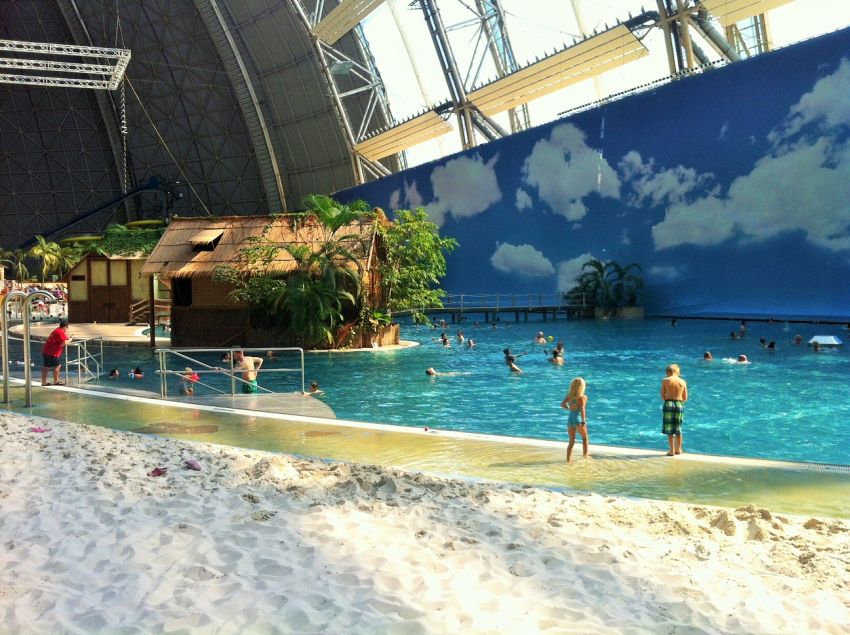 Inside were apartments & cabins (some for sale), a campsite, rainforest with live flamingos, hot air balloons, a cinema, live shows, a beach and, of course, lots of pools and slides. Great for an afternoon but I don’t think I could cop a week’s holiday there as most of the Germans seemed to be doing.

We left the surreal life-pod and aimed for a nearby campsite to get our washing done. Lovely location on the lake and great for a jog around but a very unfriendly welcome from the owners. Unfortunately this seems to be a trait from German campsites who are only used to having German guests. Ah well, 2 loads of washing done and all devices charged so job done.

As the rain started hammering down, we drove south to the ‘Feengrotten’ (fairy grottos) of Saalfeld. Another moderately bizarre experience which involved dressing up in funny elf/fairy costumes and taking a tour through these old abandoned mines, apparently the ‘most colourful grottos in Germany’! 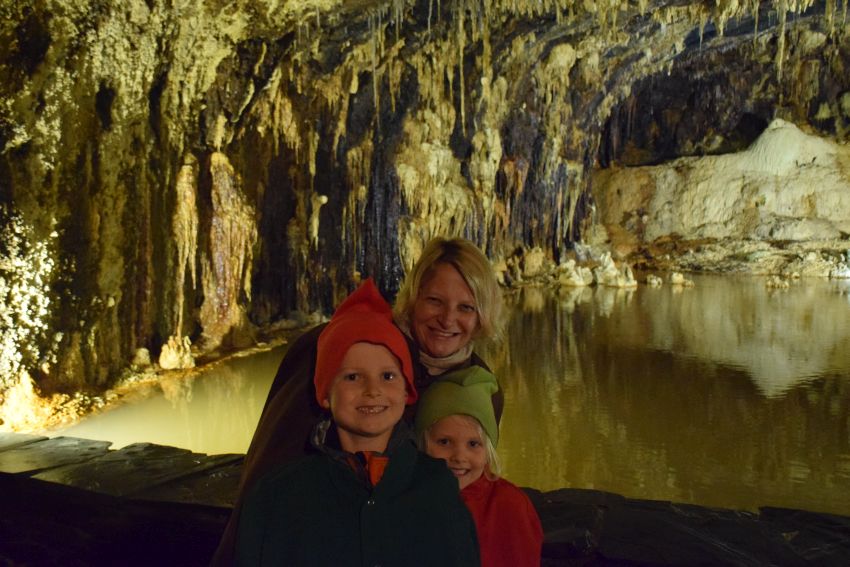 Anyway it was an unusual and interesting diversion – although the tour was in German we made do and enjoyed the visit despite the OTT fairy vibe throughout. Good spot for a rainy day. Leaving late in the gloomy skies, we found a rather unremarkable spot to park up for the night nearby in the fields. 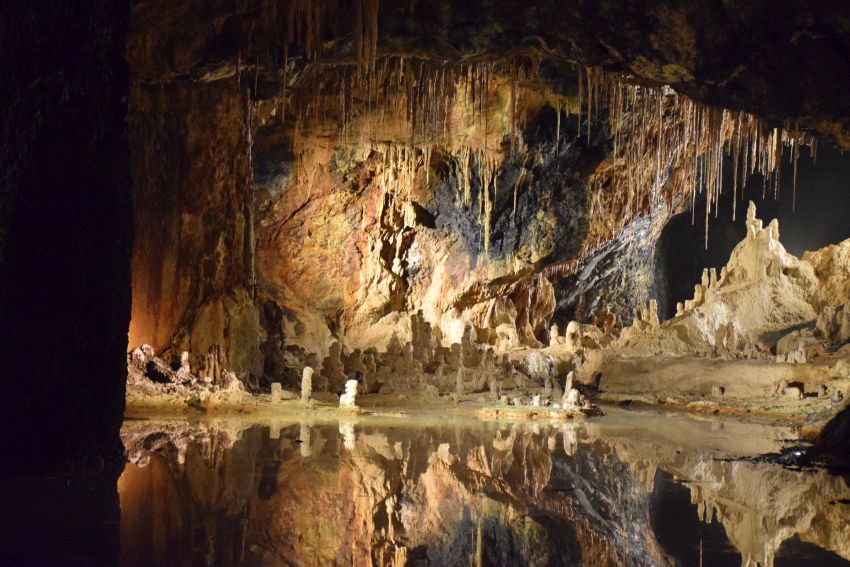 Next up was Wurzburg, a medieval city in Northern Bavaria. We parked in a carpark to wander into the town for a few hours and ended up staying 3 days! It is a lovely city but was made all the more special by the fact that the annual street music festival had just kicked off when we arrived. This meant that there was a huge variety of music on pretty much every street corner, together with pop-up bars and food stalls and an all-round party vibe. 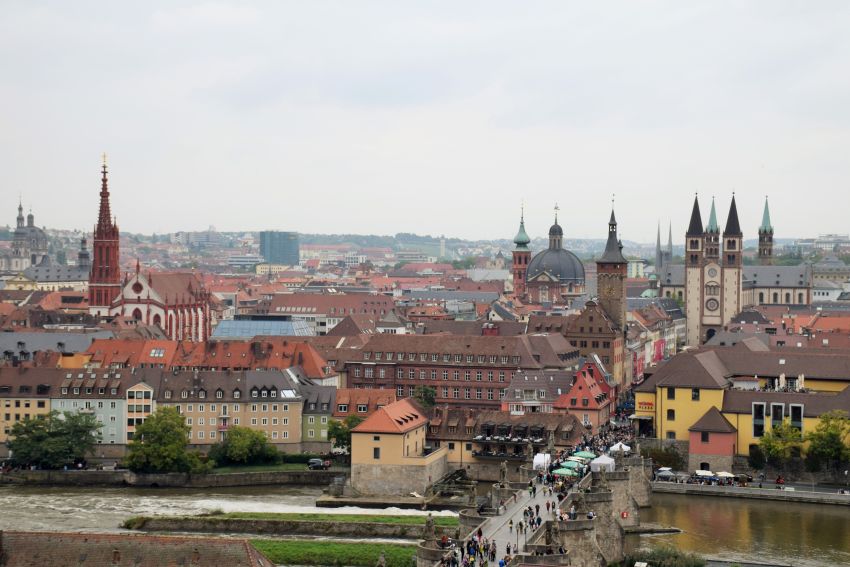 Highlight of our stay were the local fortress, Marienburg Festung, which afforded a lovely view of the city and a bountiful source of conkers and walnuts. Due to James’ recent conversion to vegetarianism, we had lunch at a little café called ‘Vege Bros’ which was super-healthy and very delicious. The kids and I also visited the ‘Residenz’, a grand palace with acres of lovely gardens and grounds, also bearing gifts of walnuts. 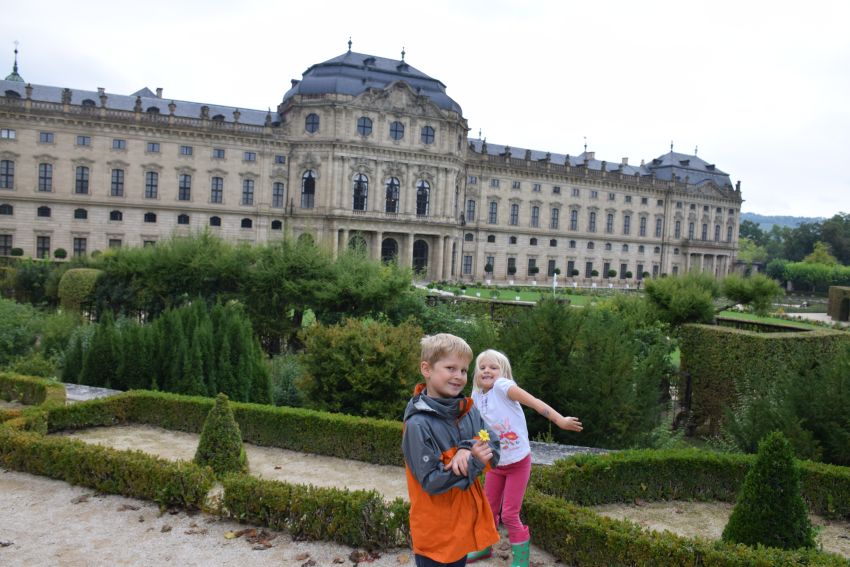 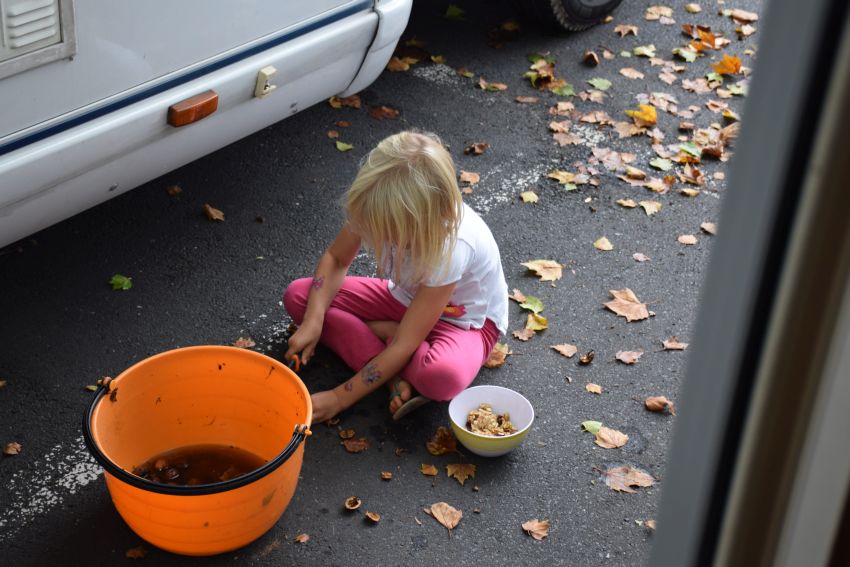 By chance we realised we were at the start of the ‘Romantische Strasse’ a Tourist Board-invented route south which passes many of the beautiful medieval towns along the way. So we turned the sat nav off and followed the signs. Within an hours or so we stumbled across a ‘kircheweih’ in a tiny village and pulled over to join in. It was basically a little get-together to celebrate the consecration of the local church and involved a big beer tent with accordion music and a few fairground rides so we obliged by stopping by for an hour and enjoying a drink with the locals. 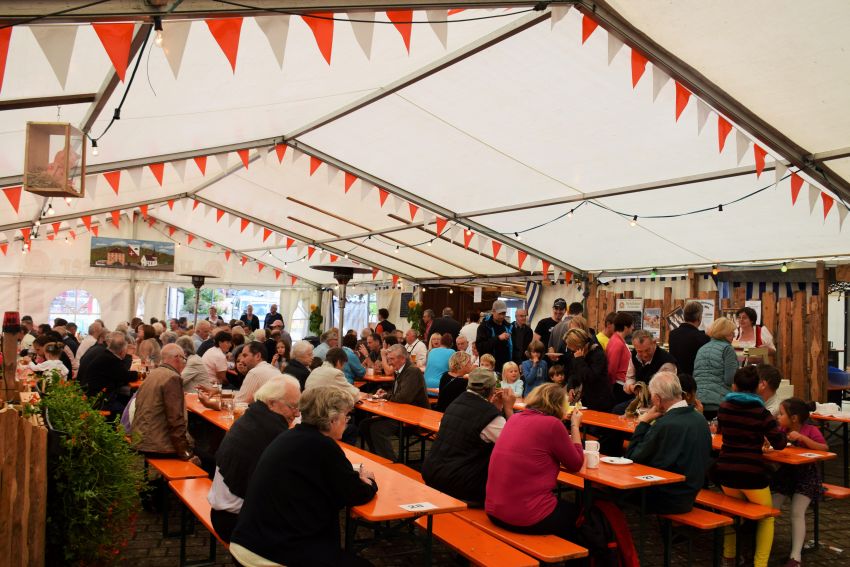 The first stop for the night was Rothenburg ob der Tauber an exquisite 800 year old walled medieval city. We parked up in a stellplatz just outside of the city walls and, that first night, I left Chelle and the kids for the ‘night watchman’s tour’ – an candlelight city tour led by a guy with a halberd (funny long two-sided axe thing) who gave an alternative recount of the city’s history. 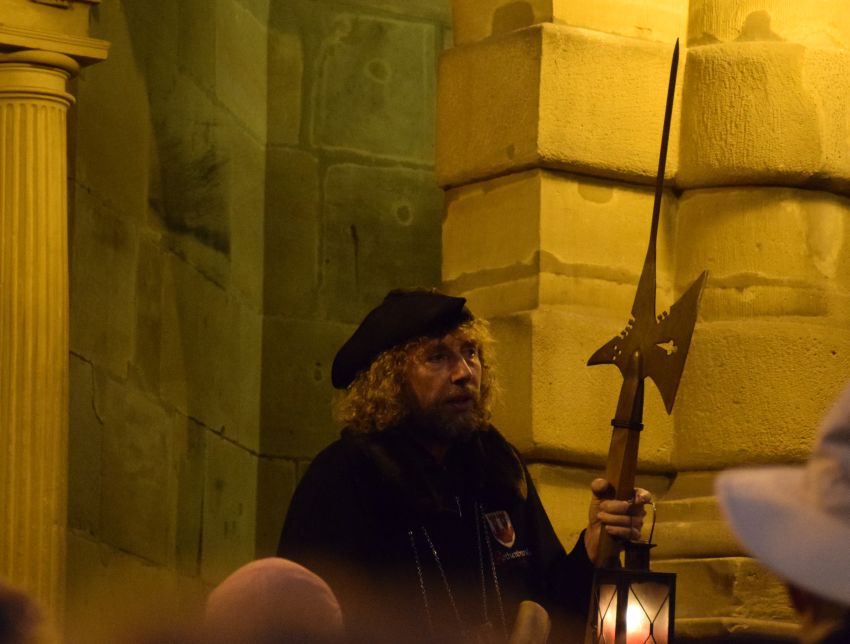 Accompanied by about 100 Americans meant it wasn’t exactly the low-key, intimate excursion through the night streets I’d expected.  However it was very entertaining and surprisingly informative. The city had some history – resisting invasion for 600 years, narrowly avoiding being razed to the ground in the 2nd world war due to the mum of a senior US military guy having fallen in live with the town 20 years earlier. 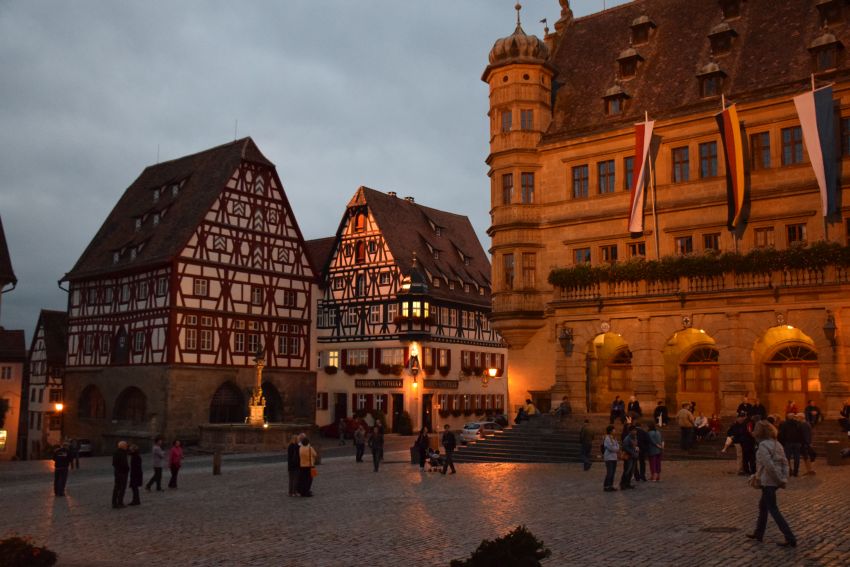 The following morning both Abbie and I woke well before dawn (about 5am) so we rugged up, grabbed a torch each and went out on the first of what we now call our ‘midnight adventuring’. We explored the completely deserted town, along the walls, down in the deep dungeons and had a scary but exciting time with the city all to ourselves 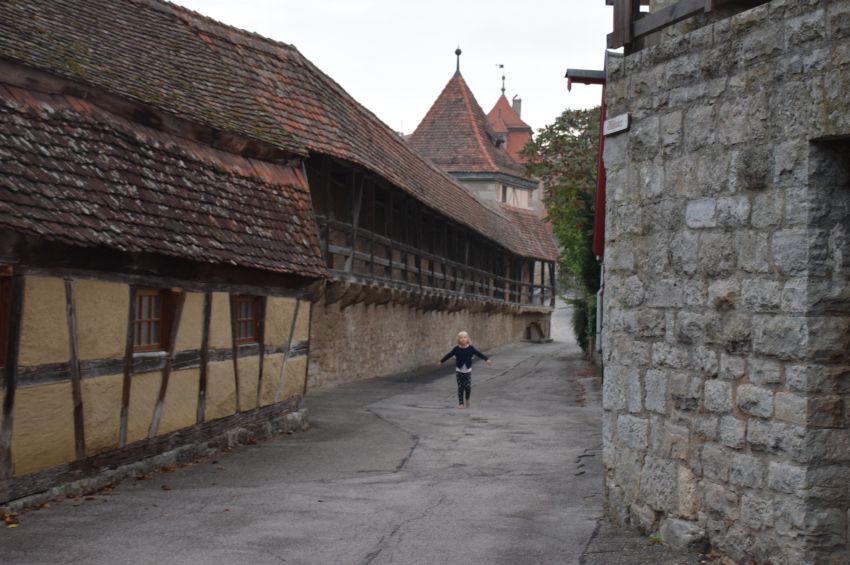 The next day, after some rollerblading around the carpark, we all ventured in and had a look round the city which is truly spectacular despite the hordes of tourists. We wandered around the walls and climbed the bell tower and checked out some of the old half-timbered buildings including an old pub (called ‘Hell’ for some reason) which dates back to 900AD! 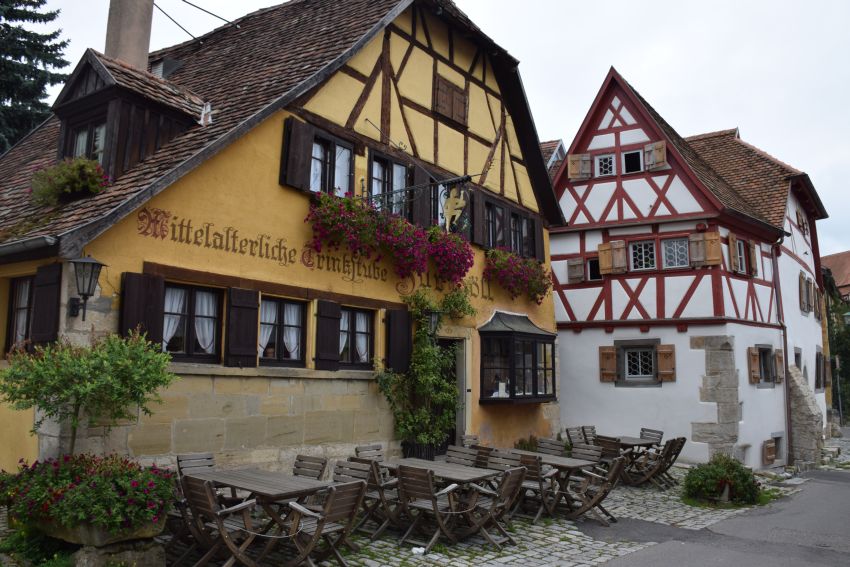 After some morning tea, Chelle and the kids headed back while I had a quick look in the criminal history museum. It held a fascinating selection of ancient implements used to help keep the peace in the old days. It had an original iron maiden and plenty of other gruesome and original torture devices. 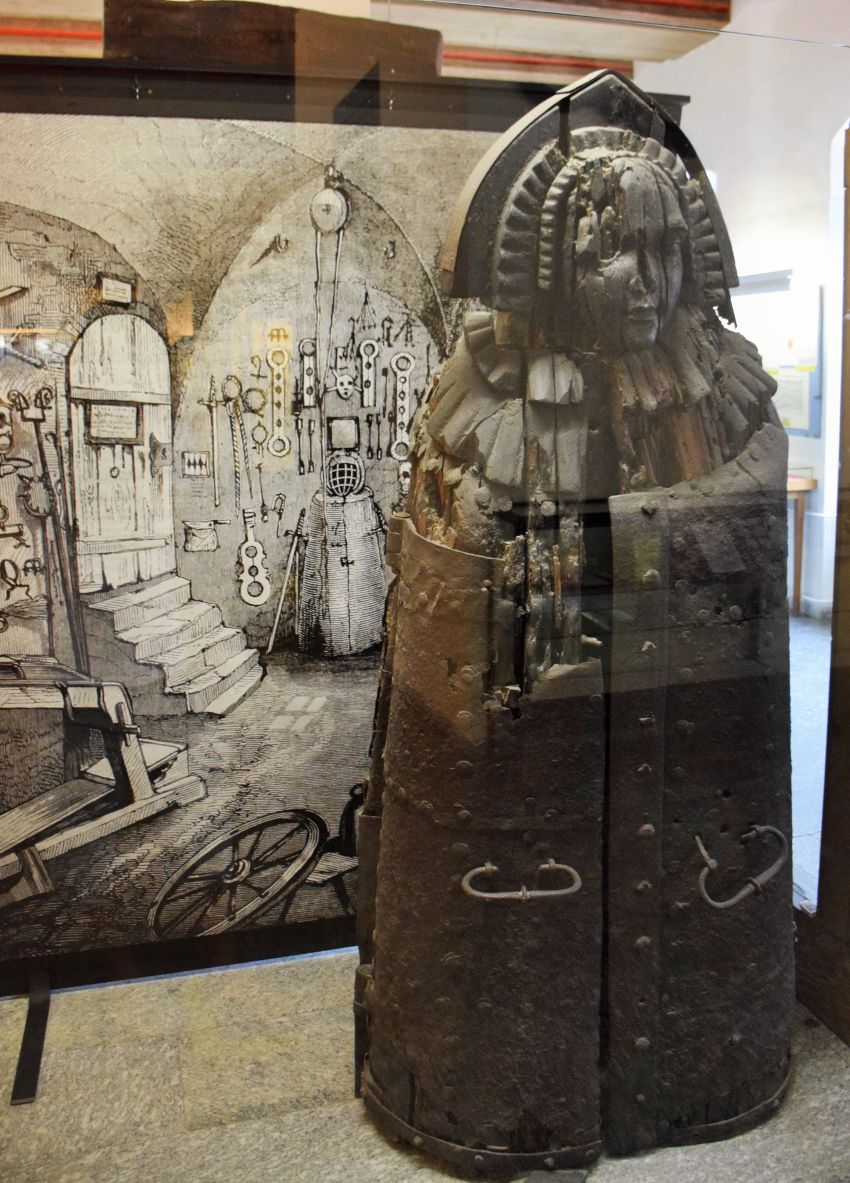 Some things were on a bit of a lighter note such as the ‘neck violin’ which forced ‘quarrelling women’ together until they could sort their differences, the dunking stool, exclusively for the baker if he baked his loaves too small and the shame masks which were for anything from being too nosy, too drunk or playing music badly. The good old days… 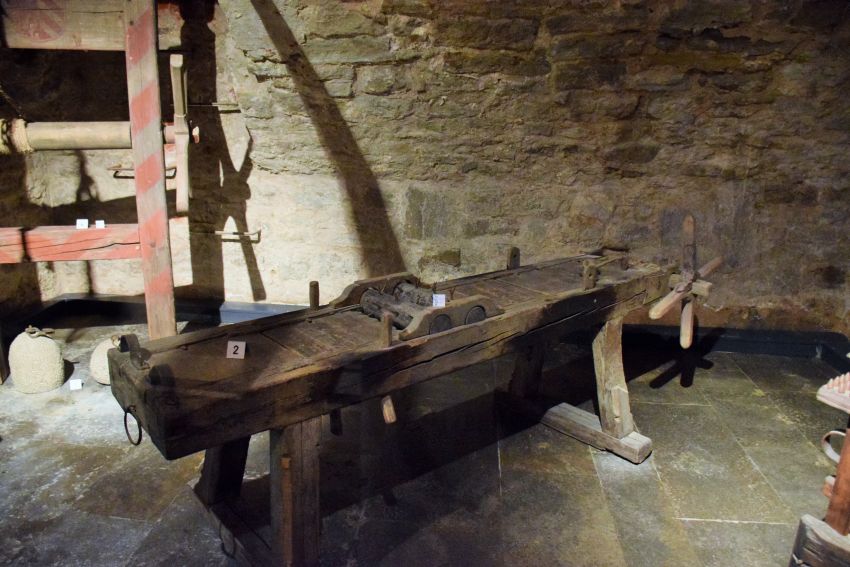 Want to be a bit taller?

We hit the road again following the Romantic Road passing some more lovely old towns until we came to Dinkelsbuhl where we decided to stay the night (for free in a carpark just outside the walls). Again, it was a charming old walled town with I think about a dozen impressive towers around the perimeter. 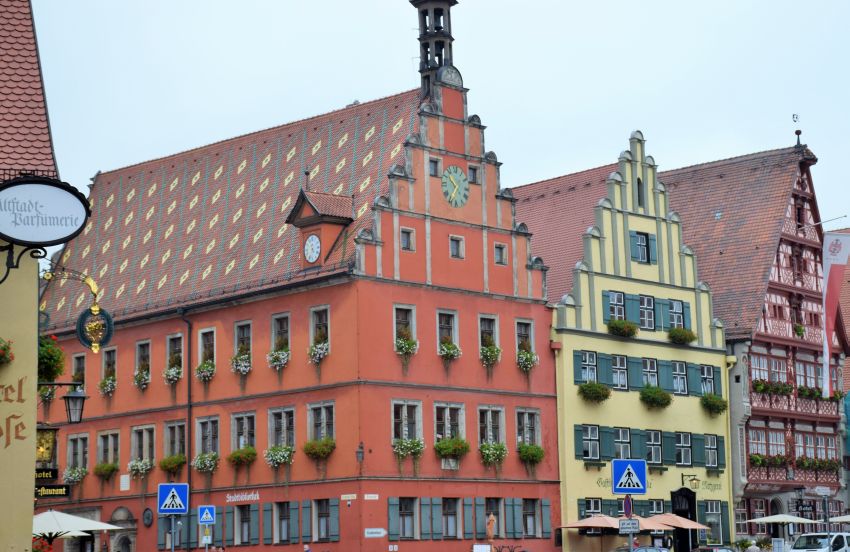 We took the chance to catch up of a few things – the kids and I had a haircut, we found a well-priced Dirndl for Abbie, a lederhosen for James and sorted out a minor problem with Frosty at the local Mercedes dealer.

Next it was on to Augsburg, one of the last destinations on the tourist route. However, by now, we were a bit over beautiful medieval towns and knew that none would surpass Rothenburg so we just stopped over at a stellplatz a little out of town. It was good for a jog along the river and we also enjoyed meeting Chris and Ray from the UK who are serious motorhomers (see their blog www.roundabouteuropeinamotorhome.co.uk) and has been following the same route (in fact they’d spotted the kids on their rollerblades a few days ago in Rothenburg).

The grand finale of this little route is the famous Neuschwanstein Castle near Fussen in Bavaria. It was mad busy with tourists and the jostling and queueing took the shine off the visit somewhat but it’s still an incredible building and well worth the visit and tour inside. Congratulations mad King Ludwig II on pulling off such a feat! 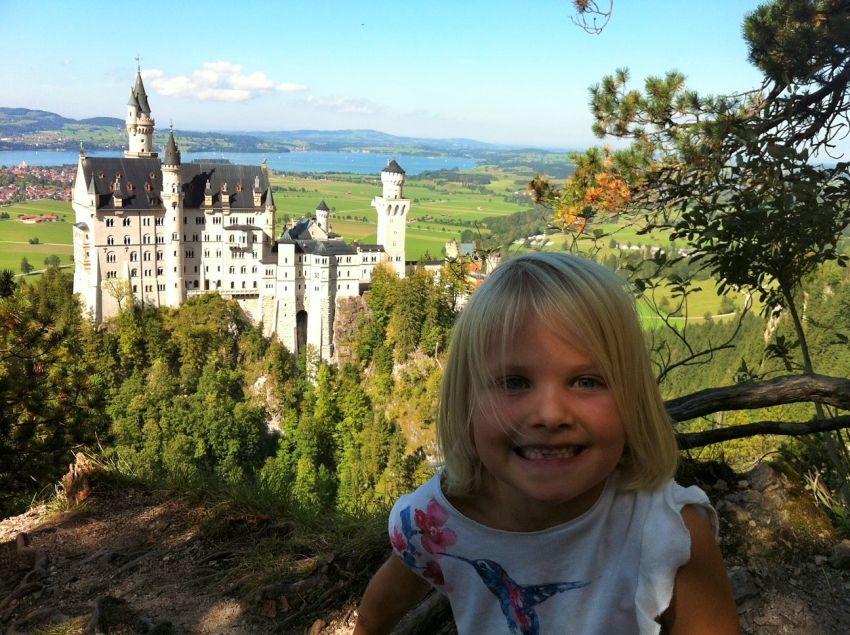 Can’t remember where we stayed that night but the next day we crossed the border to Austria and enjoyed a very scenic drive in the sunshine (a nice change from our last Austrian visit when we were plagued by rain) and found a quiet little carpark to spend the night near a lake. Next morning, Abbie and I were up early again for more adventuring and set off into the freezing dark to check out the lake. There was a low-hanging fog bank that we walked through, after which the moon and stars lit our way as the horizon slowly brightened. Another exciting although chilly adventure. 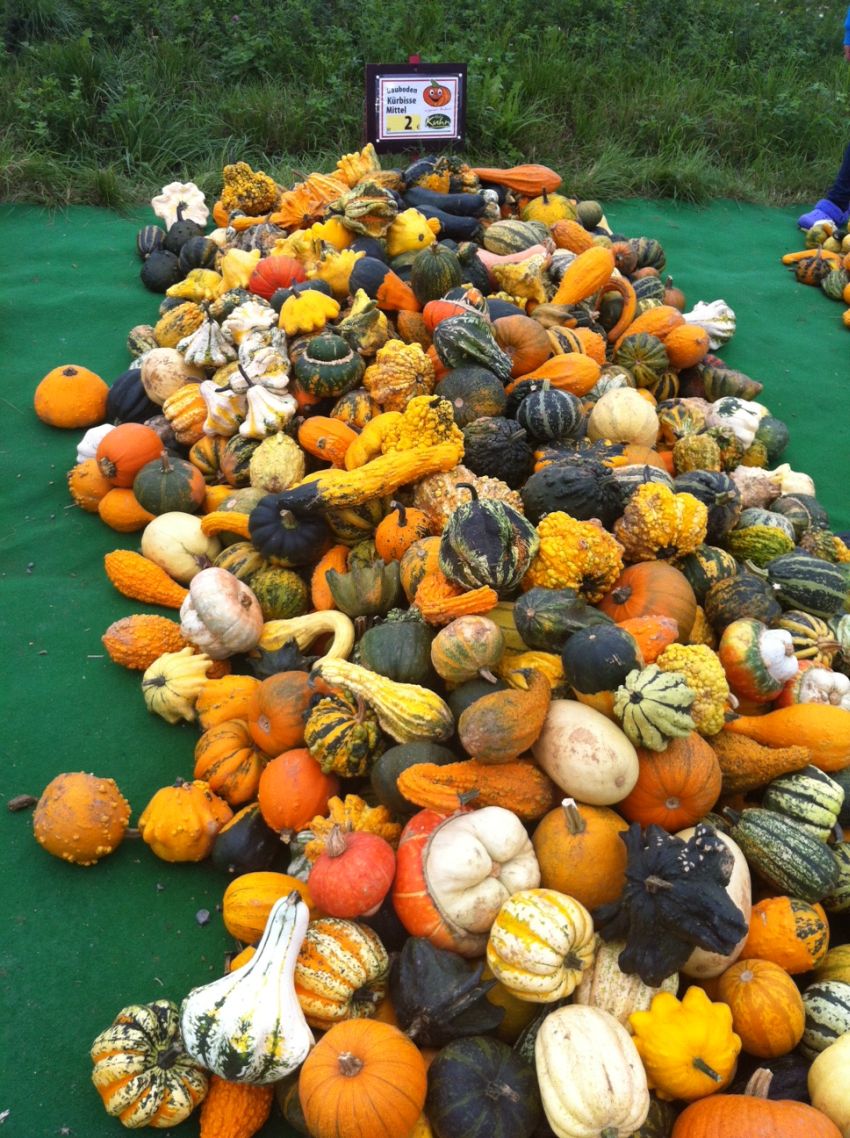 Some pumpkins for sale along the way

Next up was Innsbruck, a city we’d kinda passed by last time. This time we parked in the city and set off into the centre to check things out. Really beautiful city with the surrounding mountains as a backdrop over the buildings. We found and climbed another bell tower to be rewarded with a 360 view of the city. Done a lot of bell towers on this trip and they are always well worth the euro or two, not just for the view but also the spiralling stairs which get tighter and tighter and steeper and steeper as you near the top! Heaps of fun! 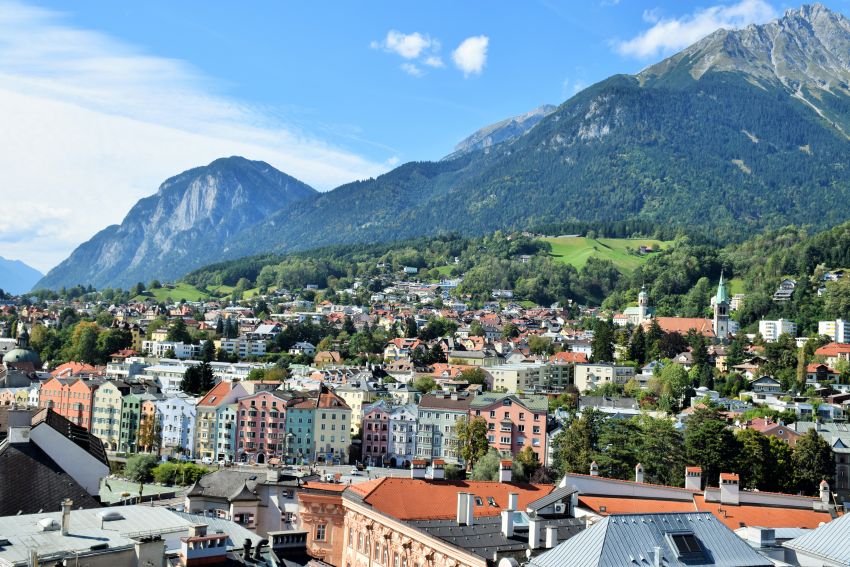 We treated ourselves to lunch out and then set off for C & A where we’d heard there was a chance for a cheap lederhosen for me. We got lucky and before I knew it, I was kitted out too for our upcoming cultural visit.

So we set the sat nav for Munich and followed the minor roads looking for a place to stay. Took quite a while but eventually we found a super-quiet remote spot in the middle of the woods. 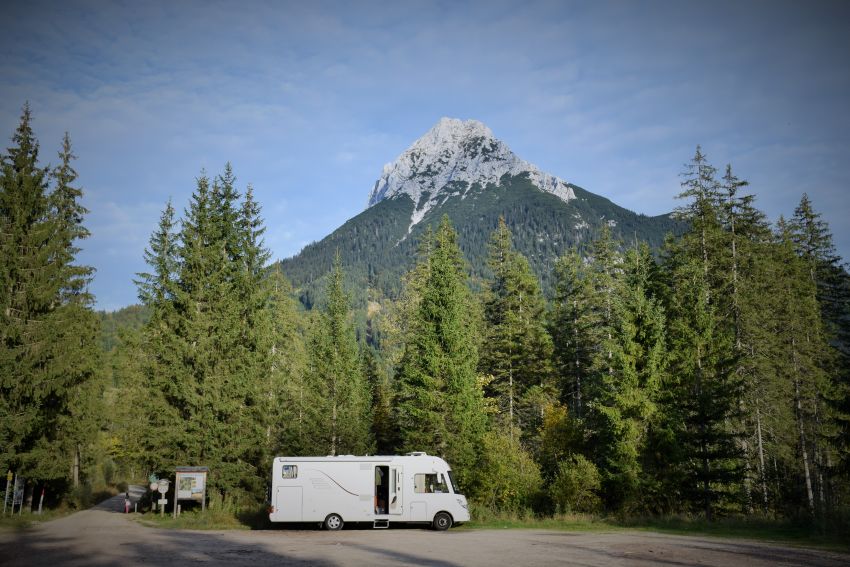 A river ran by and we decided to get a fire going on the banks knowing that there was no one for miles around to catch us! 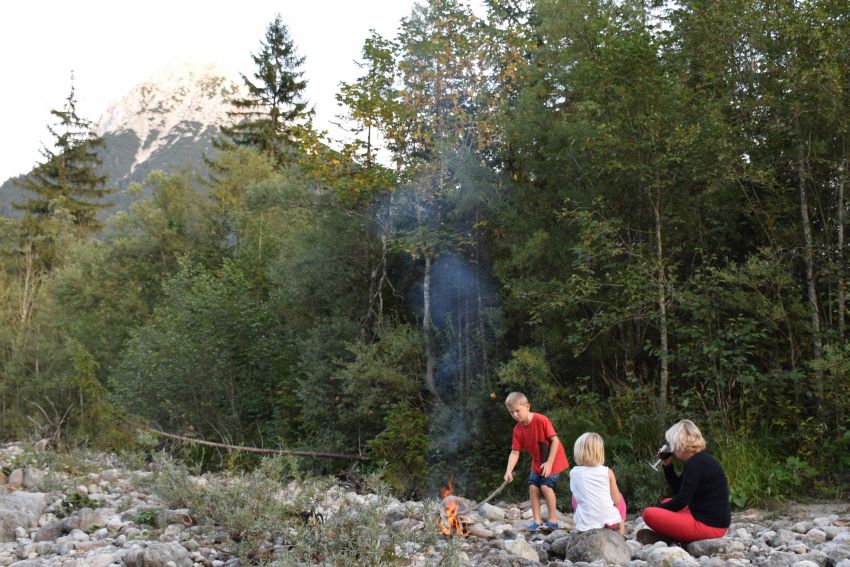 So that was a nice country interlude before we hit up the big smoke – Munchen!