We farewelled the gorgeous Sant’Angelo le Fratte and headed towards Matera. As we were going in a more easterly direction, I expected less activity, but what a buzzing town it was! Despite the rain and lots of it, we had a lovely time here. Matera lies in a small canyon and is well known for its historical centre consisting of ancient dwellings carved into the cliff called Sassi and it has been a UNESCO site since 1993. This town has also just been declared the Italian host of the European capital of culture for 2019. ( so make sure you check it out before then, when the amount of tourists visiting will be crazy!) 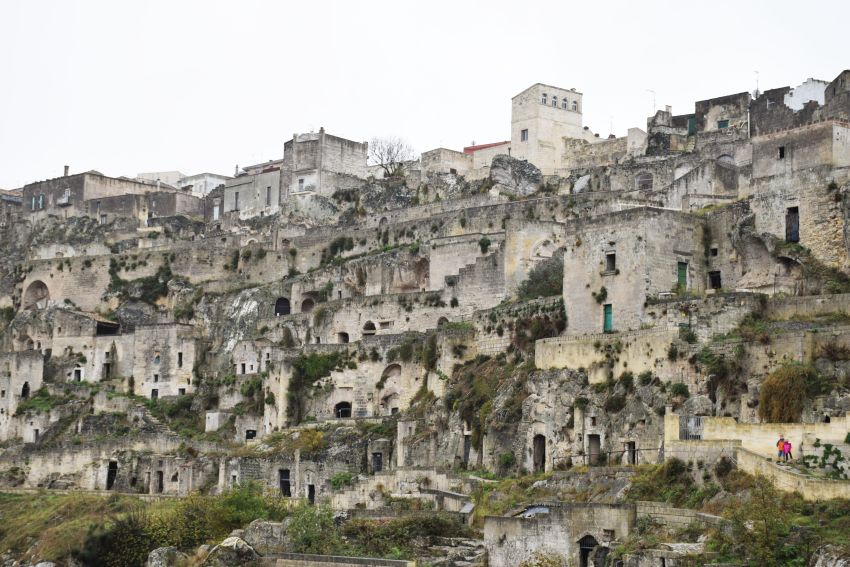 We treated ourselves to an early dinner at a restaurant, enjoying masses of antipasti, mozzarella and pasta. Thanks to Dave’s earlier exploring, I was then able to do a pump class at the local gym, which despite being the same Les Mills format, certainly had an italian twist. This included the language of course, and very interesting people joining the class, whether to participate or just to watch the rest of us! Next day was more torrential rain, which hampered our movements a bit. I was able to enjoy a bit of retail therapy while Dave and the kids braved the weather to check out the sassi. 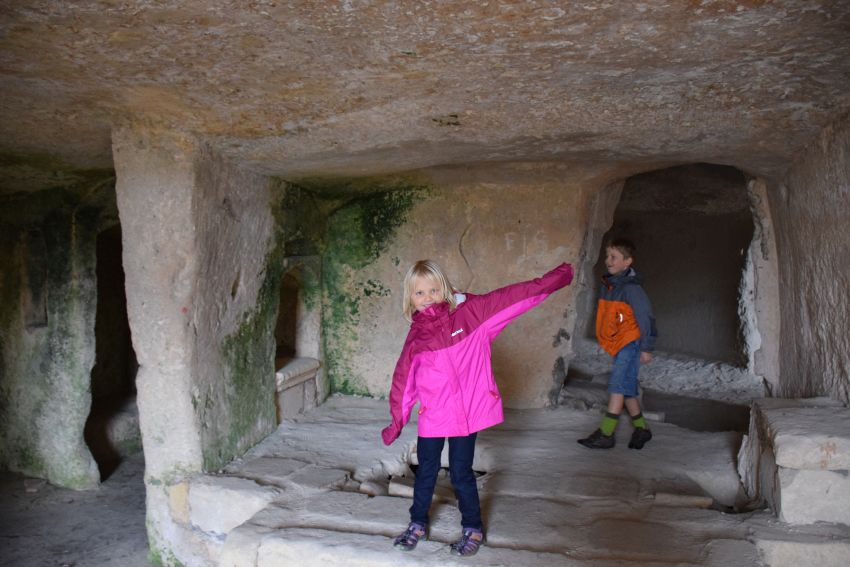 Then we moved on back towards the west coast, via a ghost town called Craco A very eery place, which even had Dave a bit freaked. Apart from one lonely car, there was no other sign of life. Only broken windows, cracked walls and faded, ripped signs. Turns out that this place has been abandoned since 1962, due it being deemed uninhabitable because of earthquakes and landslides. Worth a visit, although don’t expect to be buying any souvenirs! 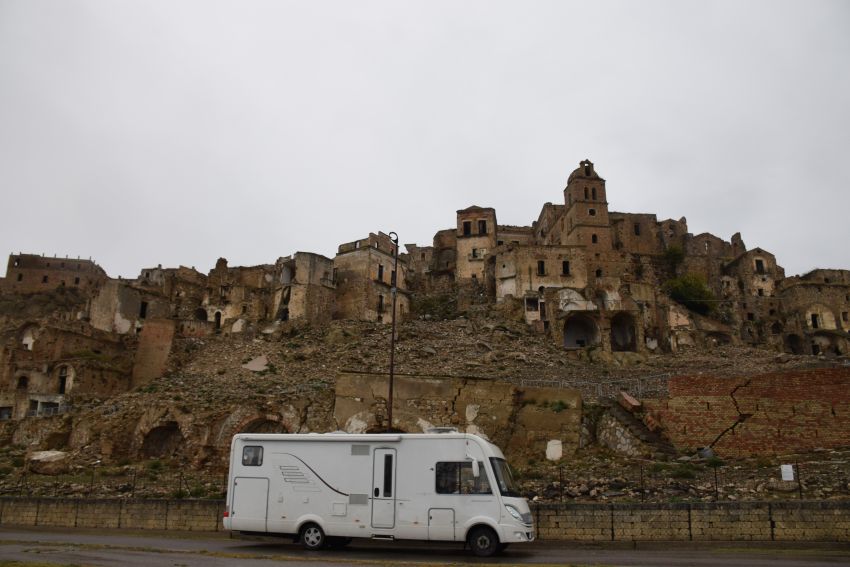 Stayed this night in a strange place called Rocca Imperiale, right on the beach. More rain meant that there was no way that I was going outside and so don’t have much to report here. Dave still managed a run and the kids did some beach combing whilst I relished in engrossing myself in my book for an hour. All the while we were very grateful that we had made our decision to skip the Amalfi coast!

Our last stop on the mainland of Italy was called Palmi, right on the coast , which would have been a great find, were it not for the massive piles of rubbish everywhere. I have never seen so much rubbish , which along with the stench, detracted from its beauty. We quickly made ourselves known to the general public, who as usual stared at us as if we were aliens as we purchased from the local shops and went for our morning jogs. It was a hive of activity the next morning with old ladies selling fish ( at great expense), groups of men standing about, older men playing cards on the beach and kids on rollerblades. As usual, not too many women around, I must say. 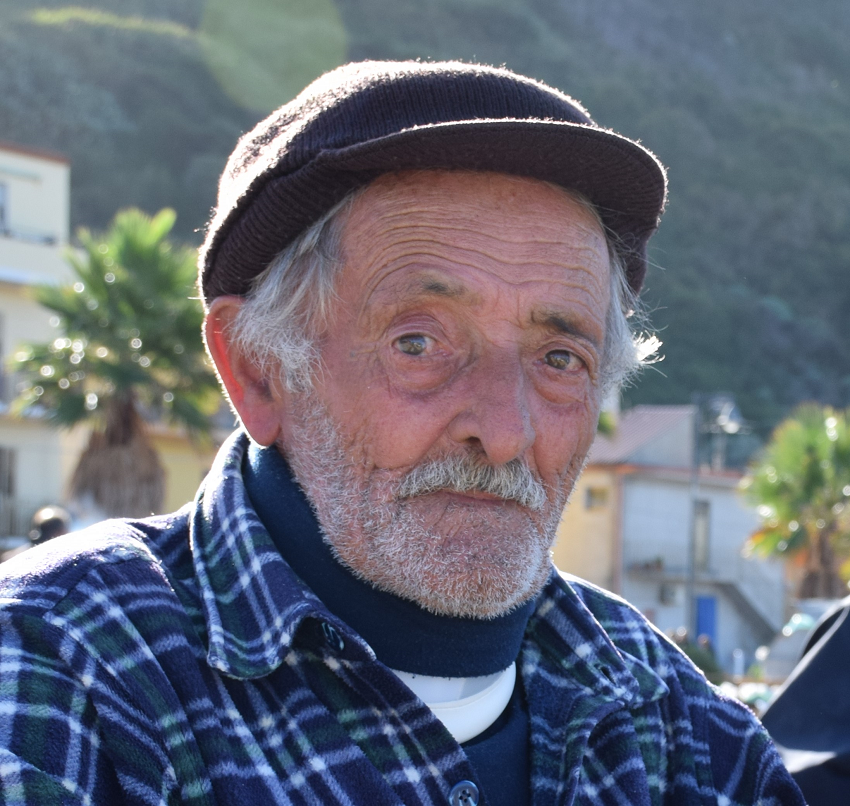 Sicily bound today and an exciting prospect. Frosty easily boarded the ferry for the 20 minute crossing to the port town of Milazzo. We drove to a secure parking spot for Frosty ( and Dizzy ) as we were planning a night away to Stromboli the next day. We had a pleasant stroll around Milazzo which is actually a lovely little place, despite being a port town. The next day we had an early start for the ferry to Stromboli. A 3 hour trip across, stopping at the other Iolie islands including Lipari and Vulcano. With such an early start and no coffee available on board, Dave took the opportunity at Lipari to jump out to buy some drinks, only to discover on his return that the boat had started its departure. Panicking, he shouted ‘ ma familigia, ma familigia!’ pointing to the boat, at which point the boat came back to get him! Another reason why it has been extremely useful to have a stock of keyring koalas and kangaroos handy! The captain even came down to say Grazie! ( Phew!) 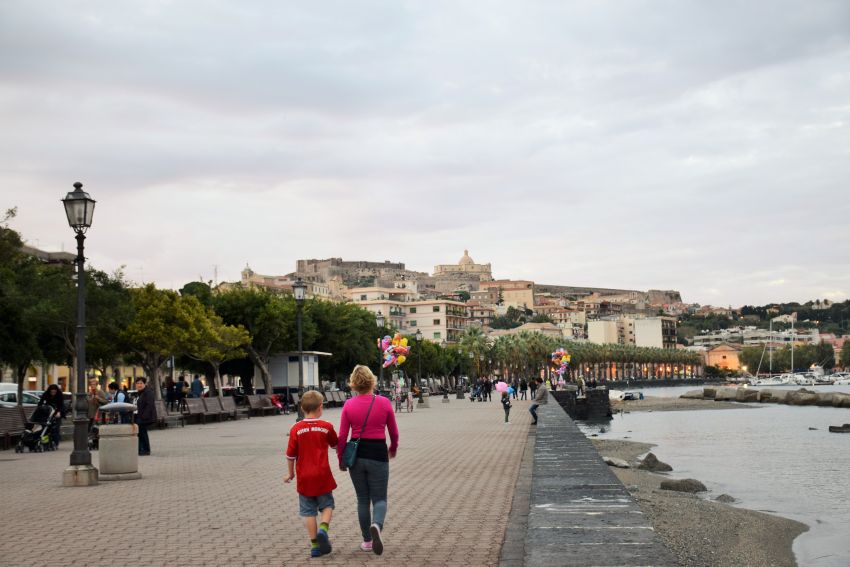 Before arriving at Stromboli, Dave met a delightful French couple on board, Mélanie and Florian from Grenoble, with whom we ended up spending the next 48 hours. Like us, they were planning to find some accommodation on arrival and climb the volcano. First things first for all of us upon disembarking was coffee, followed by accommodation, lunch and then the ascent of Stromboli. Unfortunately, due to too many recent explosions, guided tours to the summit ( 900 metres) were cancelled. In fact, there was a 500 euro fine for anybody caught climbing past the 400m mark. So we headed off towards our destination, only to discover that we were in fact going the wrong way and had to turn around and come back. Panic was setting in as it was getting dark and we wanted to reach the viewing platform by dusk, so we quite quickly ascended to the platform in time, where we were joined by Mélanie and Florian. After a very warm day, we were suddenly freezing and had to put on all our layers. Very windy too and even a little bit scary, waiting in the dark for the volcano to show us its stuff. Unfortunately, in the end, a rather lacklustre event as the volcano didn’t really perform well at all and therefore ,no photos. So down the 4 of us headed at a rather fast pace following our French friends to apéro and dinner ( at the same place where we had lunch as it seemed to be the only place open on the island). 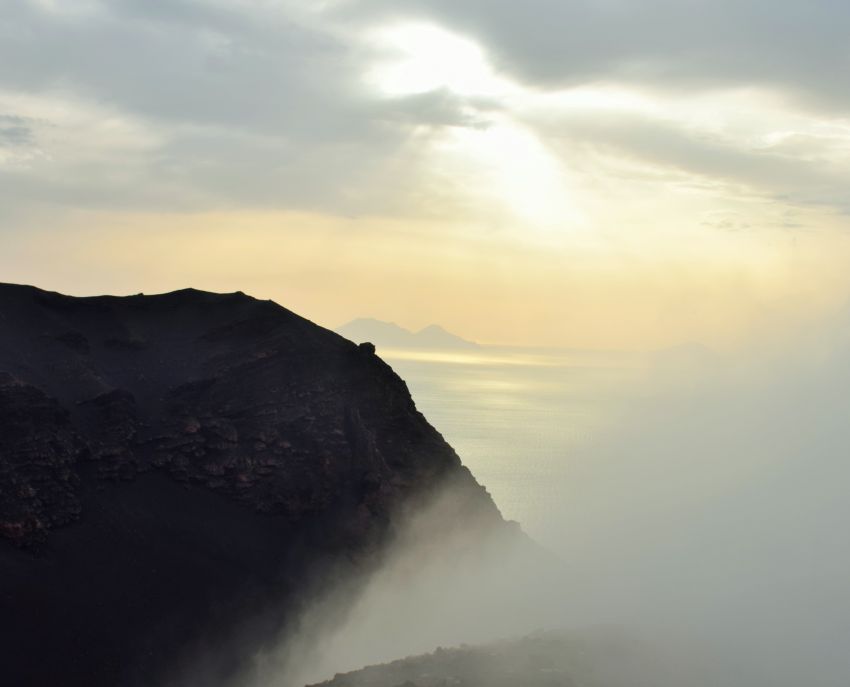 The next morning, we packed up to leave the island, only to shortly thereafter discover that due to high seas, all ferries off the island had been cancelled indefinitely! So, trapped for at least the next 24 hours, the 6 of us returned to our accommodation, via the butcher, the fruit market and the pasticceria to gather food for lunch and dinner. Turned out to be a fantastic misfortune, as the kids and I chilled out for the day, whilst Dave, Mélanie and Florian were rebellious in a climb to the top of Stromboli, and with greater photographical success. 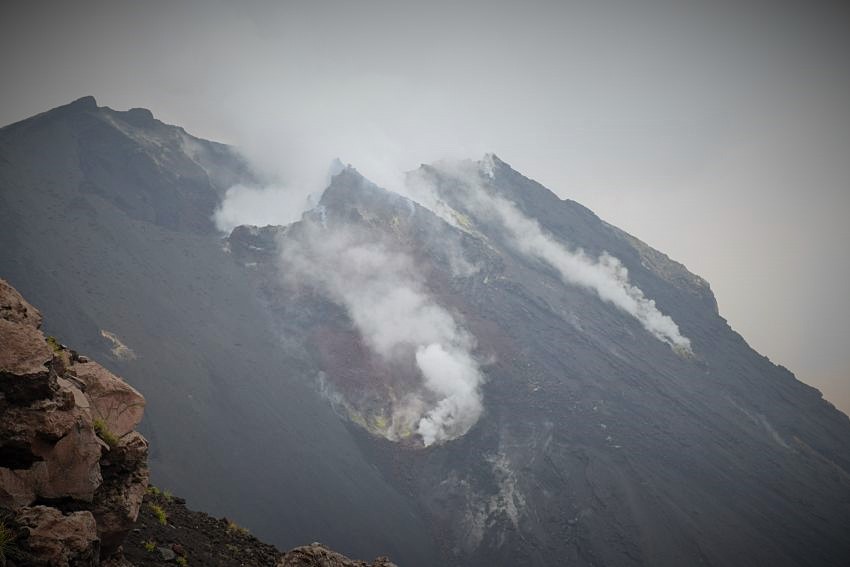 And wow, to top off the day, more apéros, roast chicken, potato dauphinoise and grean beans. Une soirée fabuleuse with great conversation. Looking forward to seeing them again! (and to making Poatato dauphinoise at home). 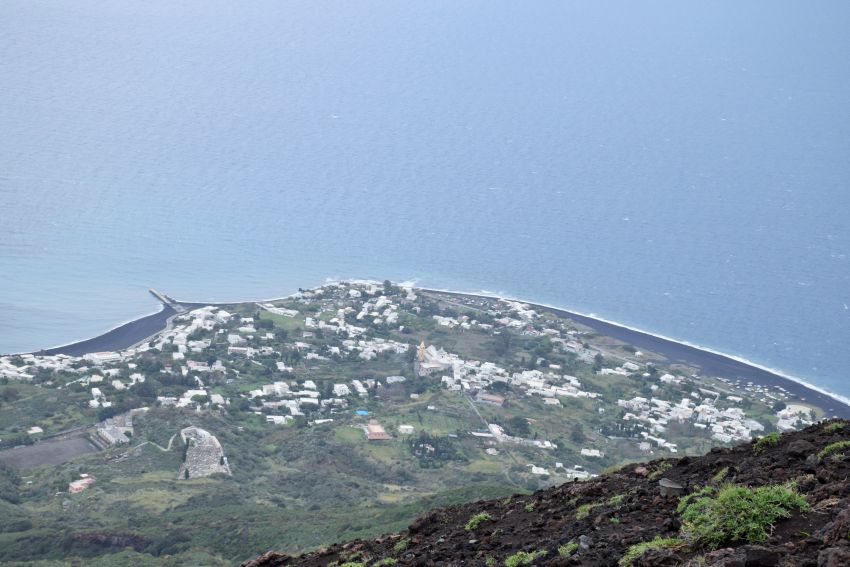 view of Stromboli from the very top 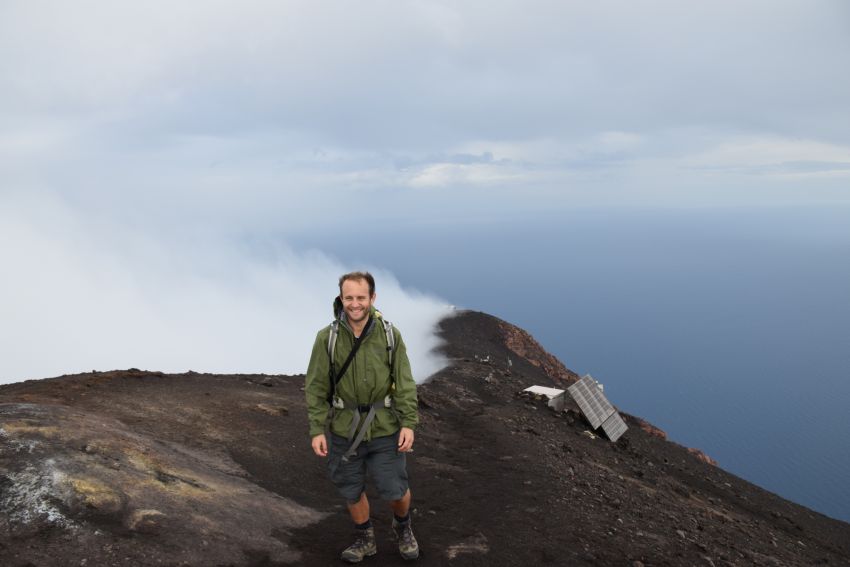 Dave at the summit of Stromboli

Early out (5.30am rise) to board the ship at 7.30am back to Milazzo, and it was like we were saying Goodbye to so many familiar faces. After days and nights there, we practically recognised everybody on the island! Such an enjoyable few days.

Taormina was the next stop, with a walk in the drizzle, up a climb ( of course) to check out the beautiful view. Chanced upon a sweet little chiesa, built into rock. The kids lit their candles and we then ventured down a cactus-lined stairway back to Frosty. Via a local butcher for meat kebabs. Still not sure what all of the meats were .?! 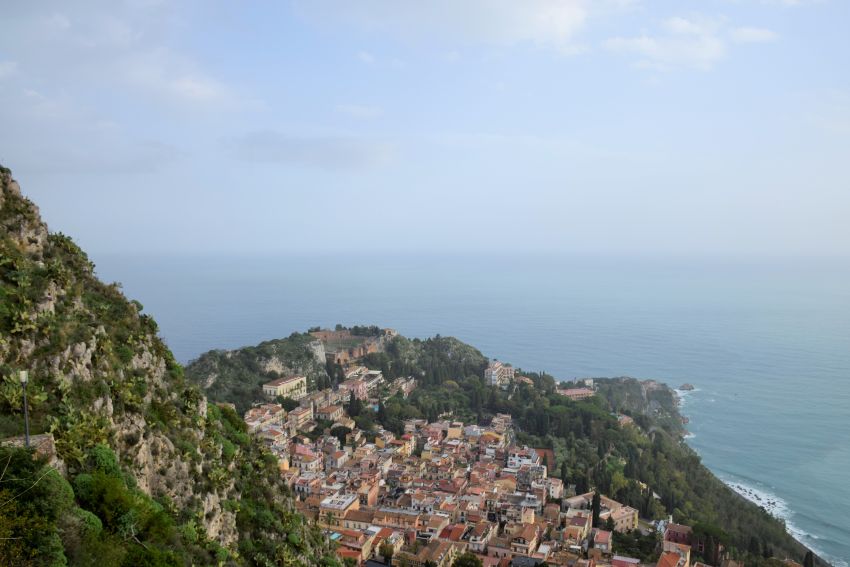 Further on a way, we stopped at a busy little campsite in Catania, with 3 other vans also staying, from Holland, the UK, and a Thai and Norwegian middle-aged nudist couple! There were also loads of cats, ( much to Abbie’s delight) one of whom very comfortably took up residence in our van. Amazing water views! It has as to be said though, the WORST showers! 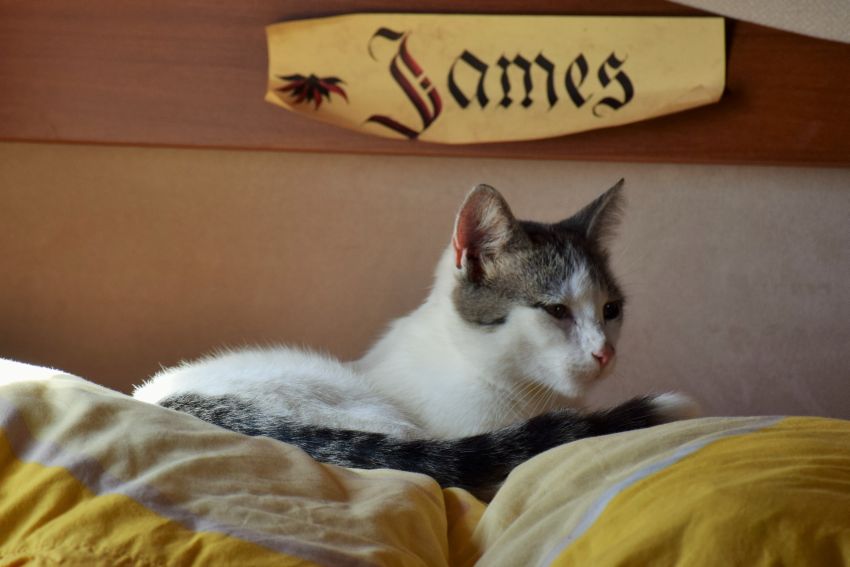 The weather didn’t look too crash hot, though we still went to check out Etna, which was a windy road up to the top, with a steep decline in temperature. ( from 20 deg to 6). Had the usual disagreement with James about putting on something warm, to which he completely defied. Soon enough we were at the top of the crater and it was bitterly cold! The kids and I hotfooted it into the nearest café for the most delicious hot chocolate ever, while Dave decided to brave Etna. Sure enough, within about 5 minutes, it started torrentially pouring and meant a very wet Dave about 20 minutes later! 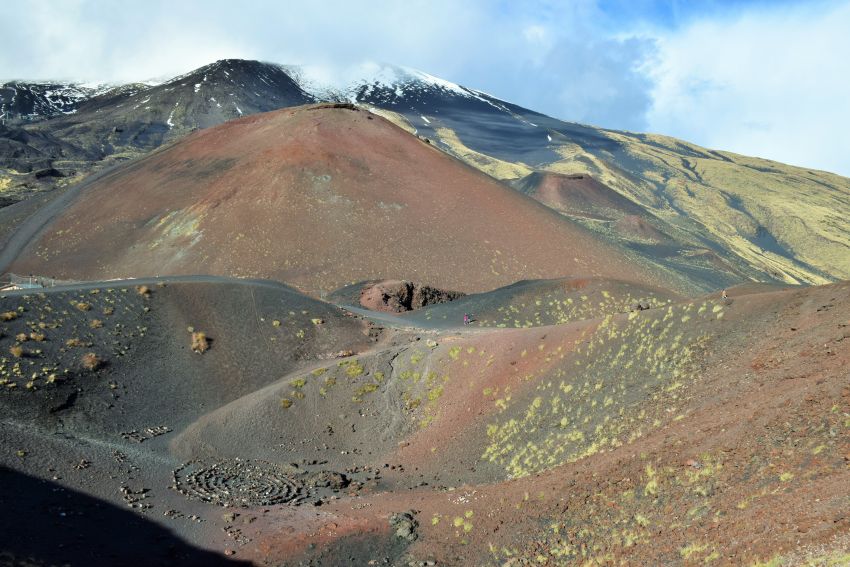 a crater at Mount Etna

Drove west to a charming little village called Valguarnera, started off rather stressfully as we found ourselves too wide for the main road of the bustling village. We swiped out a wing mirror along the way and were then approached by the impeccably attired policewoman smoking a cigarette( complete with the typical white leather satchel, worn by all Italian polizia) who told us that we couldn’t be here in a camper. With an audience of hundreds, gobsmacked by us being there, we were very helpfully directed down the street by a bunch of delightful boys, aged about 11/12. Never been so impressed with boys of that age; polite, respectful, friendly, not to mention the handshakes and greetings as we made our way down the street. We thanked them with our usual offering of keyring koalas and they were delighted. They even offered to direct us further! We chanced upon the boys again shortly afterwards and they came running over with sweets for the kids and us! Anyway, suffice to say, we again made ourselves very well-known, purely because we were obviously so different in their eyes.

Continuing towards Palermo, we endured some of the most stressful roads on the trip. Stuck at the top of a one way hill, with a line of cars behind us, and realising that the road was potentially too narrow to drive through! Not being the driver, I must admit that I was fairly cool about the situation at the time but Dave was just a tad nervous! Heureusement the crisis was averted. 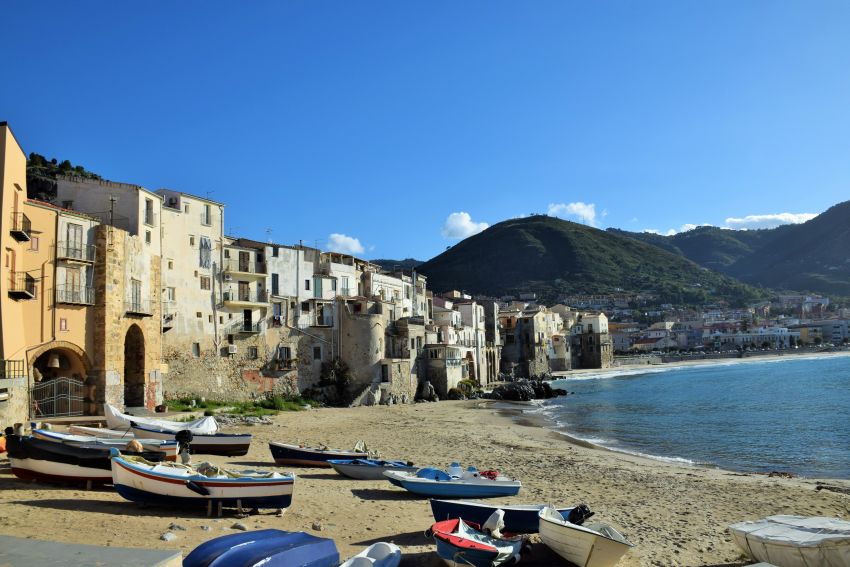 Cefalu, on the way to Palermo

We stopped for the night in a seaside area called Trabia,right next to the sea and also a pizza joint. Would have been rude for us not to dine there, and in the end I think that we were the only ones. Quick jog for Dave and I next morning before adding another 14,000 steps around Palermo ( + jog = 20km day!). 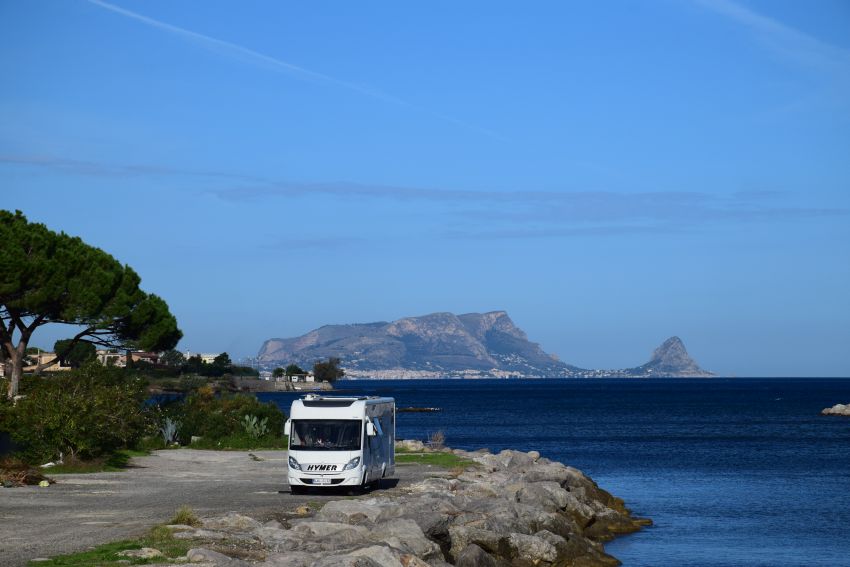 The day included visiting the two local markets, one selling the famous spleen sandwich, which had to be tried by Dave! Vomit! Lunch at the bigger of the two markets and a rest in the park, before getting ourselves upon overnight ferry to Sardignia. 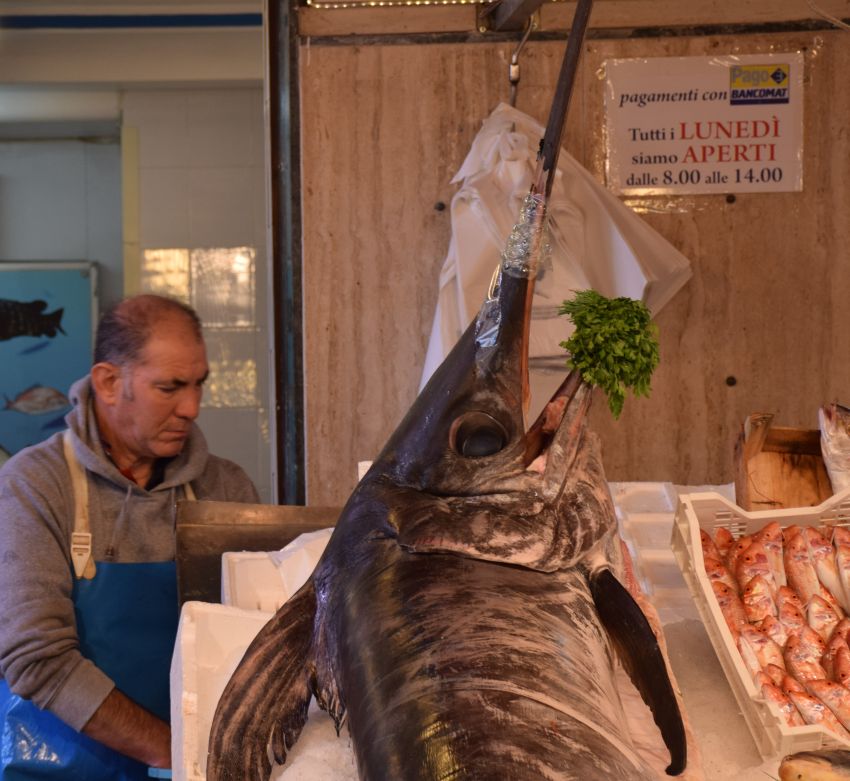 an enormous swordfish at the markets

3 Responses to Matera to Sicily