After meeting up with Craig, we took Chelle to the airport and dropped her off to catch her plane to Amsterdam where she was meeting up with Jen for a few days so it meant I was on my own for the kids while we traveled a few hundred kms to Zurich where we would pick her up in a few days.

Being late in the day and needing washing done we headed to a local (again very unfriendly) campsite near a lake before moving on early the next day.  By chance the site was near Andechs Monastery which dates back a cool 1,000 years but more importantly has a famous brewery attached which has been churning out beer continuously since 1455!  Unfortunately the brewery was closed but a wander around the grounds & trip up the belltower made it well worth the stop.  Happily in the church shop amongst the Virgin Mary’s and crucifixes also managed to find a few bottles of beer to take home. 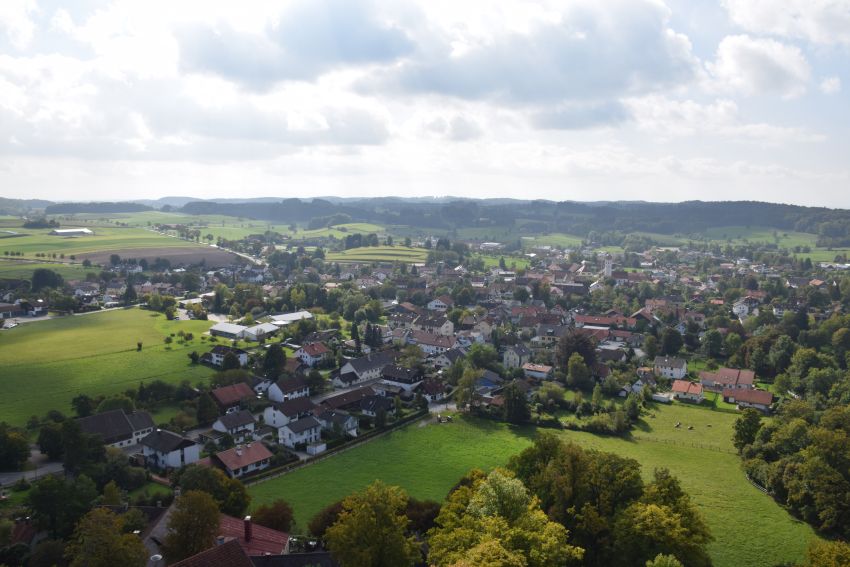 Seems we were very much in the castle area of Germany so we headed west to Lichenstein castle (not to be confused with the country) – a small but beautiful castle that even ‘out-fairytaled’ Neuschwanstein (helpful that there were next to no tourists there too).  We ended up staying the night in the carpark – by 7pm it was getting dark and we had the whole hills & castle to ourselves. 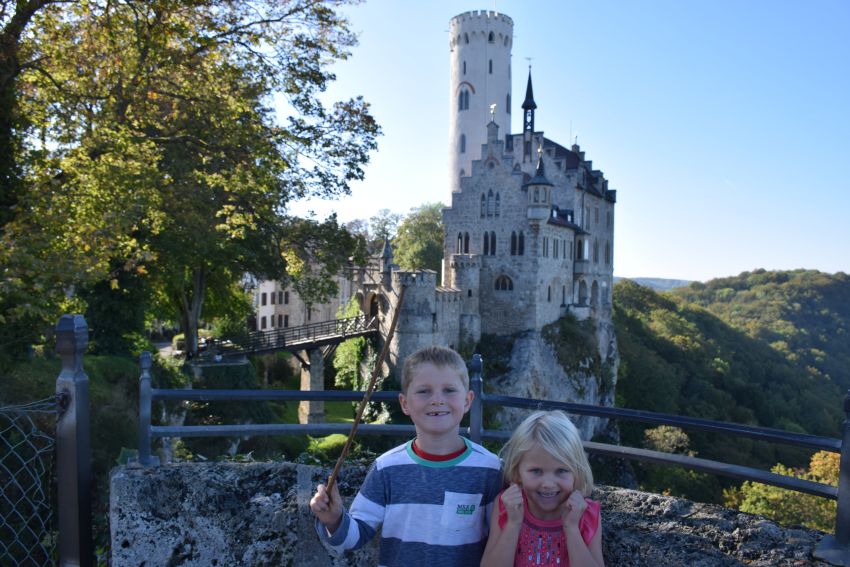 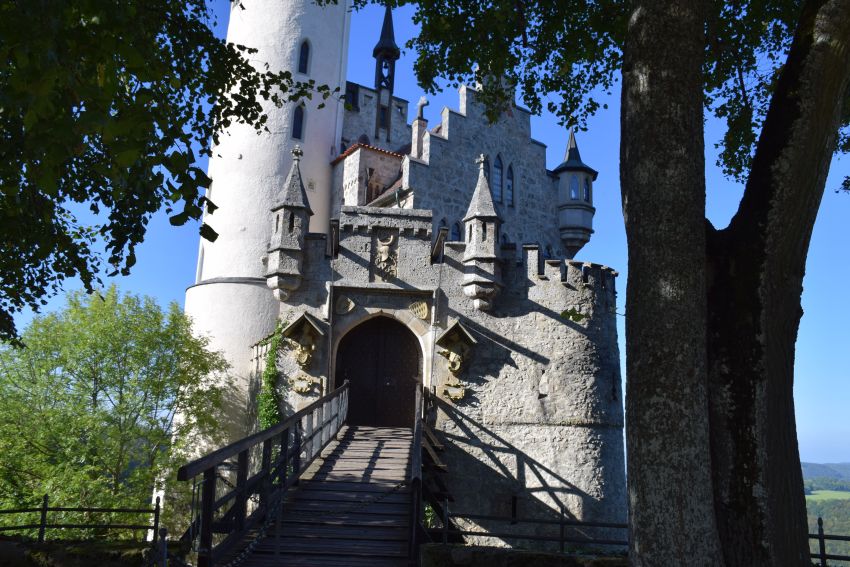 Up early the next day, we decided to hit up one of the caves that we’d noticed on various signposts.   Tours are boring so we found one that had no tour.  You pay the money and they let you in the top to explore a few kms of caves on your own.  Great way to do it and, having come prepared with torches we even managed some off piste exploration! 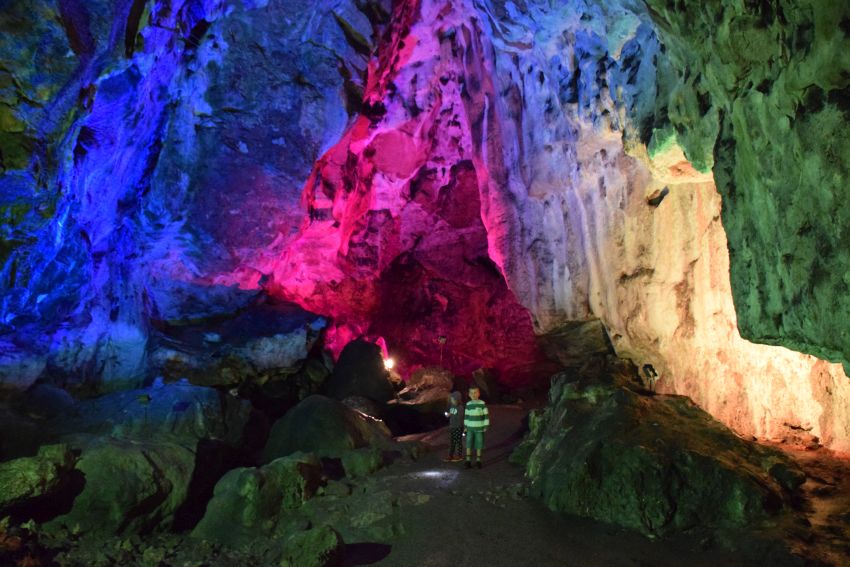 Chelle had kindly nicked off during school hols so with no schoolwork to do, it was time for more action!  So we drove 10 minutes to the ‘Bobbahn’ a summer ‘bobsleigh’ route where they were somewhat surprised to see us and cranked up the lifts to get us to the top where we enjoyed 4 exhilarating runs down.

More castles beckoned so we headed to Hohenzollern Castle a 2 hour drive away and on the way to Zurich.  Weather was iffy but we had a good nose around.  Again, we stayed in the carpark and again, everybody else had cleared off by dark leaving us all alone. 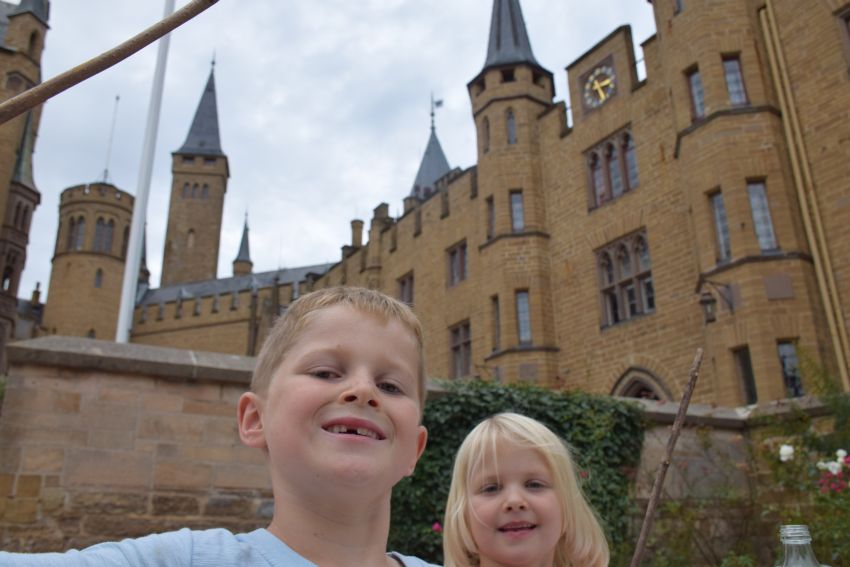 We took the chance to go ‘Midnight Adventuring #3’ and James proved his worth leading us up the long path to the castle by torchlight while we tried not to be too scared. 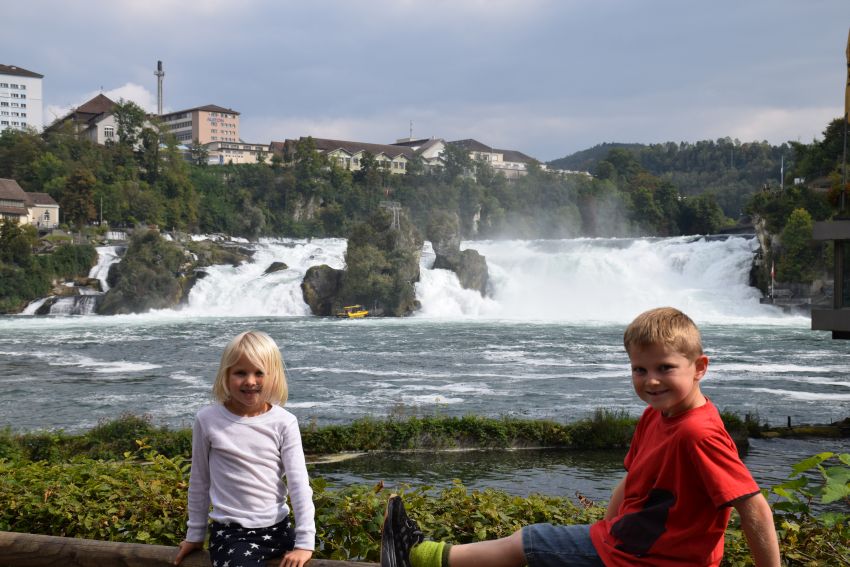 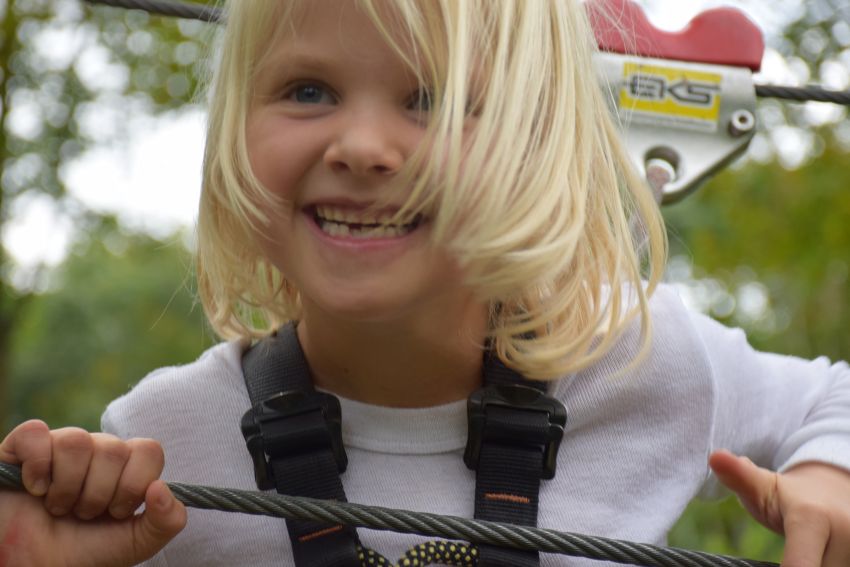 After the park, we drove for an hour or so to the airport to pick Chelle up.  Despite a few hiccups (eg near miss driving down a 1-way street into an underground carpark with 2.2m clearance (we are 3.15m)) we rescued her and whisked her away.  All had gone well and most importantly, she’d successfully escaped any customs scrutiny so deportation was avoided! 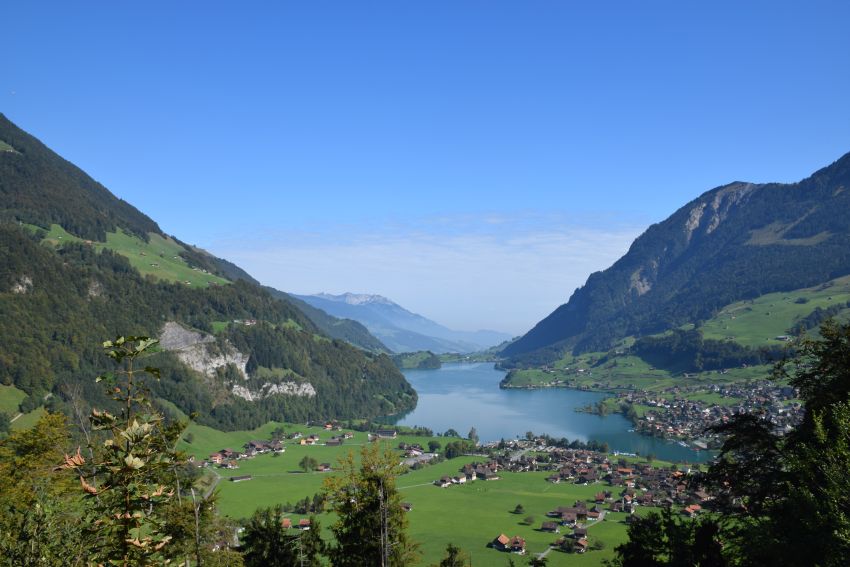 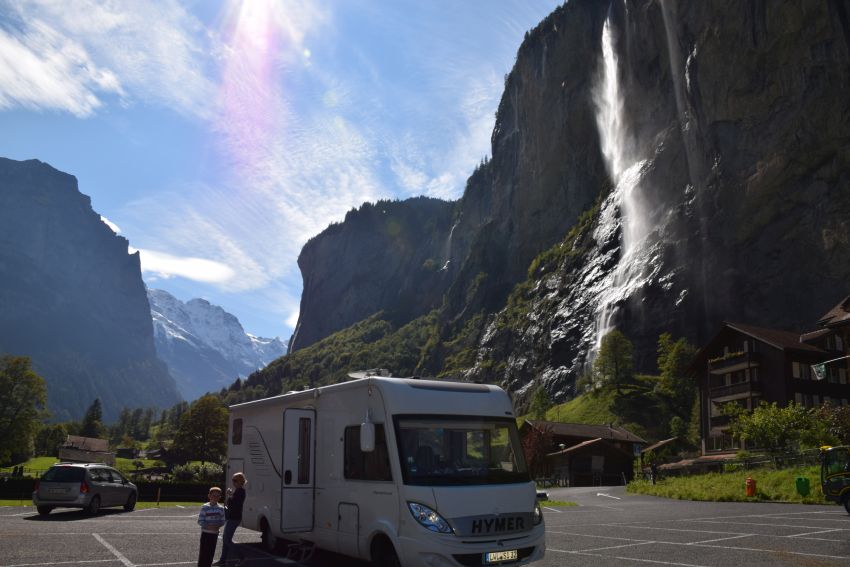 Switzerland came to the party and delivered us great weather especially compared to our last visit.  We headed for the heart of the alps where we’d arranged a final Post Restante schoolwork pickup.  I’d ignorantly picked a town’s GPO almost randomly and it turned out it was a car-free village only accessible by train/walking.  Nevertheless, we got the train up and returned with 2 x 12 weeks worth of schoolwork plus a 5th hairdryer for Chelle (long story).

Making the most of the weather, next day we took the Junfraujoch train up the mountain.  This is not a typical train – completed in 1912, it’s Europe’s highest cog railway and, by burrowing through the centre of the Eiger and Monch, takes you to nearly 3,500m altitude. 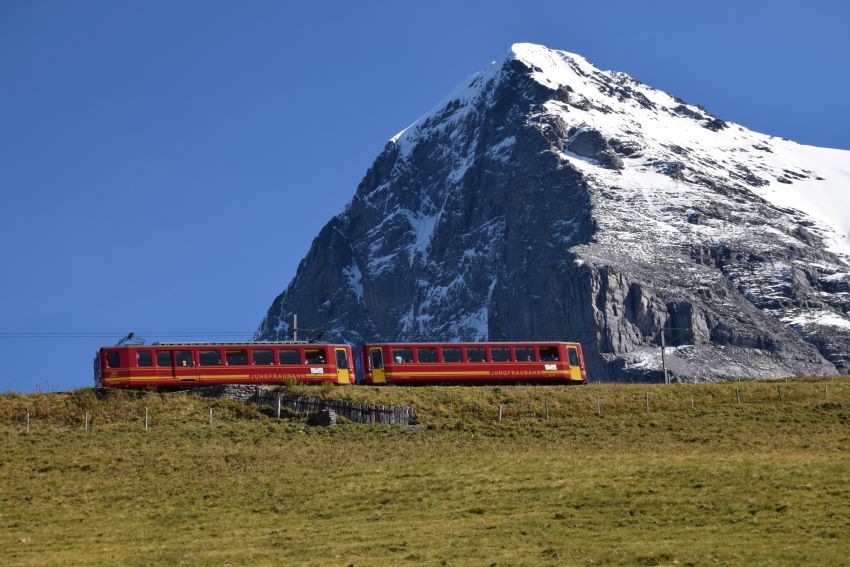 Views were fantastic and even though the temp dropped to just a few degrees, the sun kept us warm enough which was a good thing seeing as we were woefully under-prepared in shorts (well me and JB anyway). 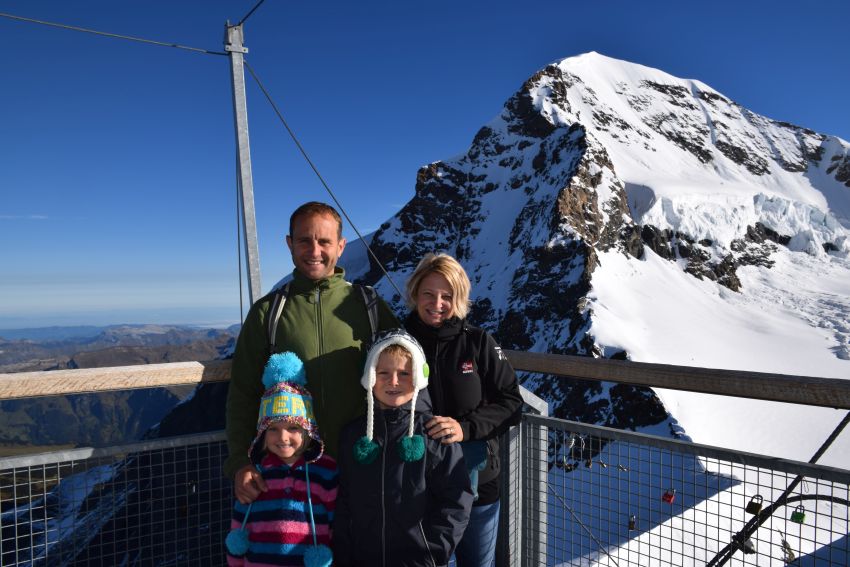 Then Abbie and I decided to strike out for the Monchsjochhutte.  Although only a 1.5-2hr return hike over the glacier, the altitude really made it an effort so we rewarded ourselves with hot chocolate and apfelstrudel when we got there. 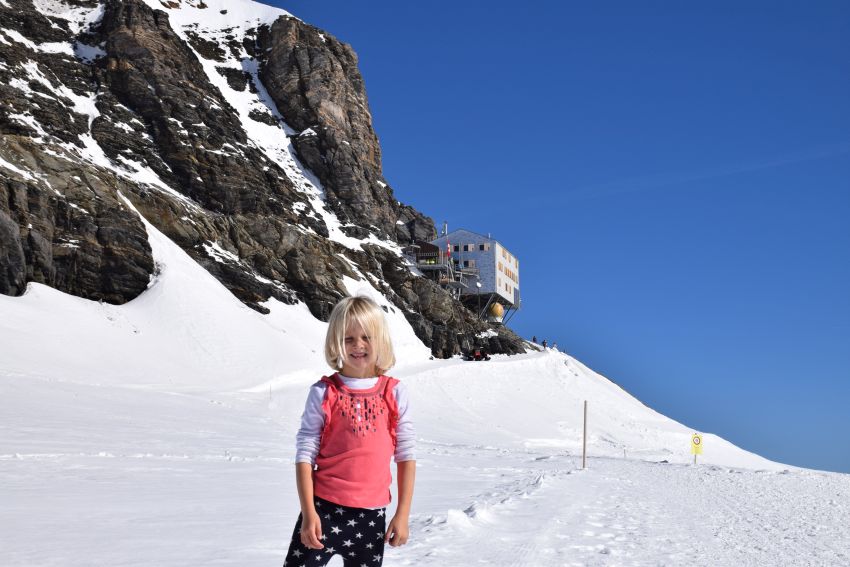 Abbie with the Monchjochshutte in the background 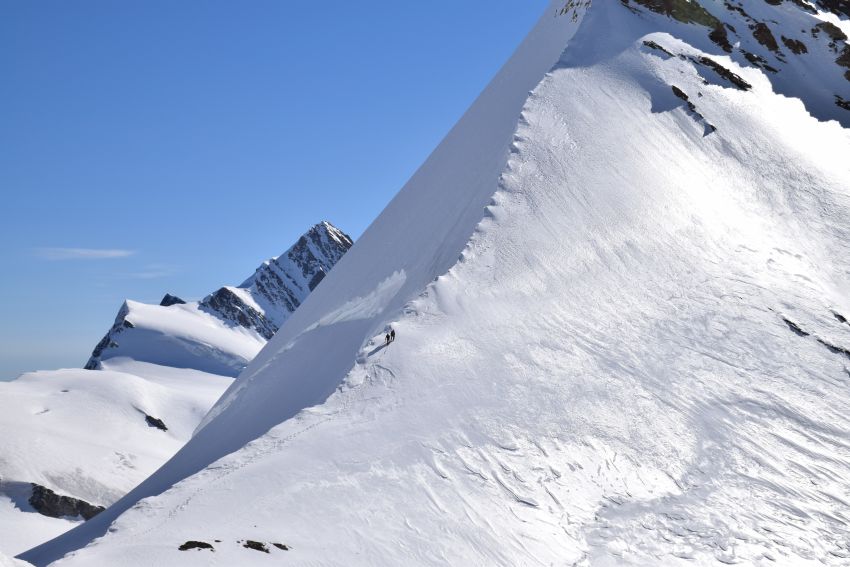 Then we rejoined the others and headed back down the mountain, hiking a section of the trip instead of taking the train the whole way.

We spent a few memorable days in our campsite in Lauterbrunnen, enjoying the stunning scenery, mountains, waterfalls and sunshine.  I did an overnight hike with James (http://eurotrip2014.com.au/my-swiss-hike)  while Chelle and Abbie also hiked around and visited the local town of Interlaken.  James and Abbie made good friends with Paisley, the campsite owner’s grand daughter and her giant dog.  We all thoroughly enjoyed our second Switzerland stint…