Ola, Ola – latest post from Portugal.  Currently sitting here, the only vehicle on a clifftop carpark somewhere north of Lisbon.  Sunset was great, seafood dinner was even better (one of very few meals out and our first at a decent restaurant)

So, since the last instalment, we’ve slowly made our way up the cost from Sagres, the far South West tip of Europe.  After several days wildcamping we were low on electricity, water and clean clothes and high on toilet waste, grey water and stench so we headed for a campsite to get things sorted.  It was yet another massive campsite with only a handful of visitors… often the case at this time of year.  Little bit weird and somewhat eerie to see scores of empty caravans and cabins lined up but at 12 Euro a night inc electricity for water views you can’t complain.

Thankfully it was also 5 mins away from a deserted but truly great surf beach- Malhao.  Leaving Sagres, I’d managed to acquire a second hand surfboard (150 Euro) and wetsuit (35 Euro).  The board is old but a perfect size and shape however the wetsuit, despite being allegedly a 3:2 was paper thin so, after checking out the waves early morning and chatting with a Czech guy who’d been camping in the dunes for the last few days I decided to bulk up the wetsuit.

So I paddled out with a 2 thermal tops and one thermal ‘long john’ under my wetsuit and joined Ompé, the Czech guy and only living person for miles around.  The waves were spectacular – easy 5 foot, maybe 6-8 foot on the bomb sets.  We both caught a few, encouraging each other with hoots and shouts but then I started to get cold, really cold.  The wetsuit just couldn’t handle the frigid March Atlantic – needed a 4:3 at least.  So after an hour I just had to paddle in… took 20 minutes and I cramped up like never before but eventually made it to the beach.  I must have been verging on hyperthermia as I couldn’t stop my teeth chattering for a good 45 minutes after I got out, despite the 20-odd degree sunshine and lack of wind.  Anyway a memorable surf!

We came back the next morning and the kids had a play in the sand dunes, bit of fishing and a walk along the beach. 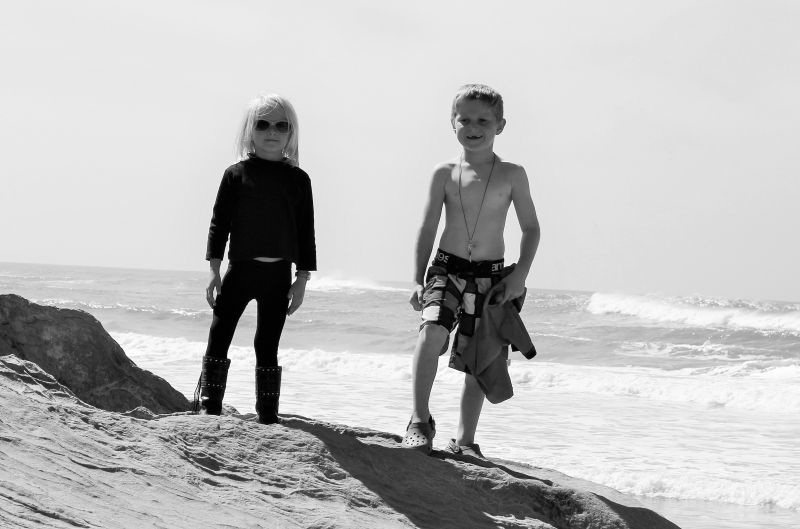 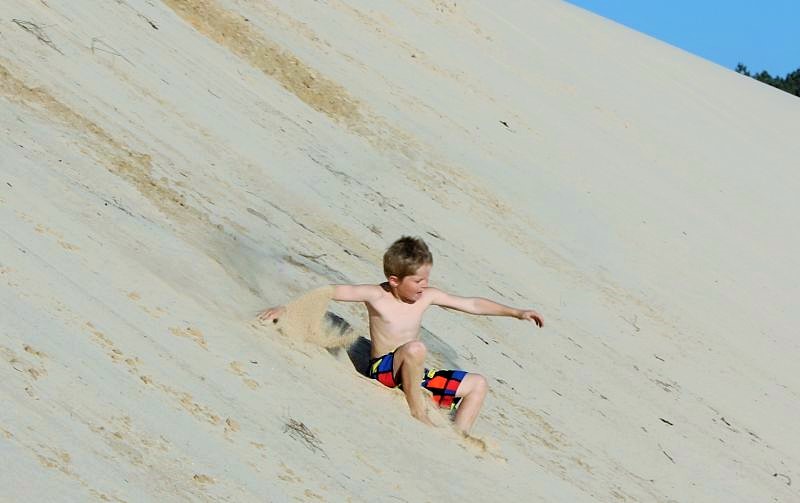 Next day, we drove around and Chelle attempted a bit of schoolwork while I squeezed in another surf – this time with no less than 3 thermal tops and 1 thermal pants which made the difference. 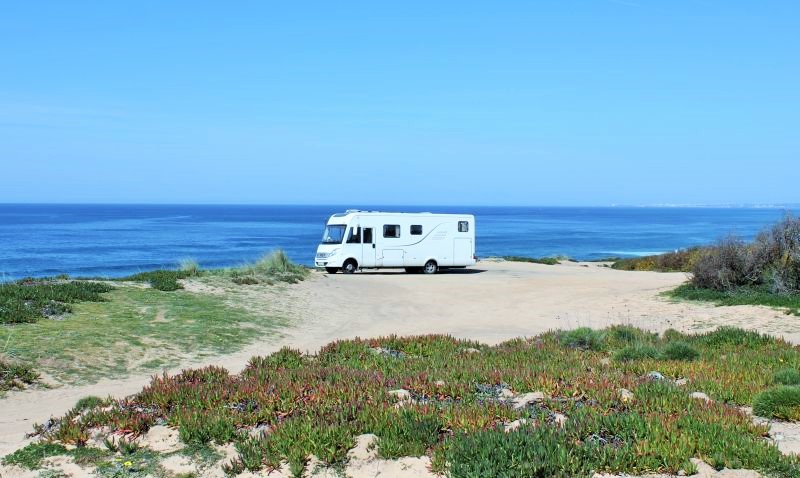 So after my surf fix, we headed inland to a place called Monsaraz, an ancient hilltop town.  There was a well-known aire there where you could stay but the access was really tight and I wasn’t game to risk grounding Frosty again so instead we just parked up in the main carpark after all the other cars had left.  As you can see, it was nothing less than an idyllic position with the view in front of us and the centuries old town behind us. 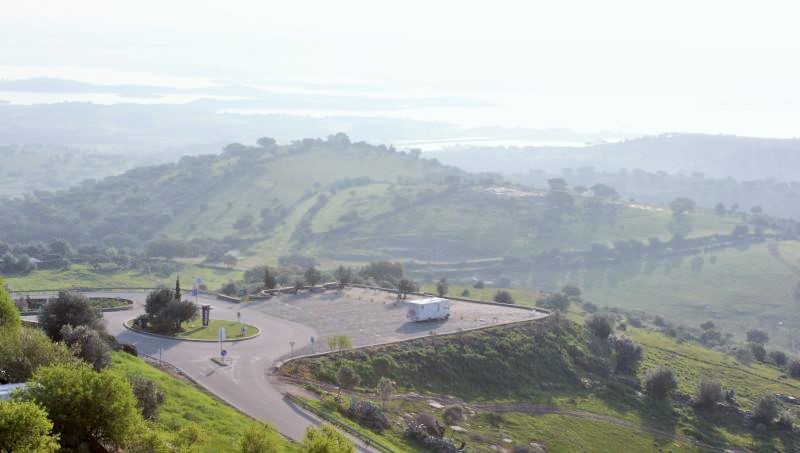 What a spot to spend the night 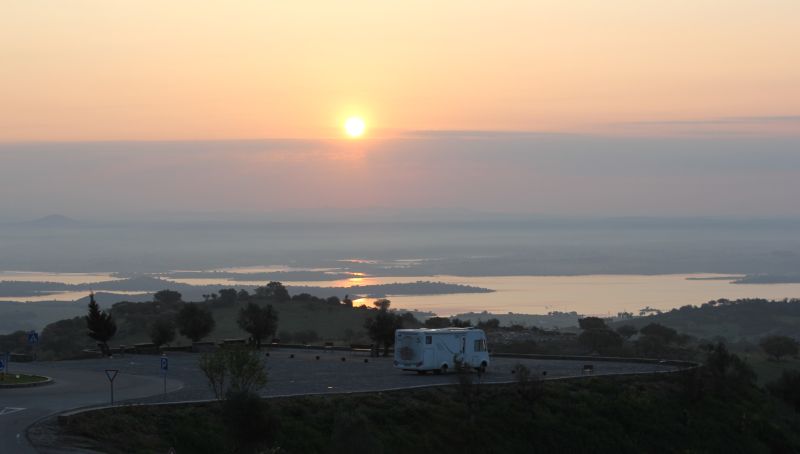 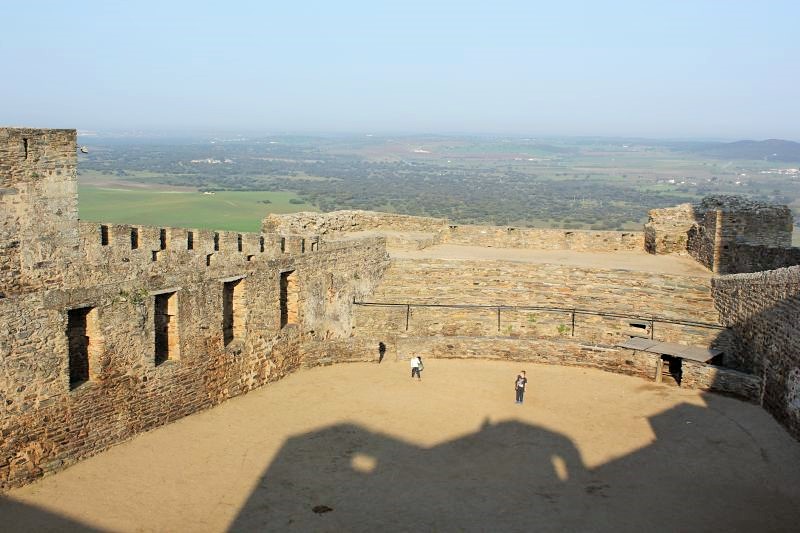 Next day, after schoolwork, we hit the road for Evora, a world heritage town not far away.  This was an essential stop as it was one of our Post Restante pickup spots.  Received a pressie for James, some gas adapters and speeding fine reminders (from Sydney) for me but no new schoolwork which was the most important thing and a bit of a worry.  So rather than head on as we planned, we instead took our time to check out the town and its amazing sights so we could return the next day to see if it arrived (it didn’t). 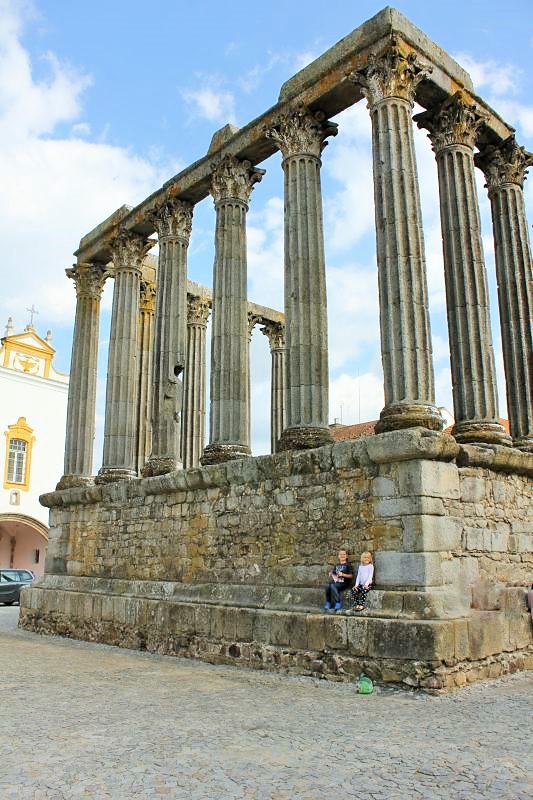 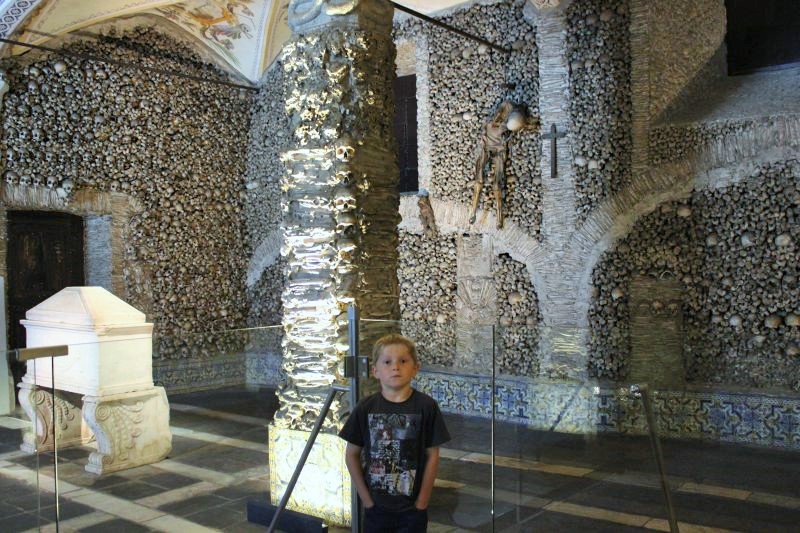 Chapel of Bones. The inscription at the doorway says ‘We, the bones who are here, are waiting for yours’

While we were there we heard about this megalithic site not far away from the town so we set off to check it out.  It wasn’t far away but hard going for our huge van along the dirt road and by the time we got there it was late afternoon so, we decided to park up for the night in the little carpark 50m away from the site.

I loved it!  The site was called the Almendres Cromeloque and is a stone circle arranged in alignment to the summer equinox.  Or something like that.  But the amazing thing is, it’s 7,000 (seven thousand) years old.  That’s 2,000 years older than Stonehenge.  It’s actually one of the oldest existing monuments erected by mankind!

So to stay the night within a few metres of it was truly am privilege.  Needless to say, every other car had long since departed so we were the only ones for miles around and got to experience it in the afternoon, dusk, night (James and I did a torchlight and spooky excursion), dawn and mid-morning.  Each time having the whole site to ourselves.  I took about 100 photos but here are some of the best of this sacred site. 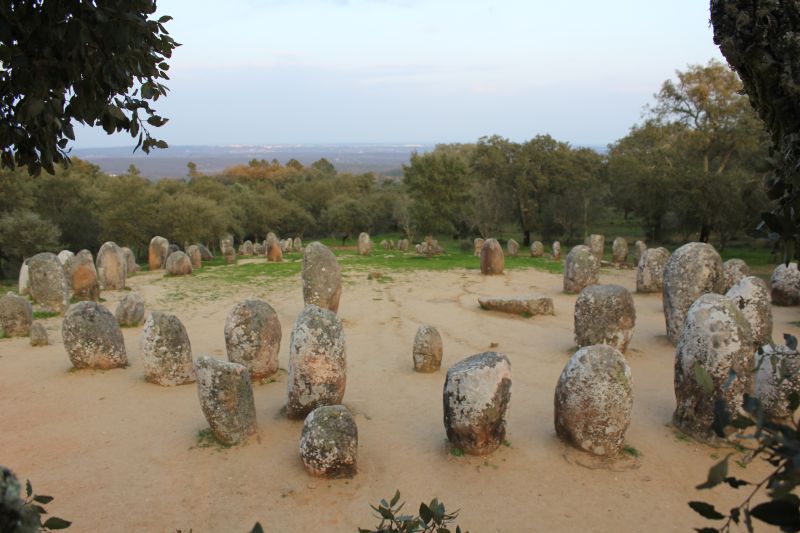 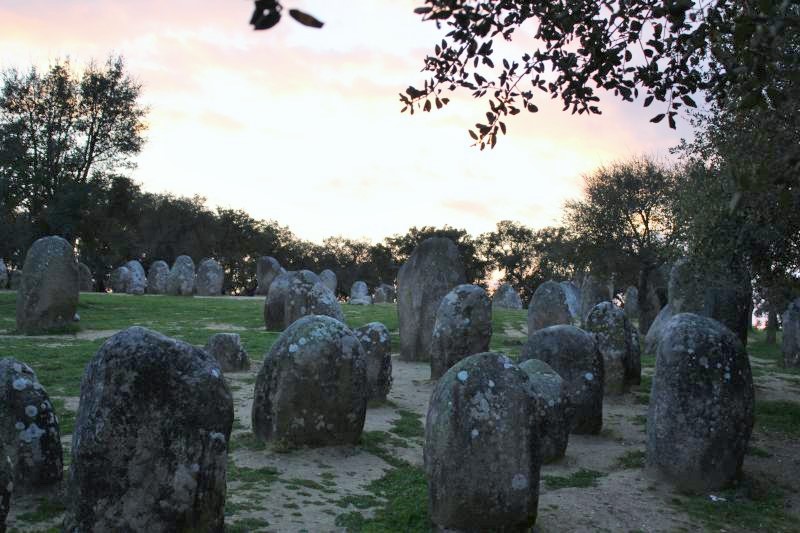 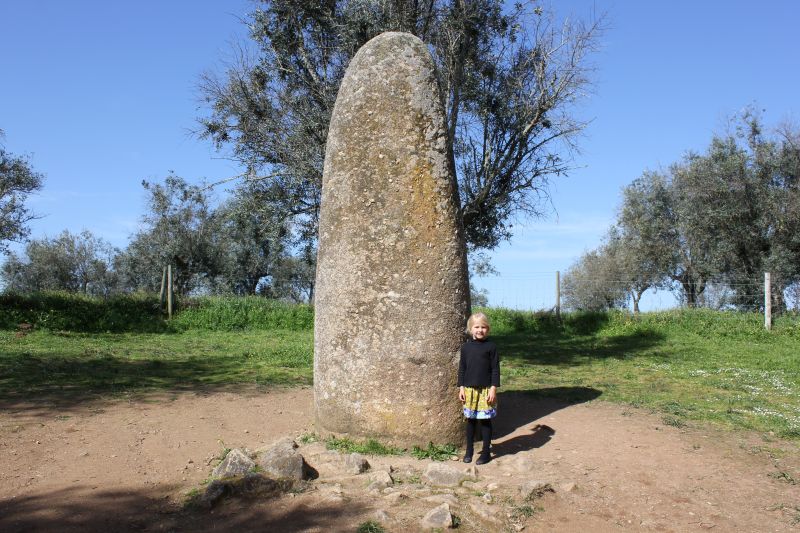 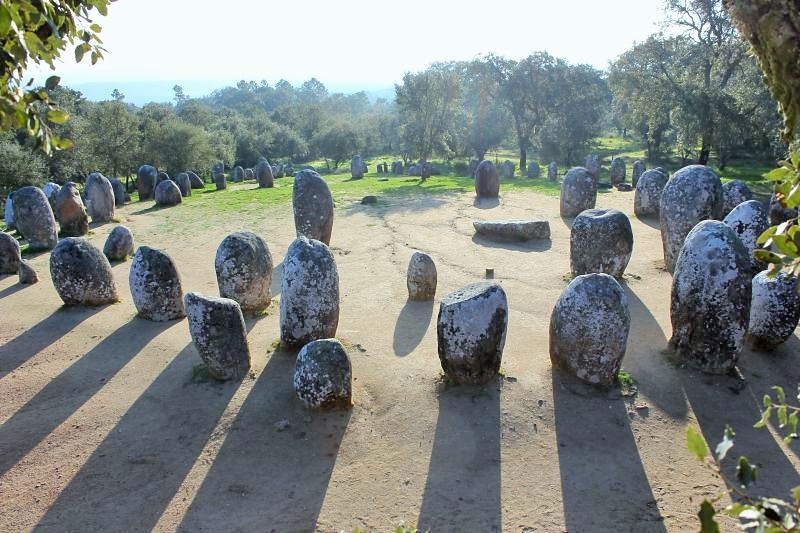 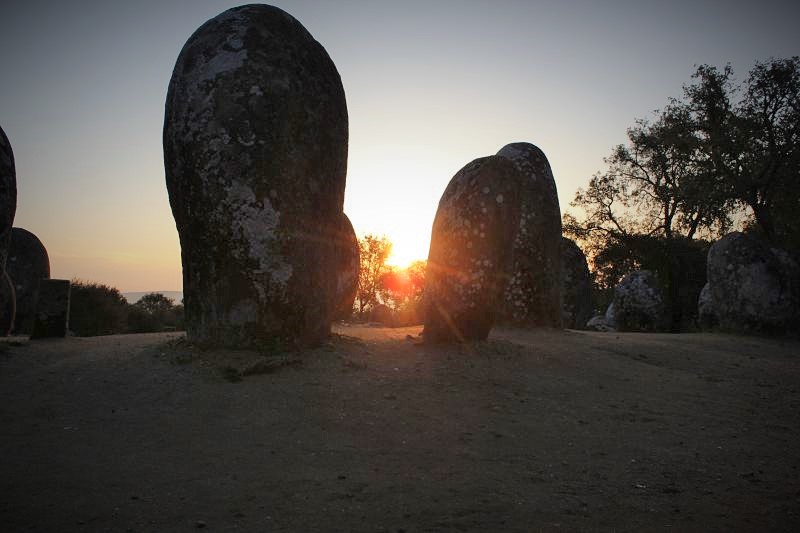 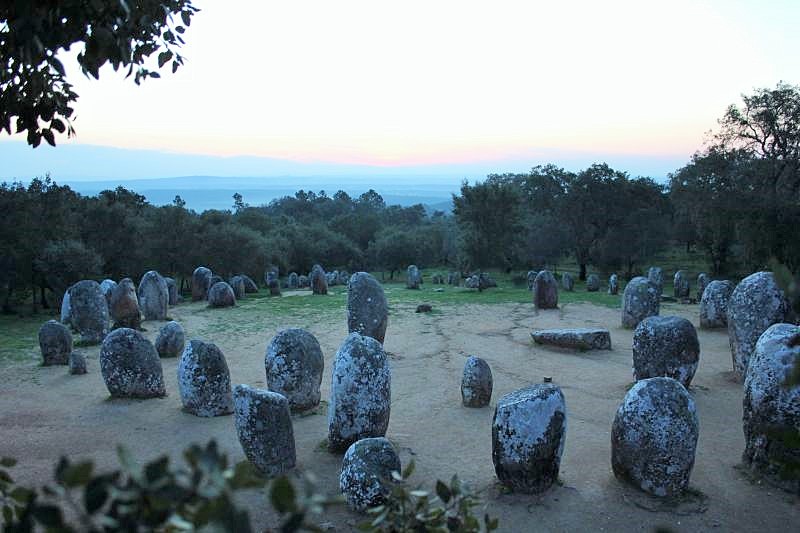 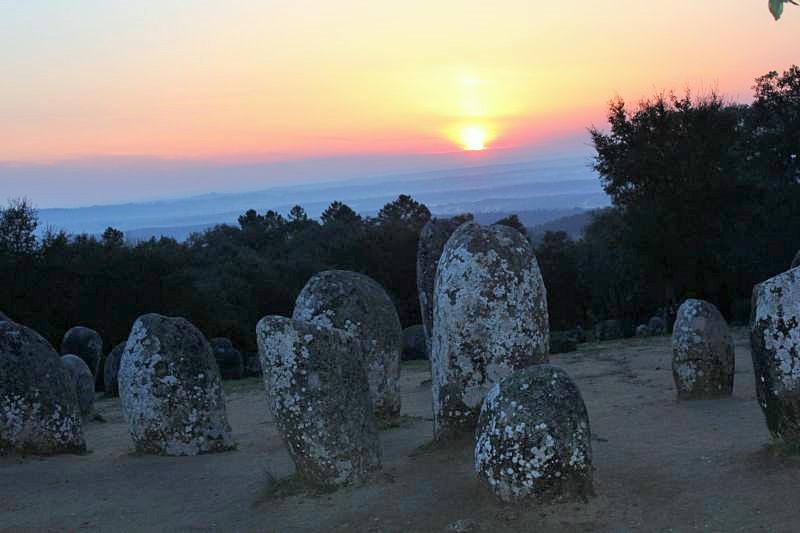