We left Sicily with fond memories of the people and places but personally, after several close calls that filled me with terror, I was looking forward to getting into the quieter driving environs of Sardinia.  Quieter they were but no less hair raising…

Anyway first up was to take the 12 hour ferry crossing which all went smoothly and before we knew it, it was 7am and we had landed at Cagliari.  Showers came and went so we hit the road and headed towards the west coast where I was keen for a surf and we’d also lined up some horse riding for the next morning. 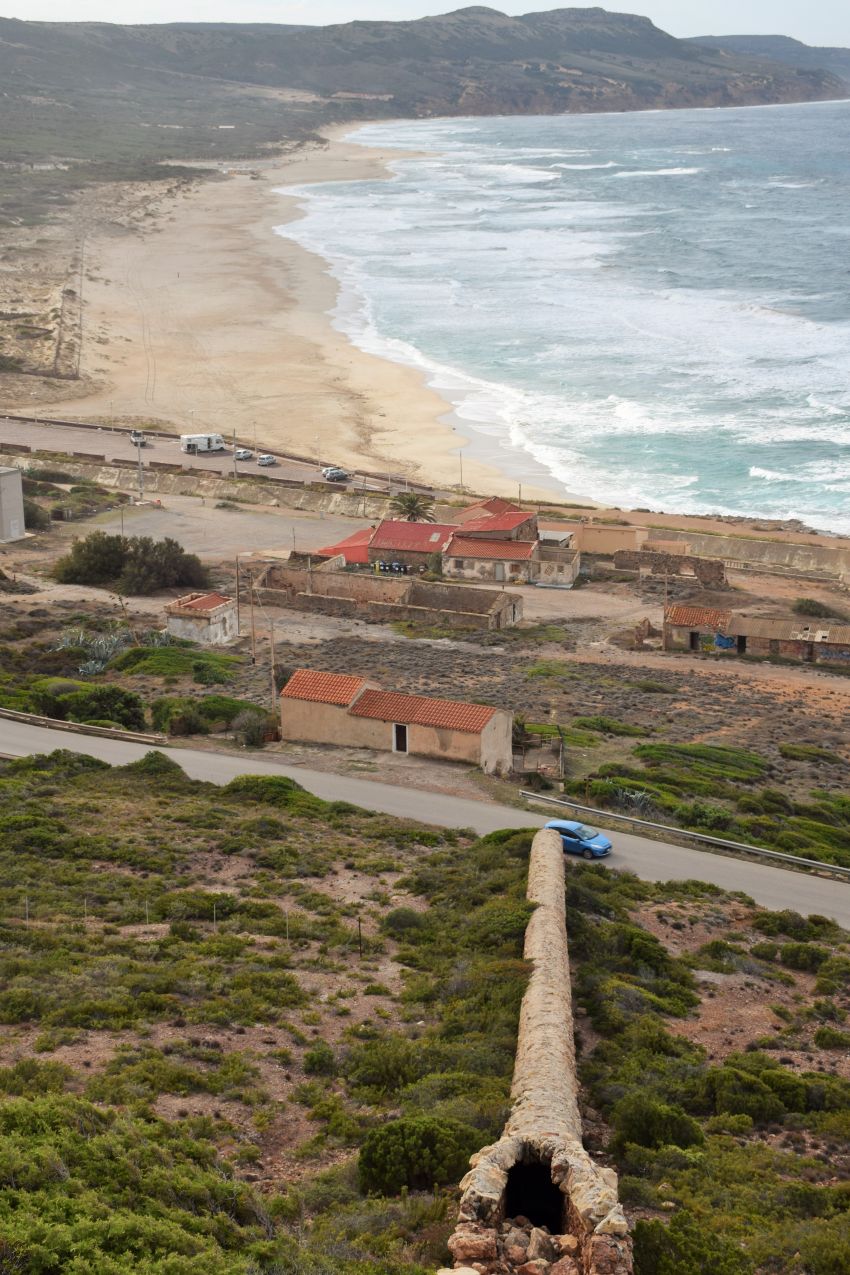 At the top of a strange old tunnel… no idea what it was for. Frosty in background

After a bit of to-ing and fro-ing we found a carpark right on the beach and, while the rain hammered down, I took the board out and had a great surf in onshore but consistent 4 footers.  Towards evening, the rain eased and we strolled along the beach with the footy in the late afternoon sun. 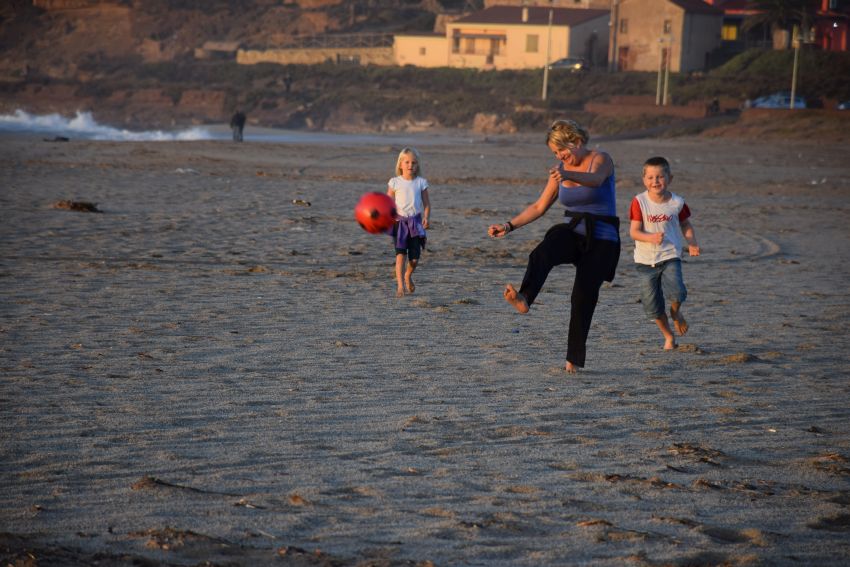 It was a top spot to spend the night and every passerby was keen for a chat and very welcoming (at this time of year, Sardinia is all but closed for tourists. 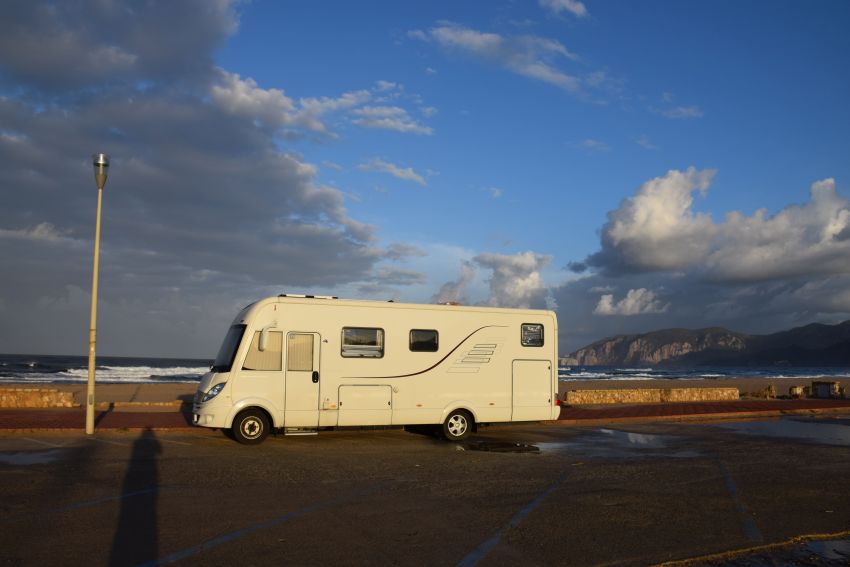 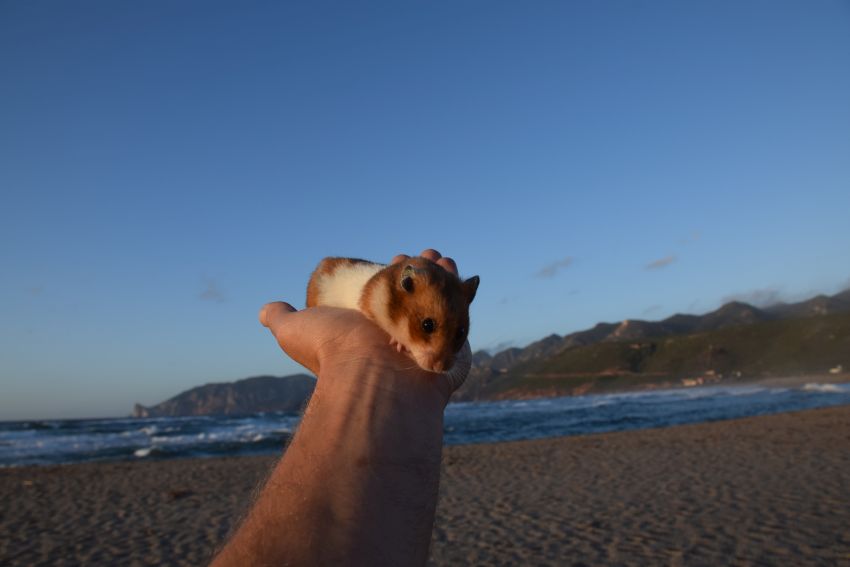 Nice one of ‘Dizzy’ 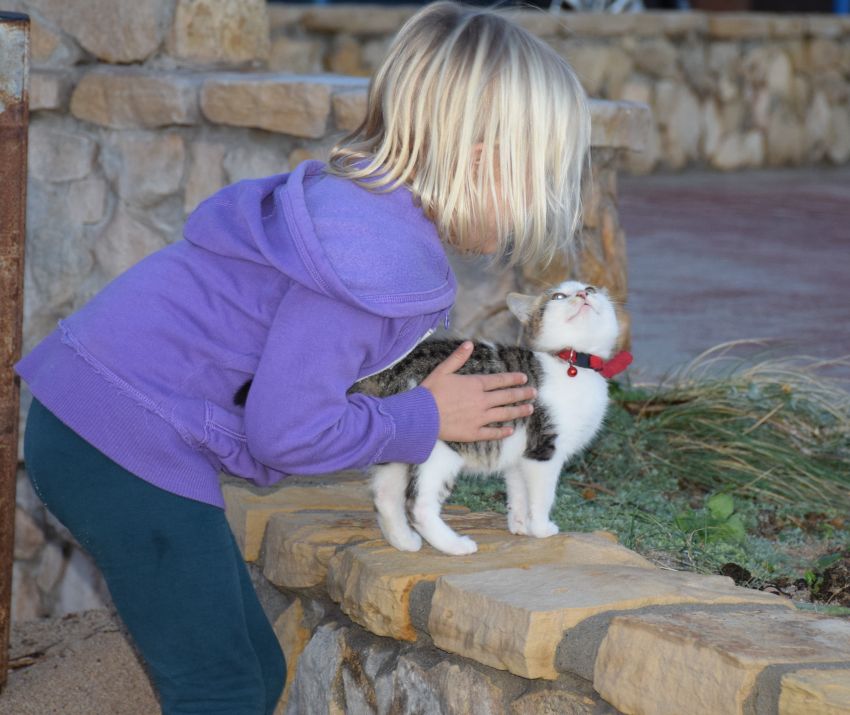 Louie loves her cats – this one definitely not a stray!

Again our plans were thwarted when we came across a sign warning of a bridge with 3.1m clearance in 24kms.  We are 3.15m and didn’t want to risk the slow trip down the bumpy road so instead we came out and around and headed for the coast again in the Costa Verde. 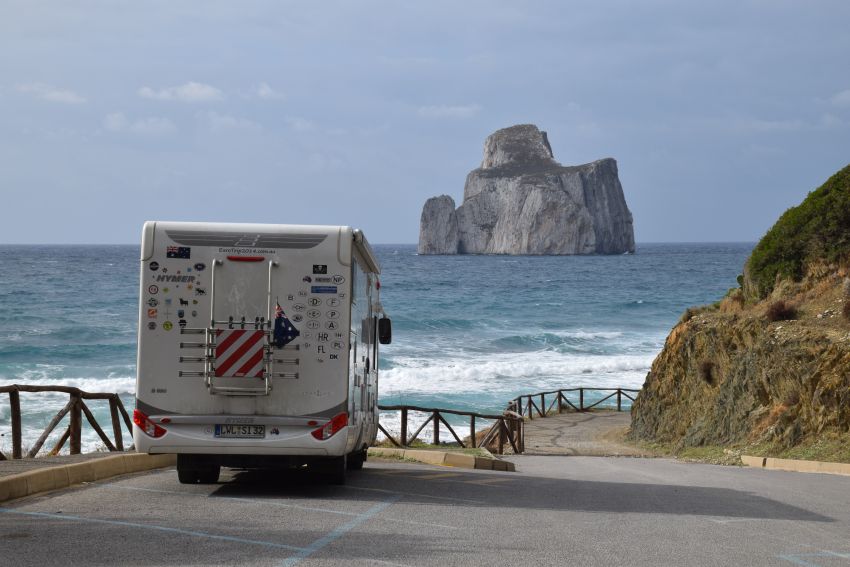 En route to the Costa Verde 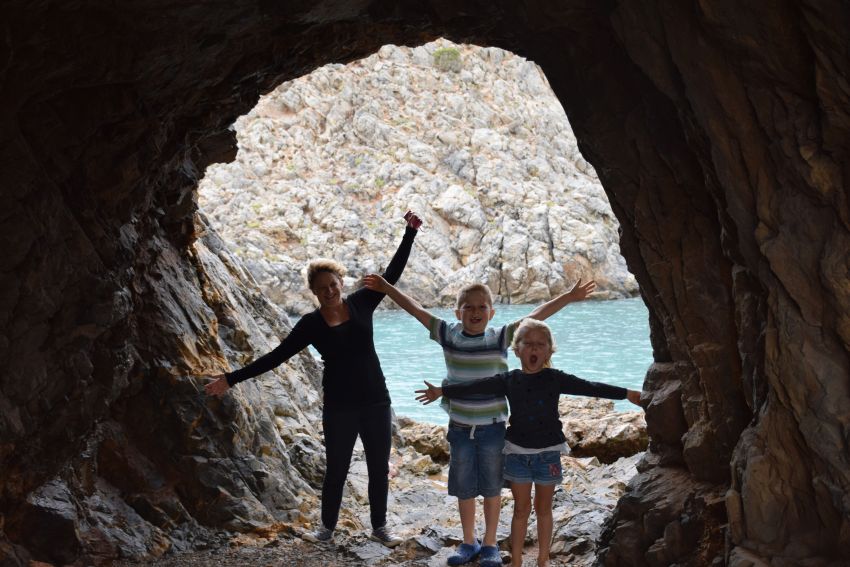 A windy cave (what does a dead fish on your doorstep mean?)

After a long potholed drive we came to a deserted village on the coast.  It may have had several hundred houses but every one was vacant… a theme to be repeated often in off-season Sardi. 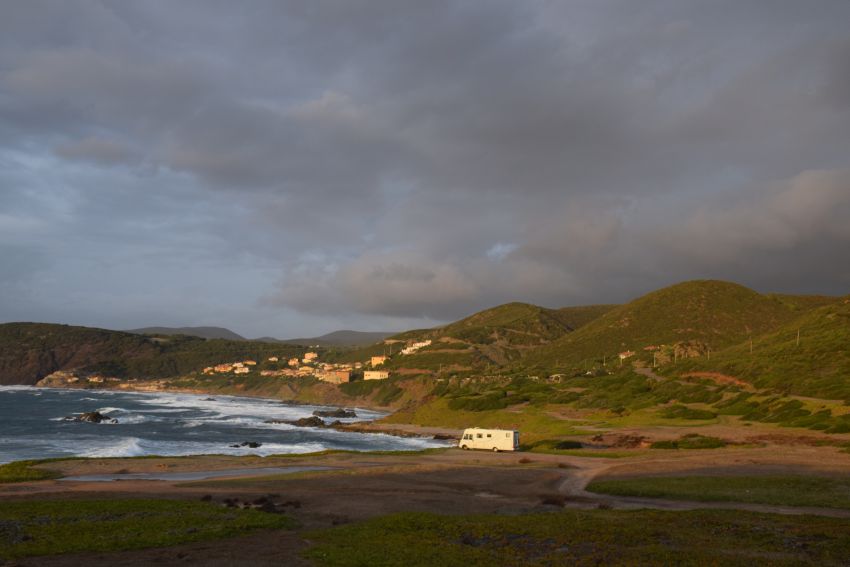 The complete lack of human presence meant we had the whole place to ourselves – a town, two headlands and 3 or 4 beaches – and also meant we could happily ignore the ‘no camping’ signs as we settled ourselves in for the night. 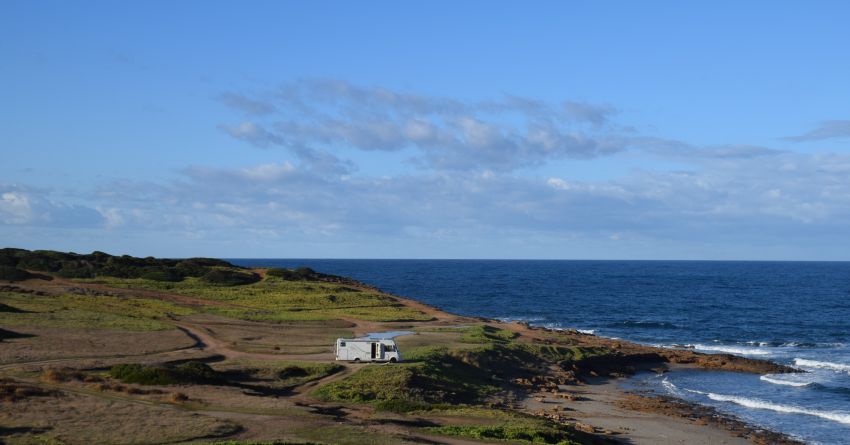 All alone… and uncrowded surf

A final surf the next morning before the swell ran out and a nudie swim for the kids and we took our leave of Gutteru I Flumini, as it turned out the town was called, and left the coast heading inland.

We arrived at Nuraghe Losa, just as it was getting dark and parked up in the car park.  For information, a ‘nuraghe’ is an ancient (3-4,000 year old) megalithic structure unique to Sardinia and scattered all over the island.  This particular one is one of the best and, next morning, for a modest payment, we had a good explore around the incredible structures.  Remember, this is old, old, old! 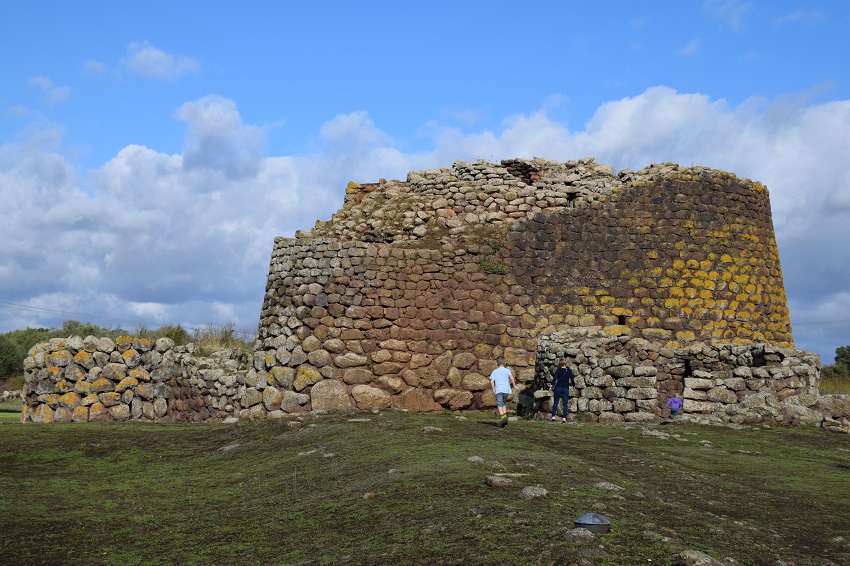 I should mention that the guy who takes cares of it was one of the many lovely Italians we’ve met over the last few weeks.  They really are a great bunch.  At least 90% of them have a cousin in Melbourne and 10% of them have lived in Australia at some stage of their lives.  This guy was the latter and his wonderful Italio-Aussie accent was a pleasure to hear… Australians will know what I mean!  He insisted on giving the kids a wooden spinning top each and buying us each a coffee just because he was a nice guy.

We then set sail for Dorgali in the mountainous east of the country.  Plan was to visit the ancient village of Tiscali – again a megalithic settlement but this time situated within a cave at the top of a mountain.  We drove through the winding mountain roads and eventually, after a few wrong turns and incorrectly translating the instructions of several well-meaning locals we picked up the trail and turned down an increasingly narrow and remote road through the fields and vineyards of the valley.

We were nearly at our destination, when we got chatting to a farmer and his wife who turned out to be from Austria and could even speak some English!  With Chelle’s German we had a good old chat for half an hour or so while James and Abbie played down by the river.  As well as letting us know they were there if we needed anything, they also directed us to a parking area a few kms down the road and convinced us to do the Gola Gorrupu canyon trek rather than the Tiscali mountain climb. 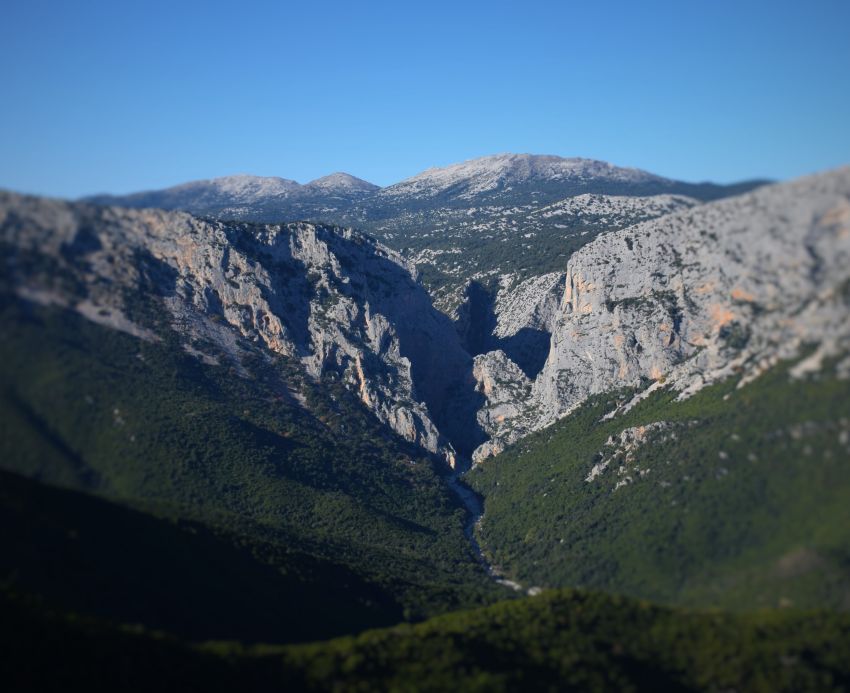 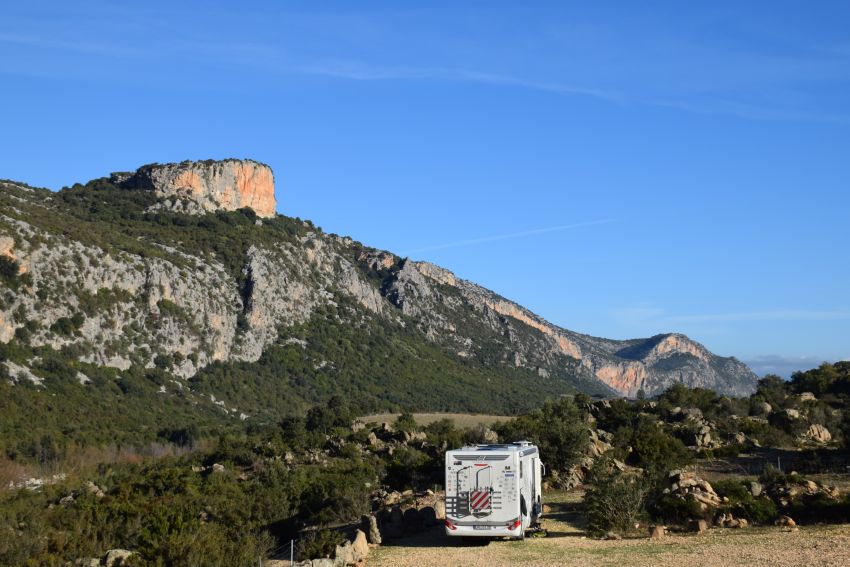 Not too shabby wildcamping spot

Both excursions were 5 or 6 hours return but the former would be easier with the kids, they assured us.  We happily took the locals’ advice and found ourselves at a most serene spot in the valley.  Evening was approaching and the two other groups present (a couple who had done both treks and also recommended Gorrupo over the other and a group of mountain climbers who I had a chat and a beer with) shortly left leaving us all alone in the middle of the mountains.

Not quite an Alpine start but nevertheless we hit the trail-head at shortly after 9am.  A few wrong turns but after 3 hours or so along a pleasant path following the river, we made it to the start of the canyon in time for lunch. 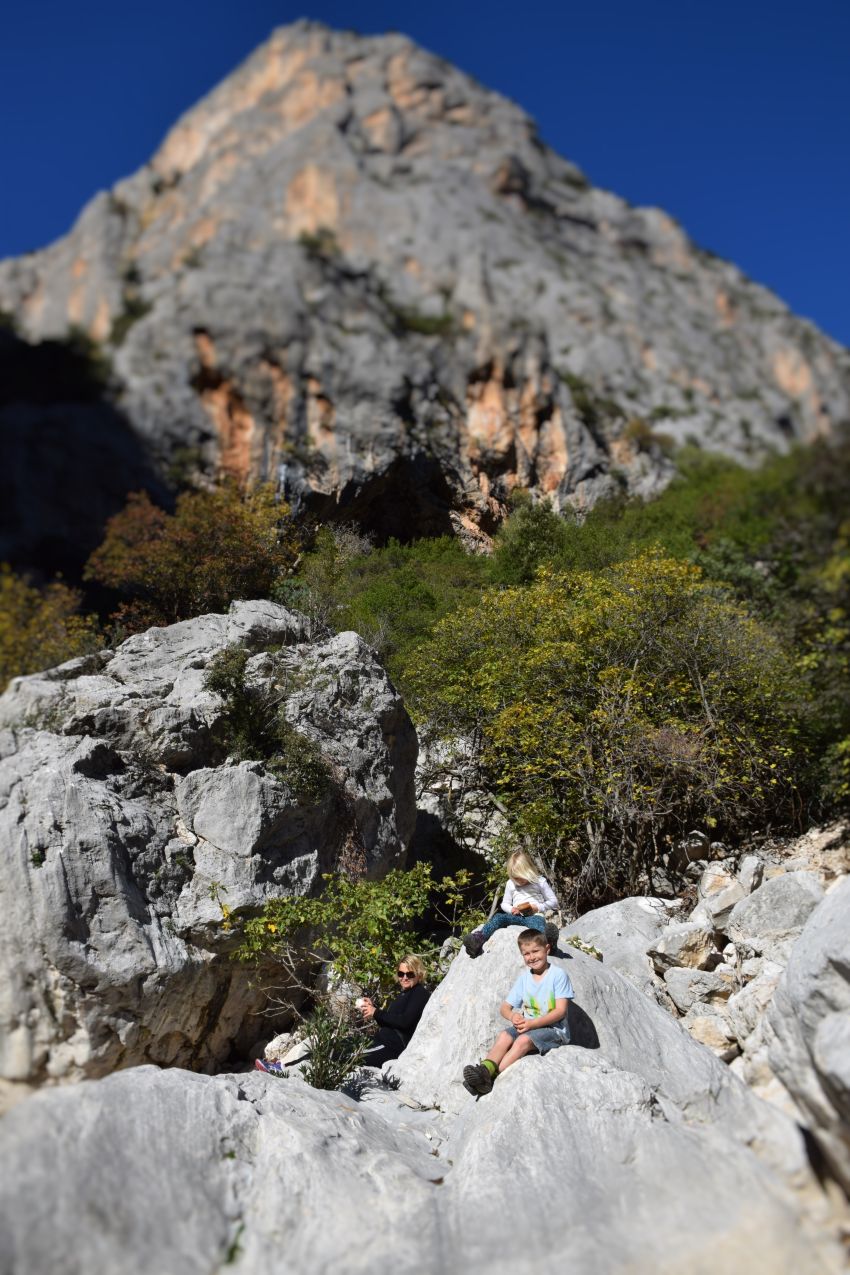 We all had a scramble around in awe at the size of the cliffs, caves and the boulders.  The ‘Grand Canyon of Europe’ is Gola Gorrupo’s nickname and it was very impressive. 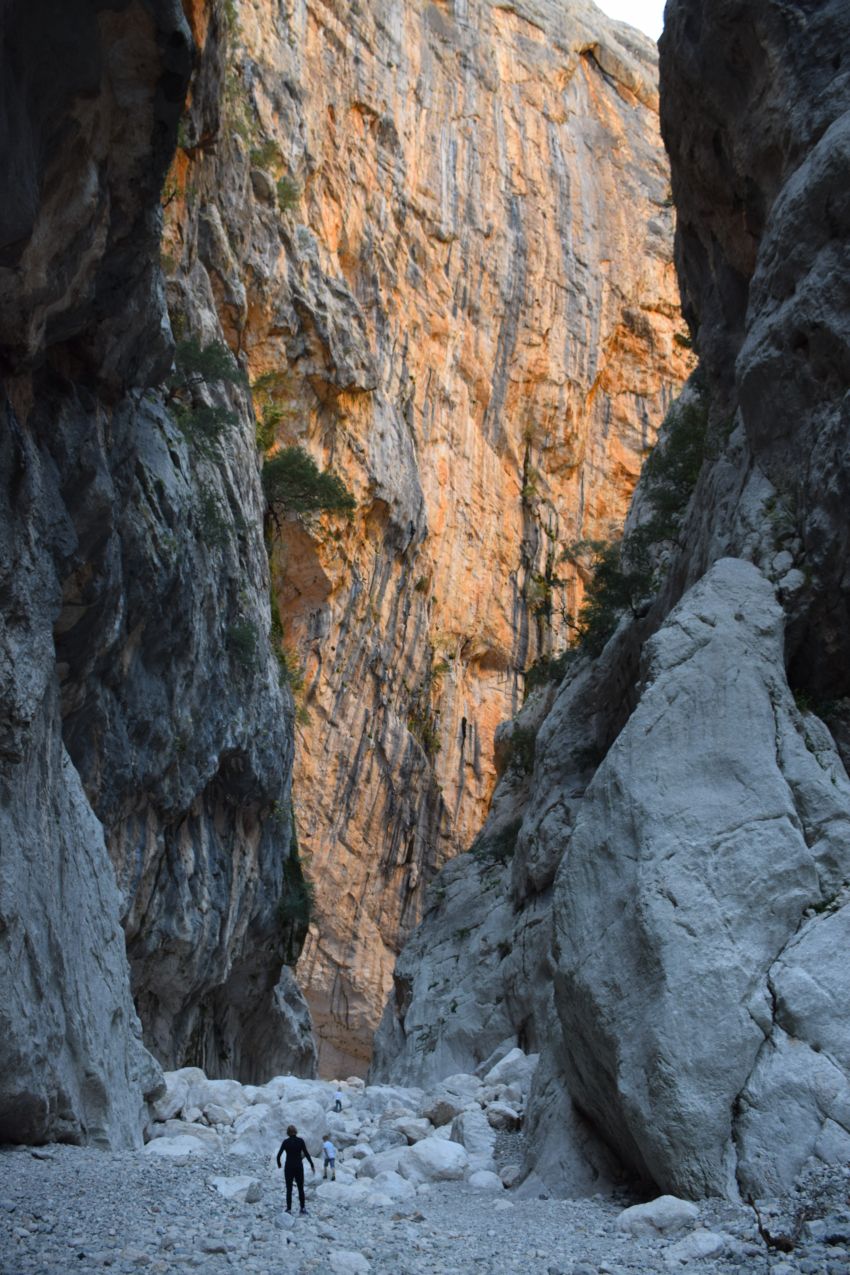 Chelle and Abbie then turned around and headed back while James and I forged ahead another kilometre or so into the gorge negotiating our way through the giant boulders by leaping, climbing, scrambling or crawling as required.  Amazing stuff and officially James’ ‘best hike ever’. 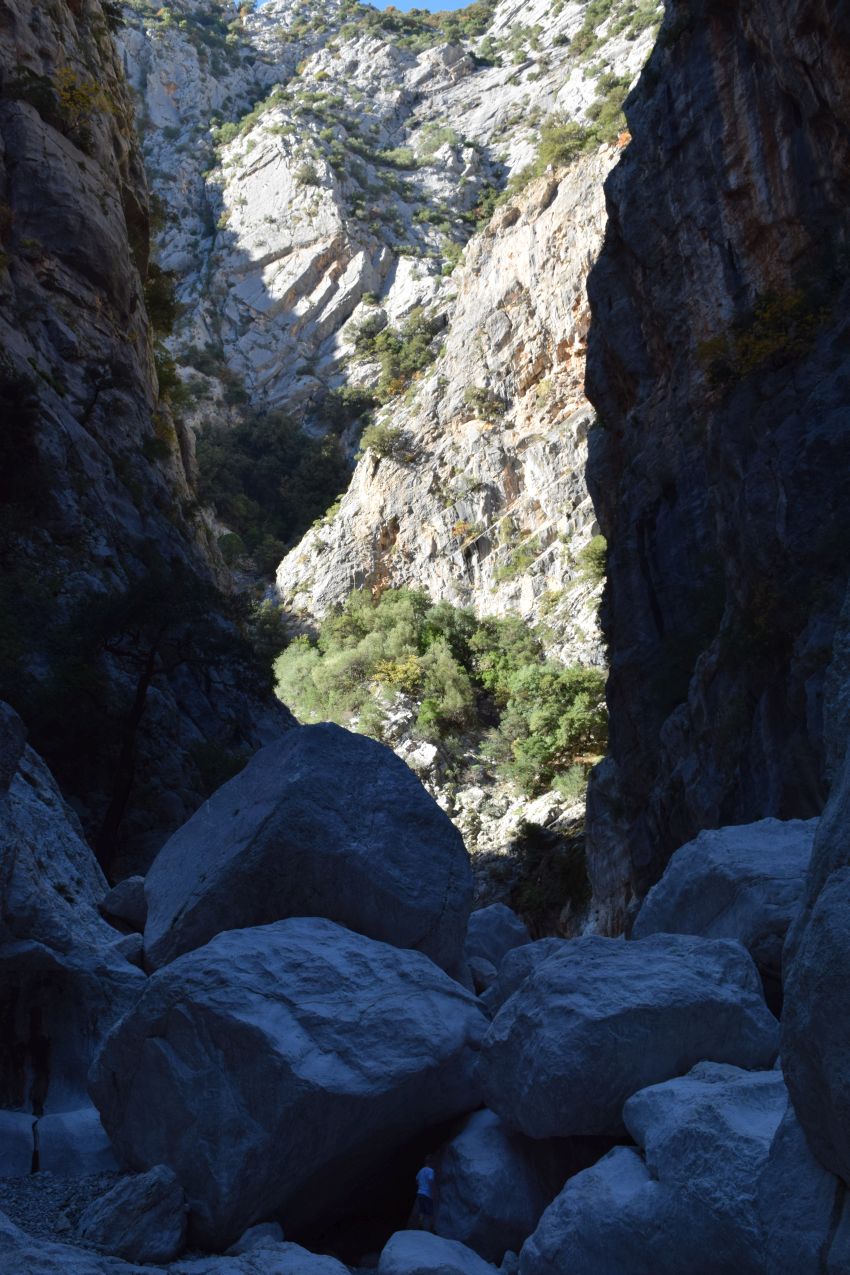 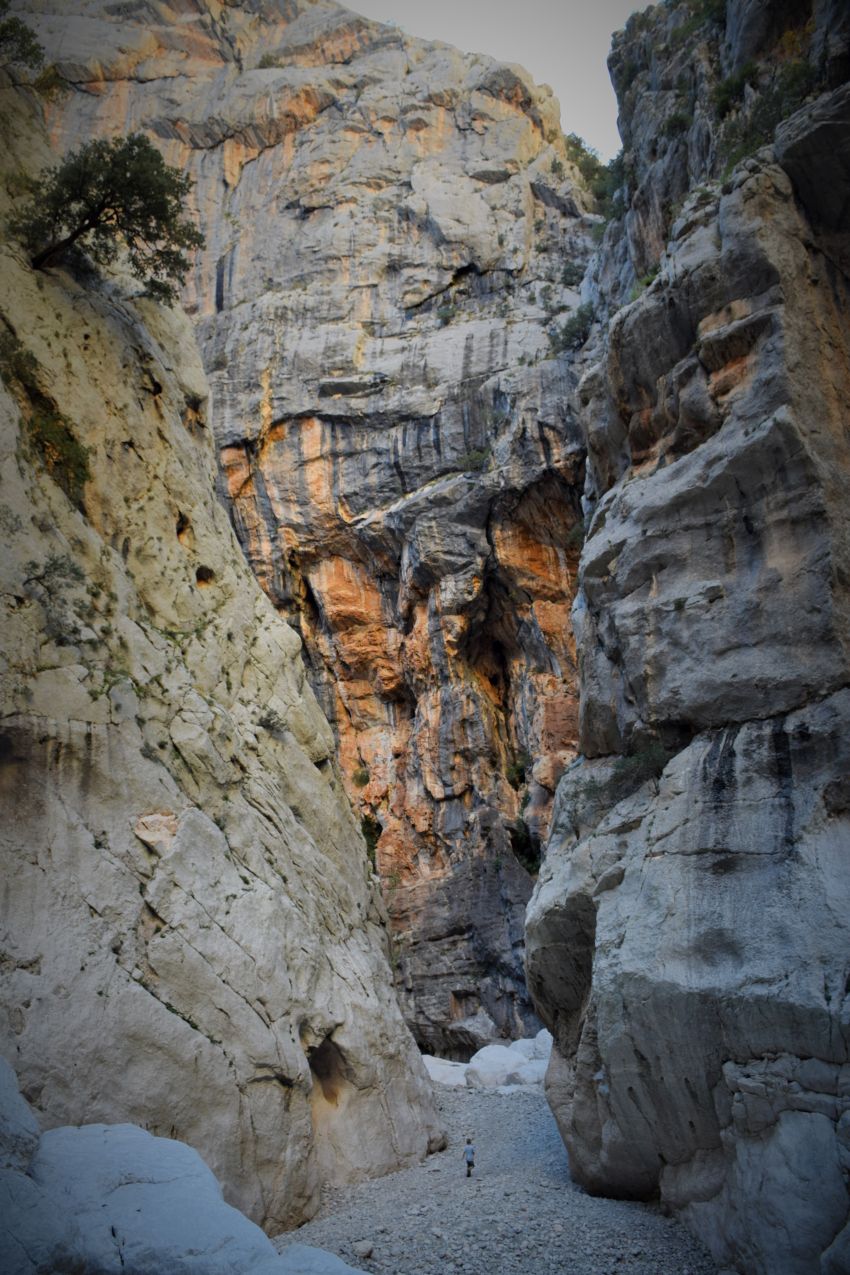 Biggest canyon in Europe… so they say

We caught up with the girls a few hours later back at the van and, as we were exhausted and it was such a beautiful spot, all to ourselves, we decided to stay a second night (rare for us!).  Having some extra time on our hands we got a rip-roaring fire going and spent some time marveling at the stars. 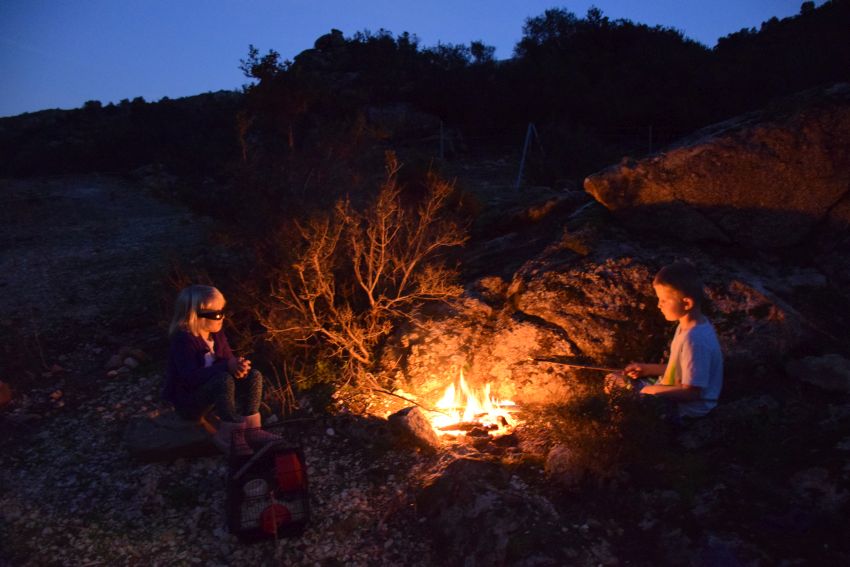 The Austrian couple had also said something about seeing the animals on the other side of the mountain range.  ‘Turn right at a red building at the top of the pass..’ was what we understood so next day we headed off not sure what to expect.  In the end, we took the wrong turn twice. 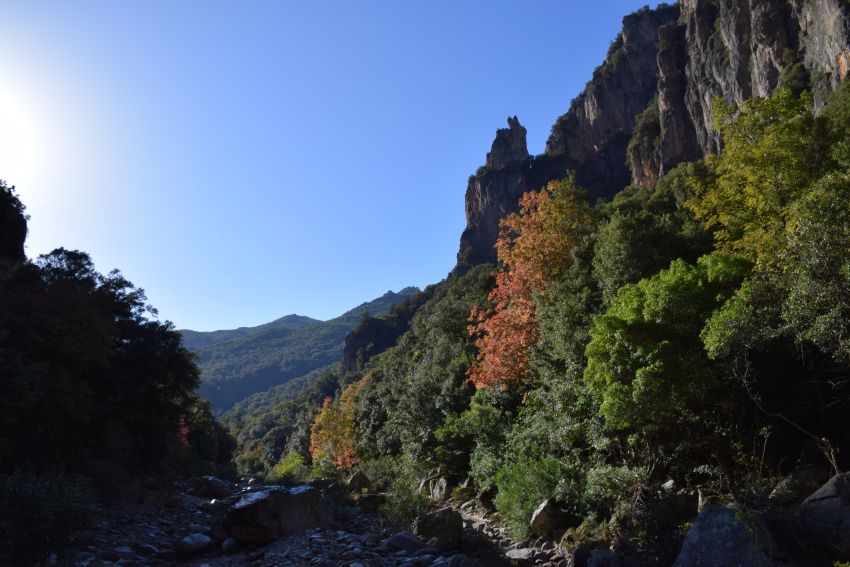 First time was down a dodgy one-lane road hanging off the side of a cliff.  After a km or so we decided this was bad news so, with Chelle walking behind, started the painstaking task of carefully reversing all the way back (turning was simply impossible) to the main road.  After about 20 minutes of inching backwards, trying not to look over the edge, a man came up with his donkey and spoke to Chelle who managed to understand there was an area for turning another 500m down the road.  So the ‘great reverse’ was abandoned and we headed forward once more, found the turning area and escaped intact. 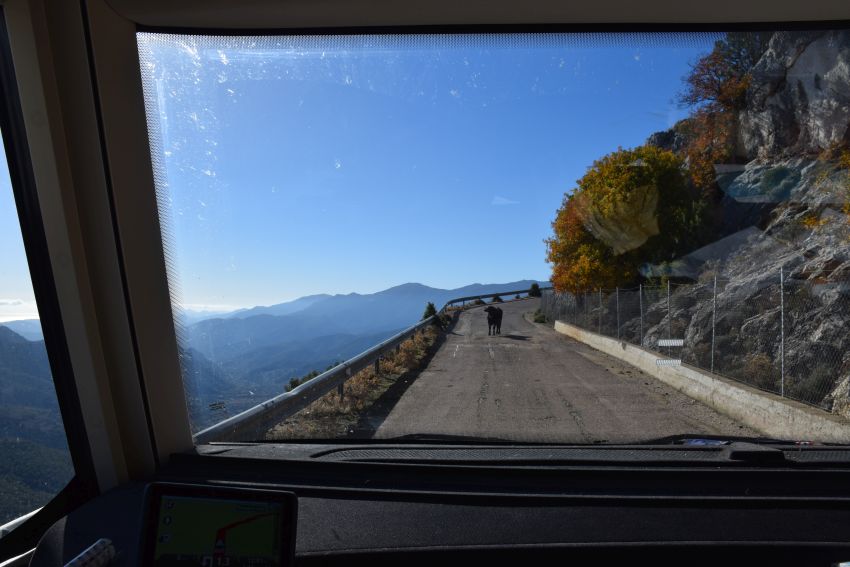 Bull staring us down

Next right hand turn took us down a much better road although again, driving became an issue as we squeezed between cars and buildings into the small Piazza of a village called Urzulei.  Again, locals were agog and we wandered into the little ‘Alimentari’ to get some provisions and bread for lunch.  I got chatting to a guy called Almando who, having lived in Australia previously could speak good English.  He was amazed to see Australians in his tiny village and we chatted for ages and he met all the family.  Yet again, another top bloke and he invited us to stay at his and we exchanged contact details.  Then, as we finally said goodbye and gathered our shopping bags, Almando insisted on paying for our groceries – he wouldn’t take no for an answer!  Another humbling act of generosity and kindness from an Italian who was a complete stranger just 20 minutes earlier.

We had lunch in the square then did another about-face to the main road.  Shortly after, we realised what the thing with animals was…. they were everywhere and ambled unhurriedly across the roads.  In the space of a few kms we had to dodge bulls, goats, donkeys, sheep, cows, giant pigs and even saw wild horses and a pack of wild dogs off the road.  Was very entertaining. 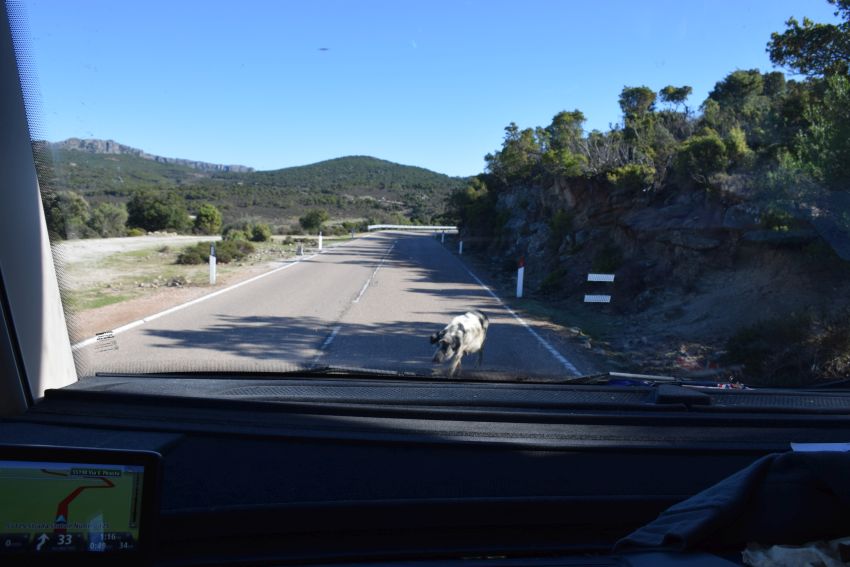 Wild pig on the main road in South Eastern Sardinia 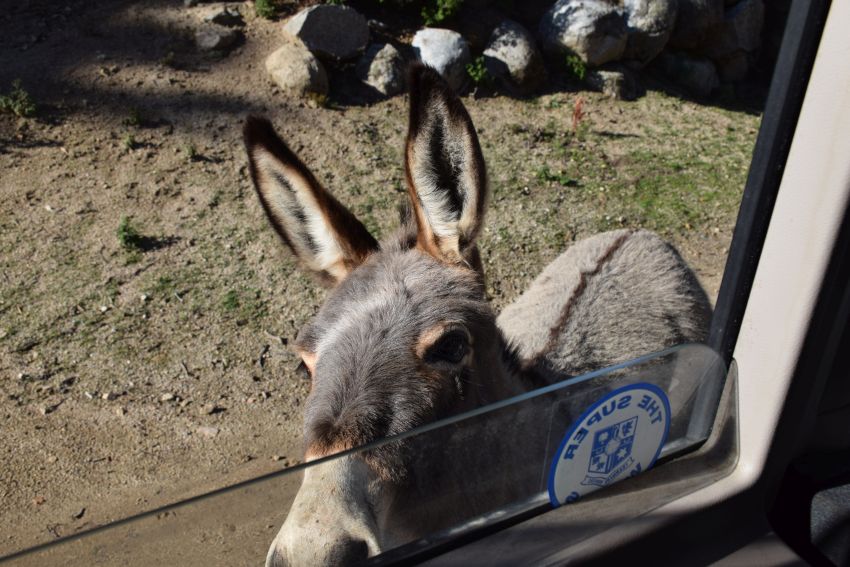 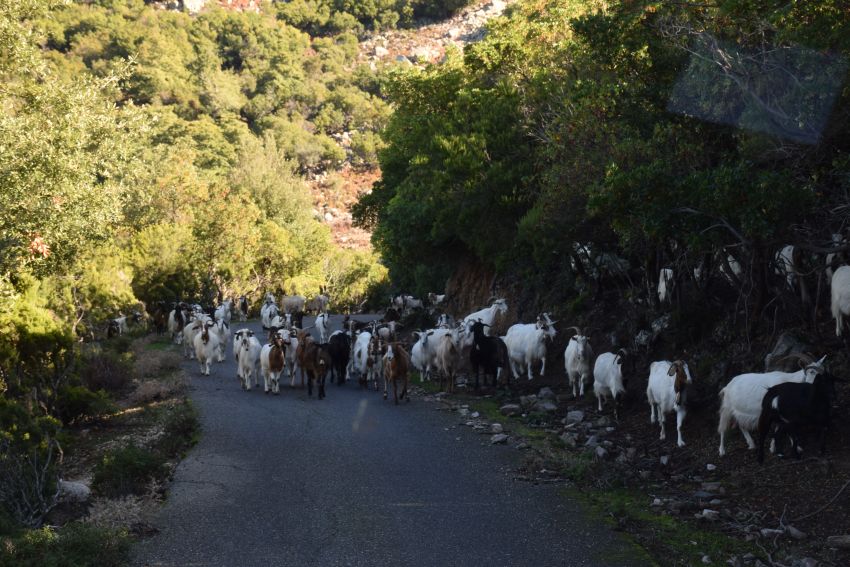 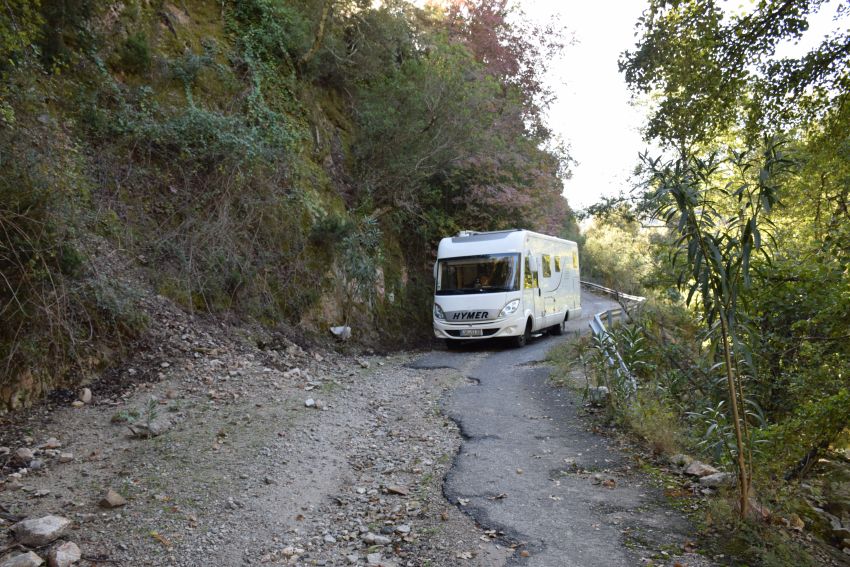 After doing the ‘animal loop’, we had meandered back down south so the next day we turned north aiming for Santa Teresa Gallura which is the ferry departure place for Corsica.   It was a productive day and we came across a self-service car wash place where we gave Frosty a well-overdue bath, stocked up at a supermarket, did the toilet necessities and even got two giant loads of washing done at a laundrette.  We then headed towards the sea (east coast this time) and found a remote and idyllic place to spend our last night.  We had to ignore the no campervan signs yet again and this time even had to physically remove the height barrier (we replaced it after entering of course!) to get in but we found a wonderful, deserted car park on the tip of the Capo Coda Cavallo in which to pass the night. 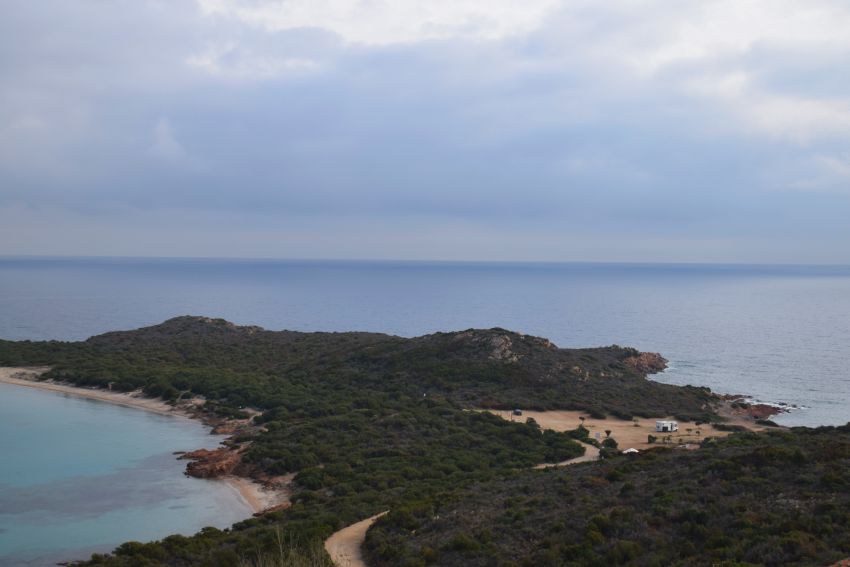 Next morning, the kids an I had a swim (water still not tooo bad in late November) and Chelle and I jogged about the deserted roads before setting off on our final leg towards our planned 3:30pm ferry departure. 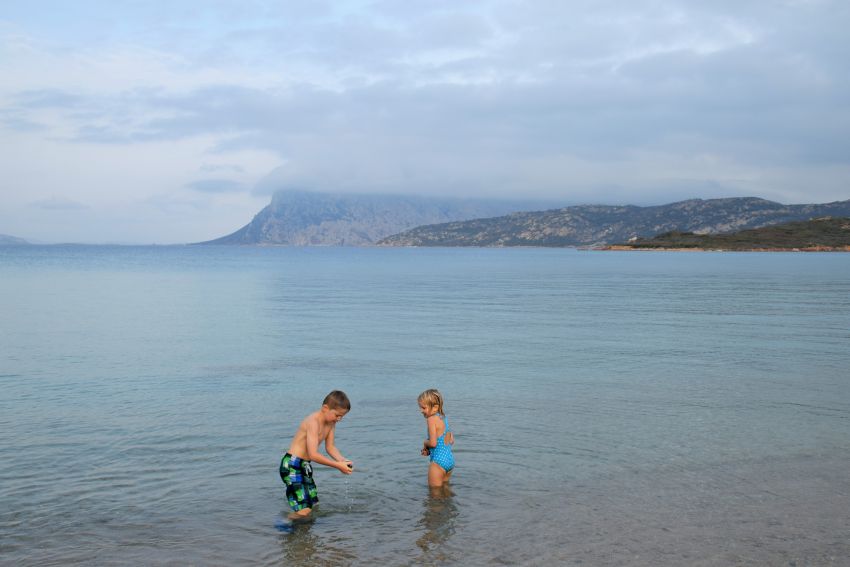 We got there in plenty of time but turned out that the boat was actually full.  Not something we’d anticipated as the island was so, so quiet it seemed impossible.  But, of course, on a reduced schedule, that’s what it was so we joined the queue on the ‘waitlist’ – the biggest vehicle and only campervan in the lineup.  As luck would have it, we got in and, reversing in up the boat ramp, squeezed in with inches to spare.

So, after about 8 weeks, it was goodbye Italy and Sardegna – a destination that had exceeded all our expectations.  With a fraction of shops open and the  narrow, pot-holed roads, no official overnight places and having to hustle for the camper services whenever we could, Sardinia wasn’t the easiest place to stay but the people, nature and wildcamping opportunities made it a firm favourite with us all, as is the magnifico country of Italy.

One Response to Sardinia