Spain and on to Portugal
CATEGORY: Portugal, Spain

The latest update starts us off in El Torcal national park.  James wanted to stay something really remote where he could wake up on his birthday.  So we headed to this national park along some windy roads through rural Spain passing some immaculate ‘Pueblo Blanco’s on the way.

The park is famous for its incredible rock formations which certainly were spectacular.  The weather was cold, windy and foggy which in added to the wild and rugged atmosphere.  So we wandered around for a while taking in the scene, spotting some mountain goats along the way. 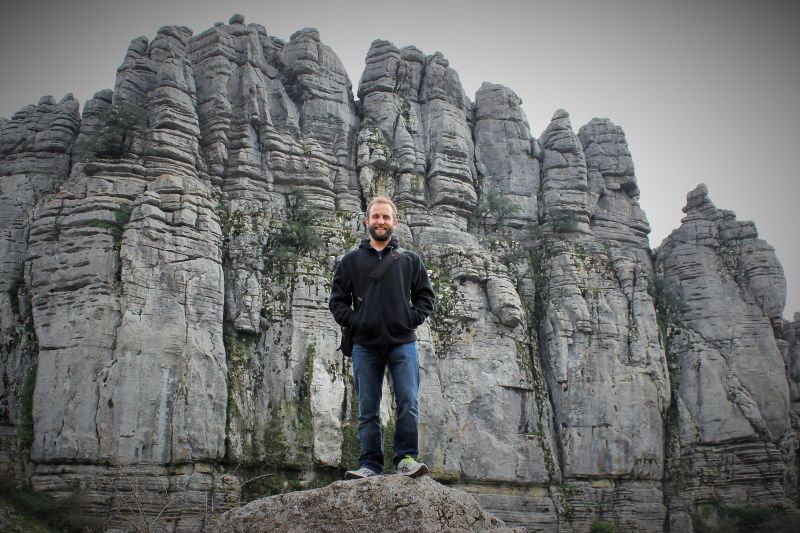 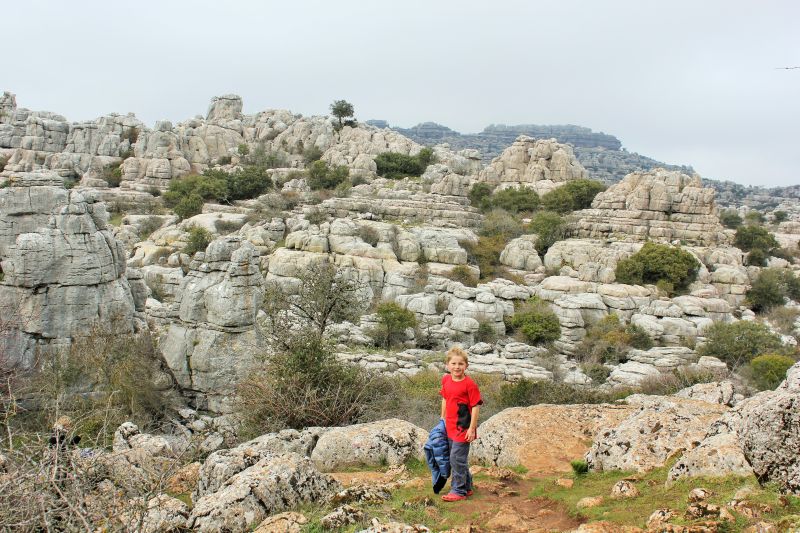 We decided to stay in the car park at the bottom of the mountain for the night with just one other campervan for company containing Graham, a lovely bloke from the UK and his wife Katie.

We slept well despite being buffeted by the gale force winds during the night then woke to James birthday.  He was so excited and opened his pressies and Chelle and I took turns going for a run back up to the top of the hill.  Was really hard going with the steep climb, the wind and the sleet which stung our faces and arms but we both pulled it off – 8km return over tough terrain.

After we got back and had brekky there was a surprise knock at the door and Graham from the camper next door poked his head in.  He had not one but two lovely little carefully wrapped presents for James that he’d scrounged from the van.  It was such a lovely gesture as we’d only briefly met for a few minutes the night before and mentioned in passing it was James’ birthday.  All the more special for James as he’d only had his pressie from us to unwrap.

Hmm, seems I’ve written quite a lot for just 24 hours.  Not sure what’s going on so let me accelerate….

Following El Torcal, we headed for Ronda – a town famous for its bridge (which they used to throw people off in the olden days), cliffs with houses hanging on the edge and bullfighting.  We stayed the night in a campsite 2kms out of town and checked out the sights… 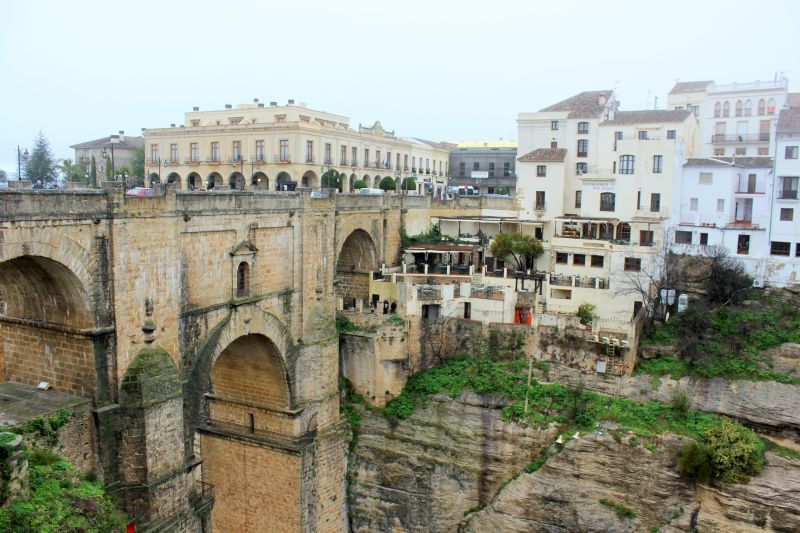 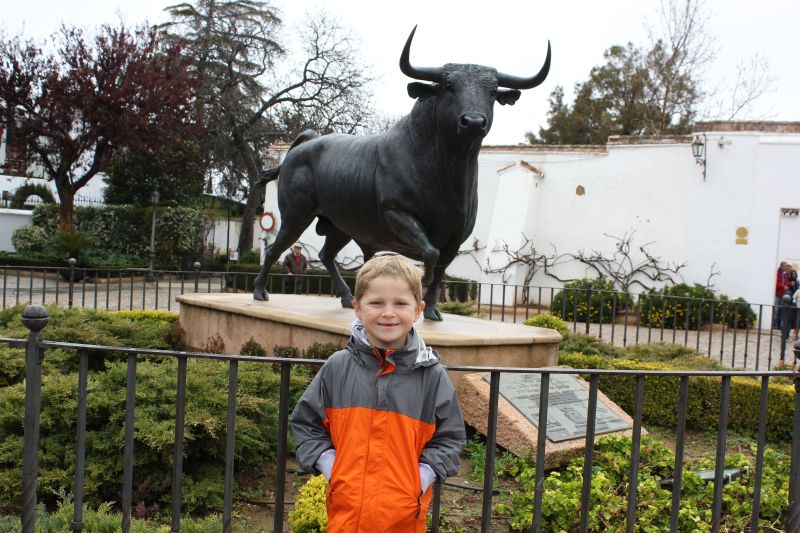 Next day we headed to the outskirts Cadiz which is on the SW coast of Spain.  We were excited as we were meeting my brother Mark there who was making a huge effort to fly in to Malaga, hire a car, drive 3hrs each way and come and hang out with us.  He was squeezing it in between his mate’s bucks weekend and wedding in the UK.

We spent a lovely few days with him staying in a campsite cabin while we bedded down in Frosty.  Carnaval was in town so we caught the ferry in and spent a memorable day in the city checking things out.  I even managed a surf, the first in 2 months, and we treated ourselves to beachfront lunches, dinner out and a bit of shopping.  Shopping happened to include a little hamster so, yes, we now have a pet! 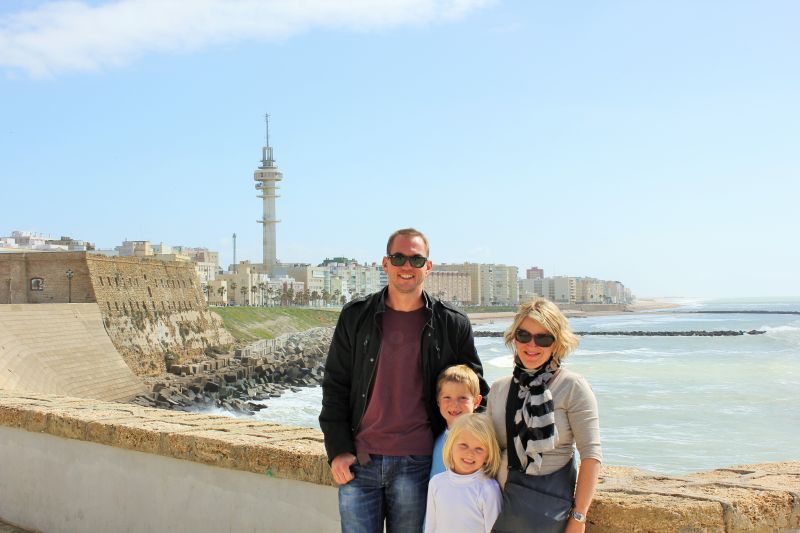 Great to see Mark and he was on form as we mooched around the city, the beach and also hopped in his car to visit a lovely beach 50kms south of the city.  The kids also hooked up with a couple of American kids who were staying longterm on the campsite and attending the local school.  Was good for them to mix with other kids so we stayed an extra night so they could make the most of it.

Then we moved on… having spent quite a few days in campsites, we were keen to do some wildcamping and really get amongst it.  Campsites are great for things like security, electricity, getting washing done, washing the van and that sort of stuff but it’s hardly the real Spain. 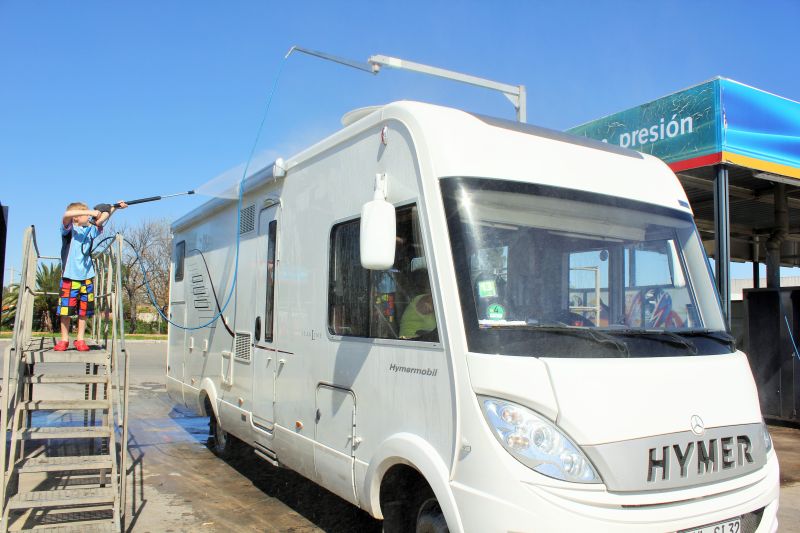 So we headed to El Rocio, a place recommended by Irish Mick, the wildcamping expert.  We all ended up loving this cowboy town which is sleepy for most of the year except for one holiday week where the population swells from 1,000 to 1,200,000 in September!  While we were there, streets were sand and dust and absolutely deserted at siesta time 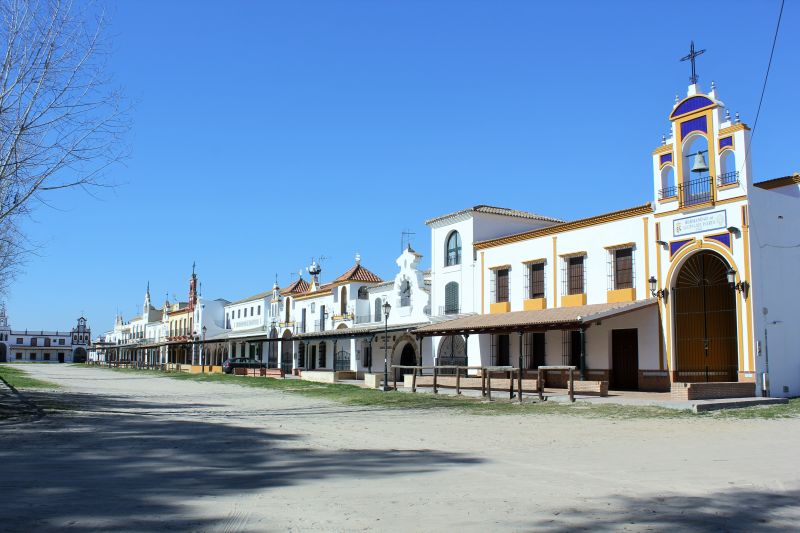 …but we were able to stay, for free right in the centre and it had a real wild west character as you can see from the photos. 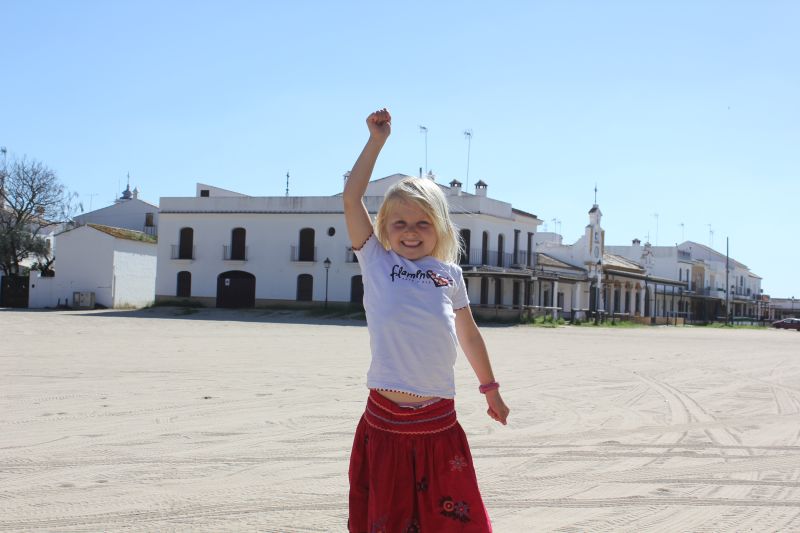 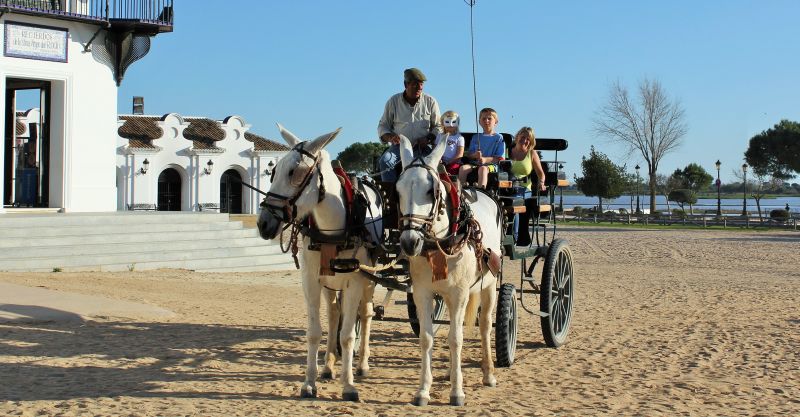 Next morning the kids even got a ride on some ponies.  No health and safety overkill here – you pay the money, get given a couple of horses and told to come back in 30 mins.  The ponies may have been little but they had character and at one stage they spotted some fresh grass and took off with me, on foot, holding onto their reins and running along to keep up.  It was only when I heard an uproar from a crowd of locals that I realised James had actually fallen off his horse and was sprawled in the dirt 50m behind us!! 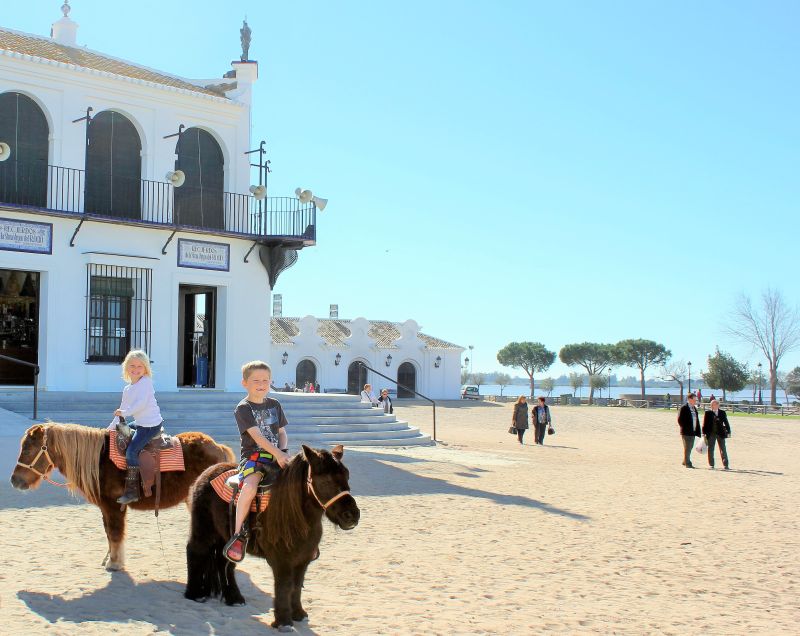 Next day, we hit up a new country – Portugal.  Found a reference to an interesting place on the internet so we checked it out and ended up staying.  It was a chance to stay in a rural area on an organic farm populated by volunteer workers (mainly German travellers/backpackers) who paid for their keep by working on the farm.  Our unwritten deal was if we purchased something from the farm shop, we could park up for no charge (even inc electricity).  So, gladly we bought some herbs, fig truffles, and delicious fig jam.  Rosa, the owner was lovely and the kids got to spend some time with Josephine, a 6 year old girl from Germany who was 8 months into a European bicycle tour with her dad (5000kms so far)! 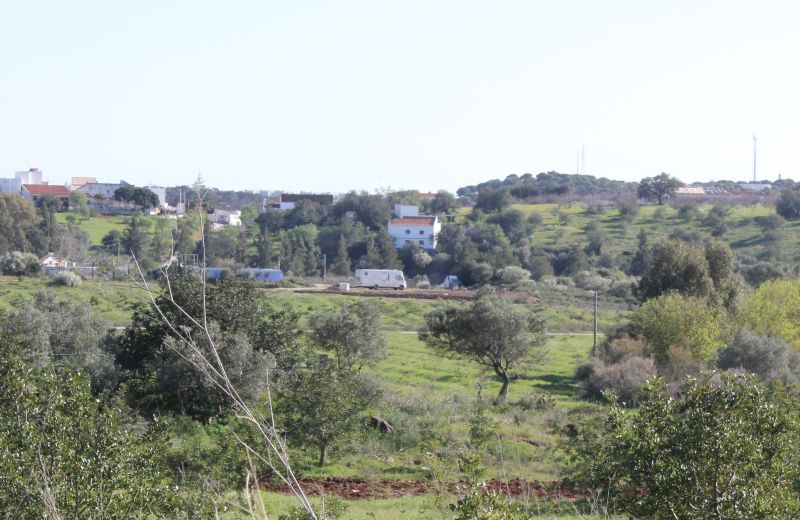 That’s us in the middle!

After that nice intro to Portugal, we then hit the road and drove along the coast of the Algarve.  Whilst it’s famous for its weather and attracts heaps of tourists, it didn’t do much for us – high rises, condos and stuff aren’t really our thing nor compatible with a campervan.  So we pushed on to Sagres, the far South West tip of Portugal (Europe in fact). 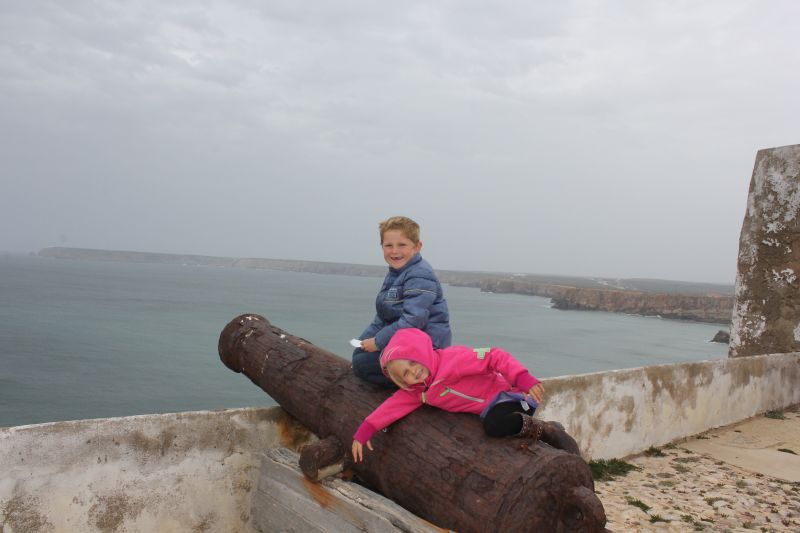 Sagres had a great feel about it and we spend an hour or so exploring the fort on the cliffs and learning a little about this area where so many explorers set off from in the 16th century (eg Henry the Navigator and Magellan).  Saw some fisherman along the way, leaning off gut-wrenching cliffs as they cast their rods out.  Several of them were swigging from wine bottles, which, whilst it might have steading the nerves, shouldn’t be recommended when you’re 6 inches from certain death! 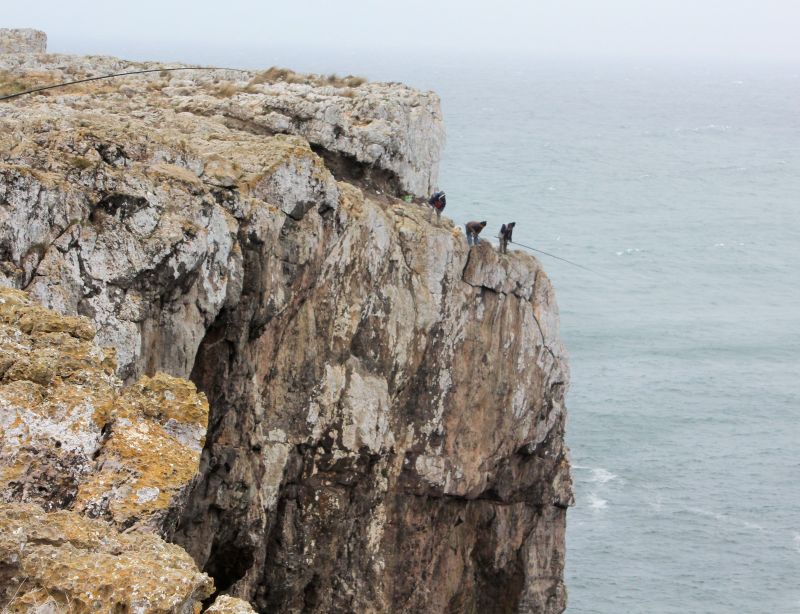 Although there was a campsite nearby, we opted for the wildcamping option right at the beach. 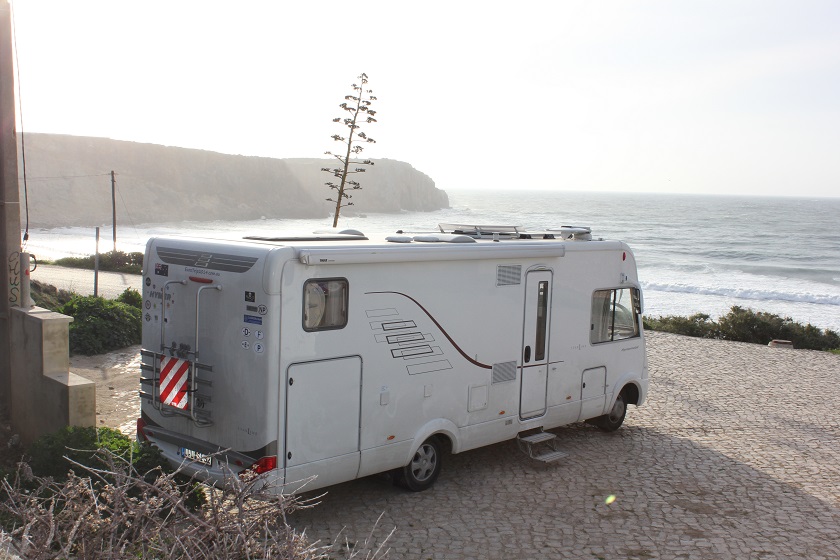 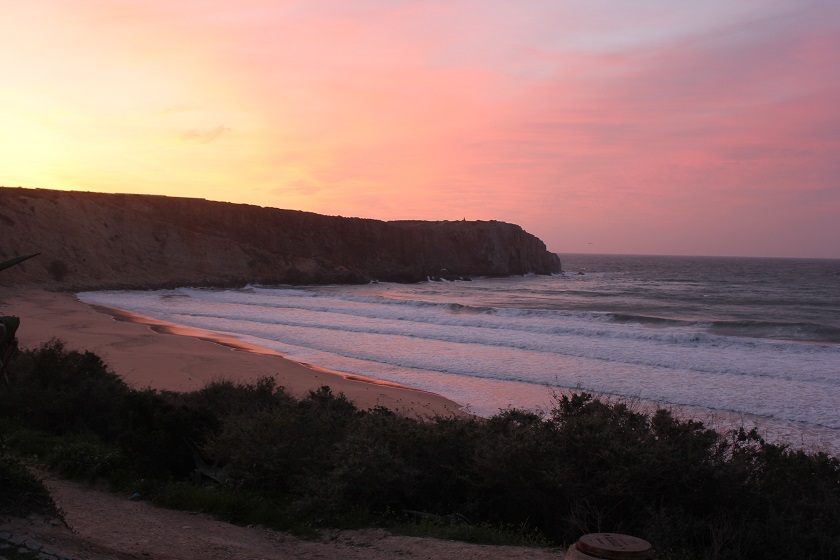 This is where I had my second surf of our trip and after grabbing some gear from the hire shop, seeing some decent waves I was so pumped, stoked, frothing and all that surf lingo that I charged on in making two kooky errors.

Underestimating the waves and overestimating my weakling surfing fitness I powered in through the main beach break.  After the fourth or fifth duckdive, I thought my head was going to explode as the freezing March Atlantic waters gave me the mother of all ice-cream headaches.  Also my wetsuit for some reason kept filling with water turning me into a useless Michelin man getting smashed again and again until I was spat out, in disgust, by the sea onto the beach, gasping for air like a fish out of water.

Not giving in, I did the smart thing and studied the waves and rightly spotted a path in by the rocks that should be much easier. So I paddled back out and this time, got out the back easily enough and paddled into a couple of waves.  Not to sound like a poor workman blaming his tools, but after a couple of average waves and cold water leakage, I inspected my gear.  The board appeared to be a no-name popout made from plastic…  a long way from my $900 Haydenshapes fiberglass and carbon fibre regular board.  The wetsuit, judging from the writing on the chest seemed to be a brand by the name of ‘Inside Front’ – presumably some local surf expression like ‘Caught Inside’ or ‘Out the Front’ sorta thing.  Anyway had a decent surf in the end caught a few decent ones, had a chat with a few surfers on the way out some of whom looked at me a little weird.  Was only when I got back to the van, I realised my second kook mistake… yeah, course you guessed it – I was wearing my wetsuit inside out!!  ‘Inside front’ indeed…

We loved Sagres and I made amends for my surfing faux pas by being the first out next morning in solid 4-5 foot waves.  The Atlantic certainly packs some power!

5 Responses to Spain and on to Portugal