Waterfalls kept on coming the next day as we drove along – evidence of the 6m+ of rain this area gets per year.  But in amongst the rain showers, there were plenty of sunny spells.

We parked up and, while Chelle and James settled in with their books, Abbie and I braved the light rain to make the 1.5hr trek and get up close to one of the larger waterfalls – Voringfossen.  It was so worth it – an exciting bush walk and, when we got to the waterfall, the sun came out and rewarded us with a beautiful rainbow – best I’ve ever seen. 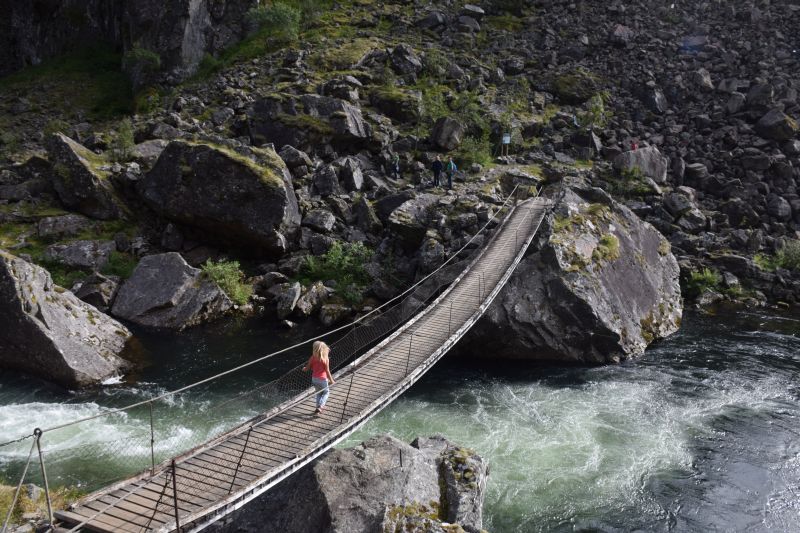 On the way to the falls 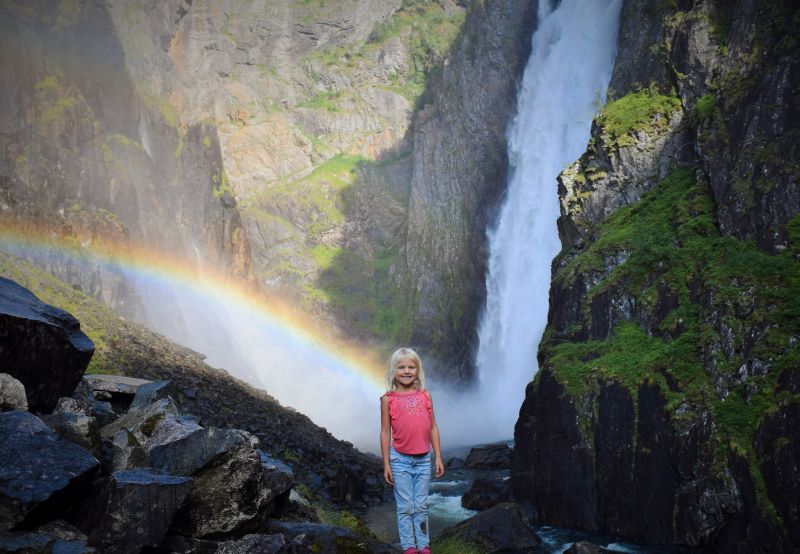 Instead of heading north like we’d originally planned, we’d got in touch with friends of ours and planned to meet them a few days later in Oslo.  So we did an about face and headed south aiming for a pretty special hike on the way to Oslo.

The scenery remained fantastic and the roads ‘challenging’, to say the least.  But we took our time, stopping frequently to let others pass or for a cup of tea and a photo. 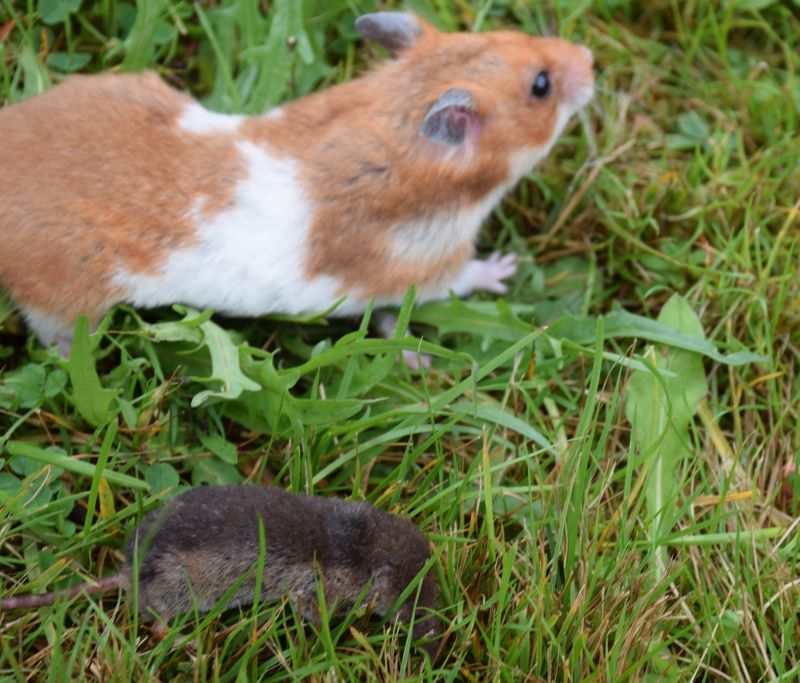 Cadiz made a friend at one of our stops

Arriving in the little village of Roldal, after visiting the local ‘stave church’, we parked up on the side of a remote dirt road.  About 8ish, we had a first for our trip – someone knocked on the door and we were asked, in broken English, to move on. It turned out we were on private property (part of a hydro electric plant) so fair enough I guess.  We just drove a few hundred metres and parked up the other side of the gate. 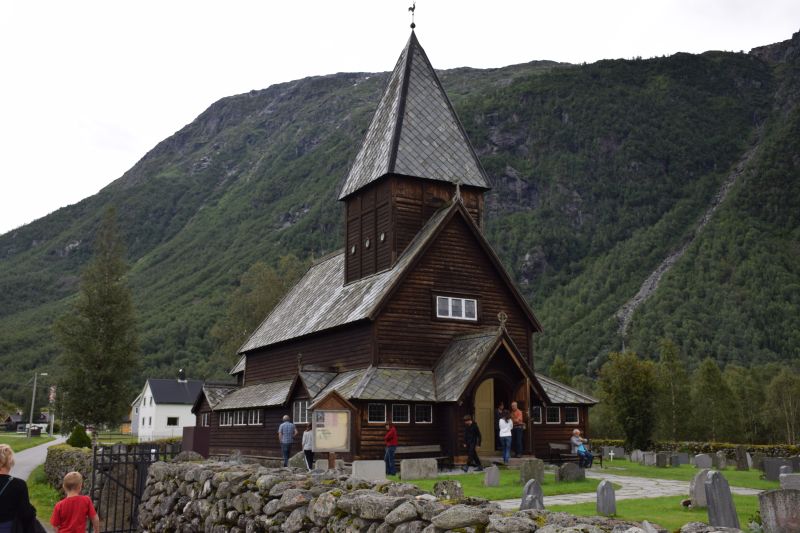 Roldal Stave Church – about 800 years old made entirely of wood.  Used to be 1,000 such churches in Norway, now just 26 left

Next day was a long old drive to arrive, in the mountains, at the start of our planned hike for early the next day.  Drive there was hairy as ever with the last 40-odd kms being a winding single lane road with regular places for passing. 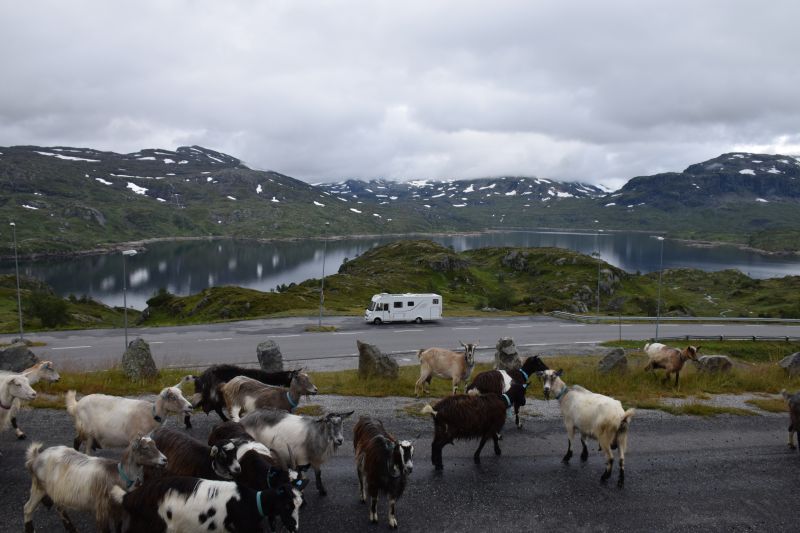 These goats actually latched onto me and crossed the main road trying to get into the van. Took a while to shoo them away!

Thankfully, we only came across a couple of dozen cars, and, due to the unwritten rule ‘the smaller vehicle must be the one that reverses when meeting suddenly on a hairpin bend’, we made it down without incident. 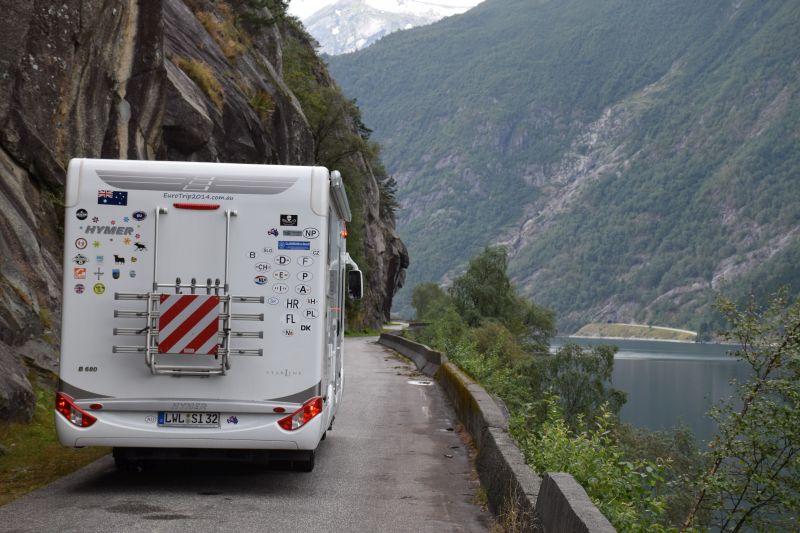 We stayed the night in the carpark where the hike would start the next morning.  The place was buzzing with returning hikers and base-jumpers amongst the mountain sheep scratching their backs on the parked cars. 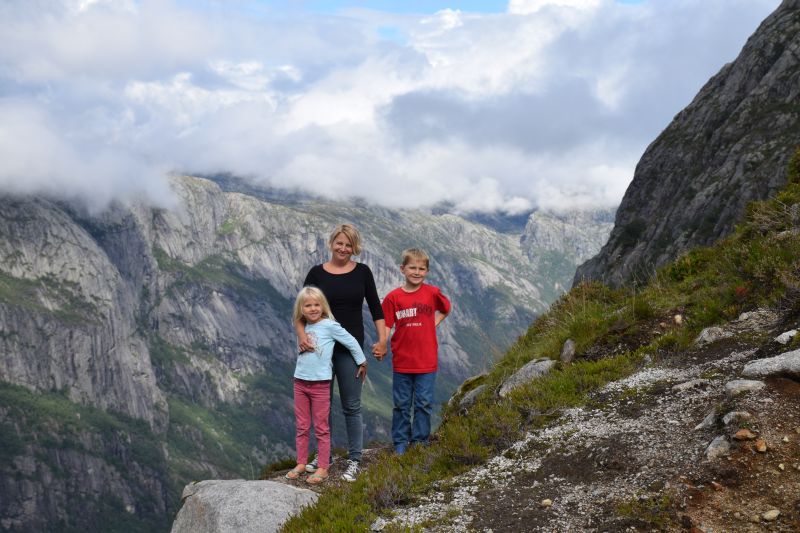 Ready to set off, next morning

The hike was billed as a 6hr return, classed as ‘hard’, not recommended for small children.  there were three main peaks to conquer on the way there and again on the way back.  We did see a German family with kids about our age who had just returned.  They took 7 hours and were equipped with all sorts of ropes and harnesses for the kids on the ‘tricky bits’.  Bit concerning but they assured us, if we took our time, it would be safe. 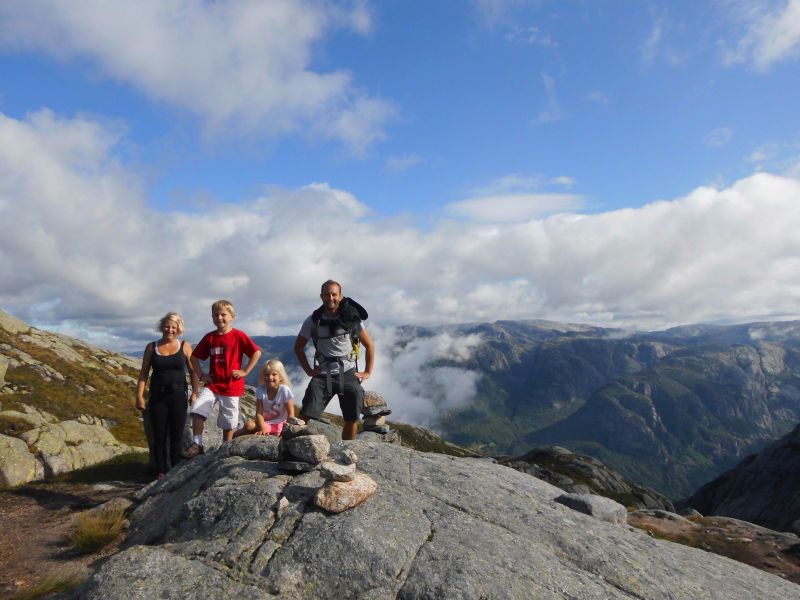 After the first peak

We were committed so set off early the next morning with high spirits in the sunshine.  The walk was indeed challenging with several steep ascents and descents but with plenty of food supplies we made it through, nearly unscathed (James took a bad slip early and tumbled a little distance). 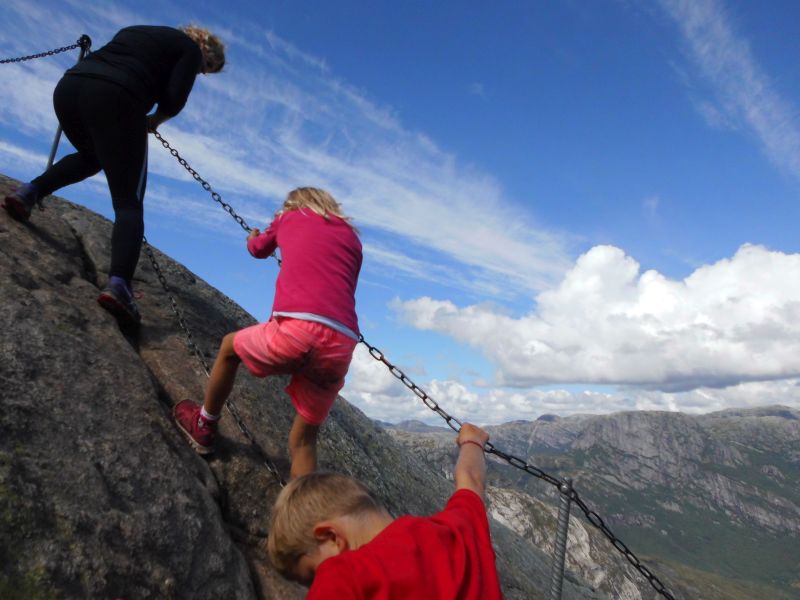 After 3 hours, we finally reached the destination – the Kjeragbolten – a boulder that’s wedged between two cliffs with a sheer 1,000m drop below to the waters of the Lsyefjord. 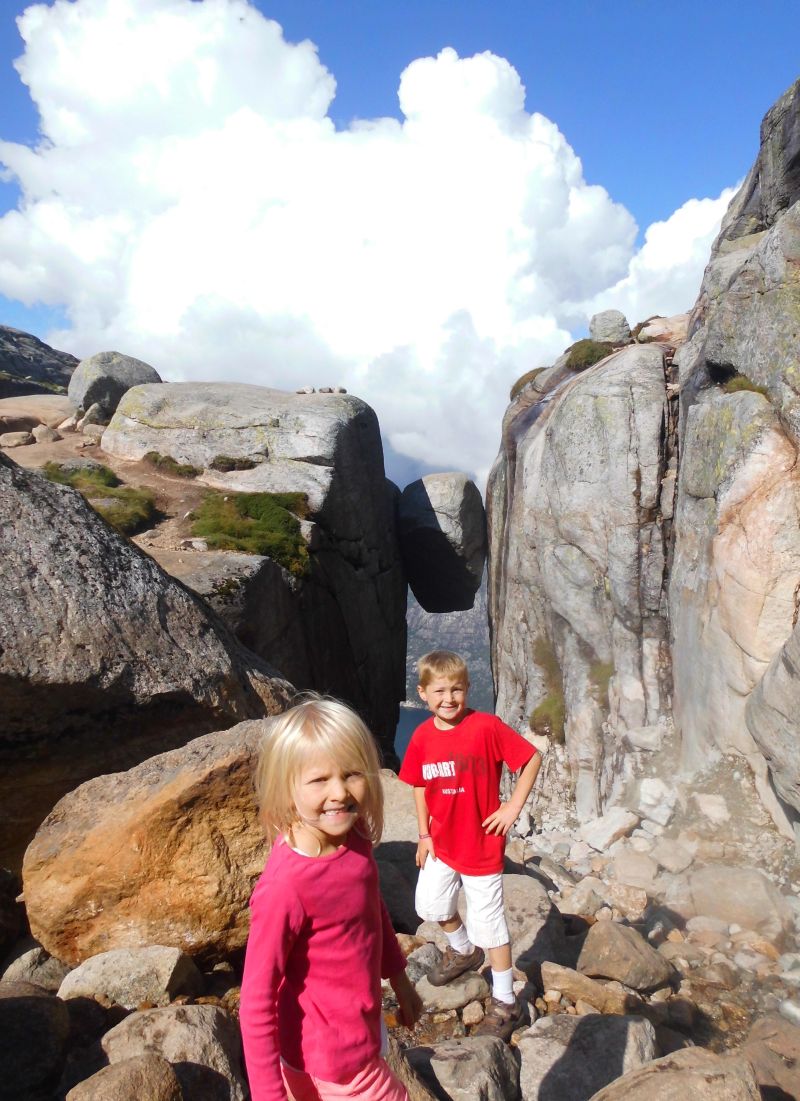 It was terrifying but after a shuffle round the edge of the rock wall and one large step onto the boulder, not looking down, I made it onto the rock for the obligatory photo. 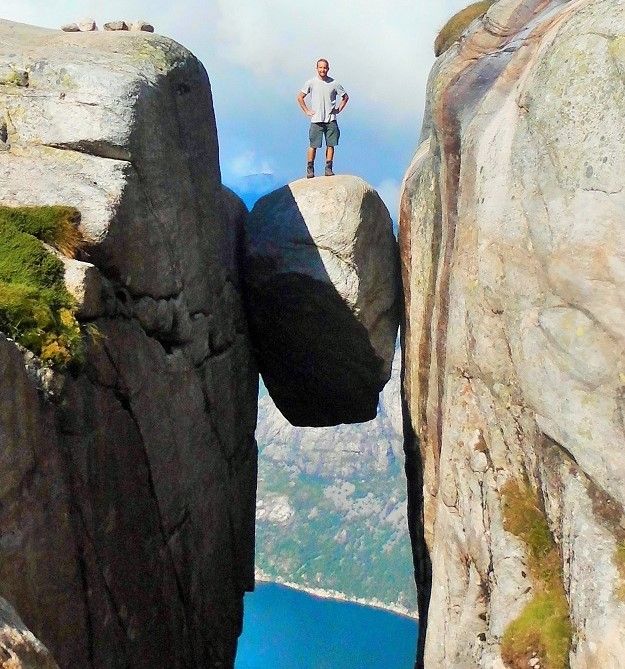 It was a fantastic day and we are so proud of the kids… the youngest people we saw on the trek and they blitzed it without complaint. 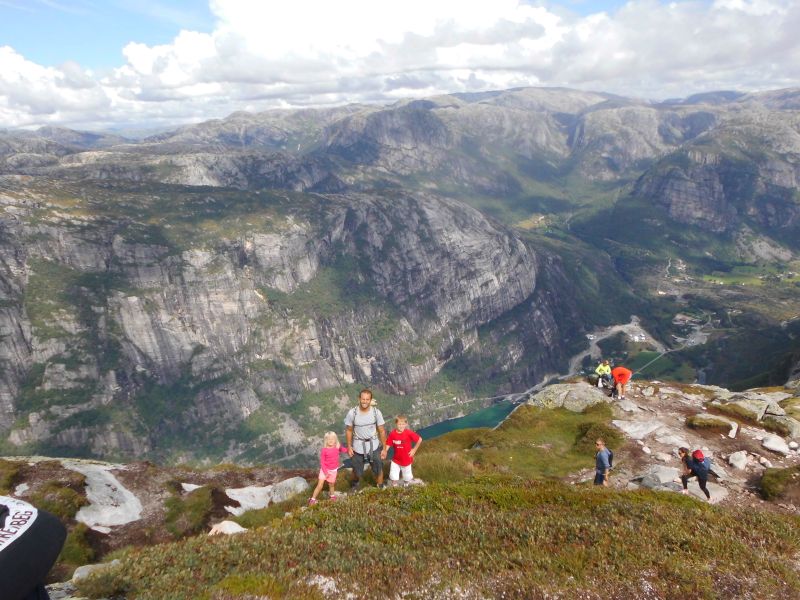 On the descent – Lysefjord in the background 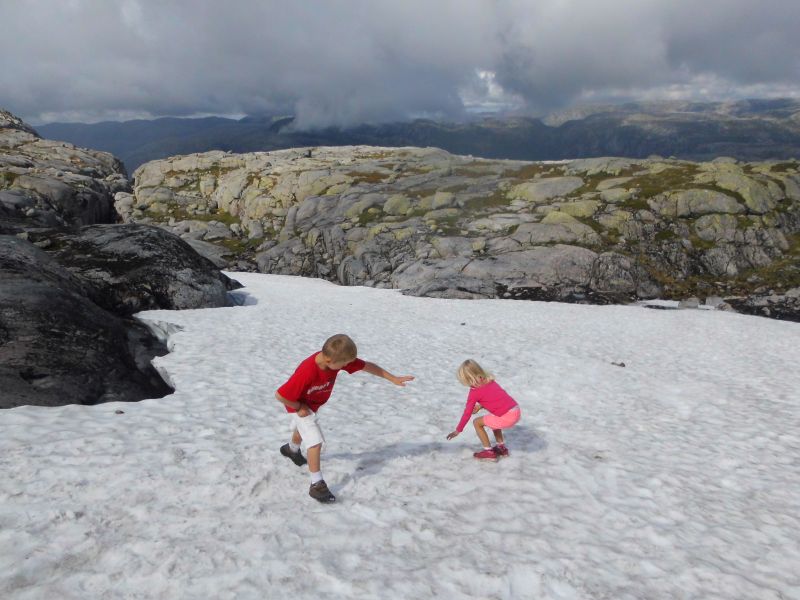