Onwards to Deutschland where, after a few hours drive and yet more stunning scenery, we arrived in Munich.  We had actually booked a couple of days respite in a suburban hotel – partly so we had an address to send some football tickets to (more on that later) but also so we could get easy access to the city for a couple of days.It was a nice hotel with a lovely room and after a tram & u-bahn we were in the city in next to no time. 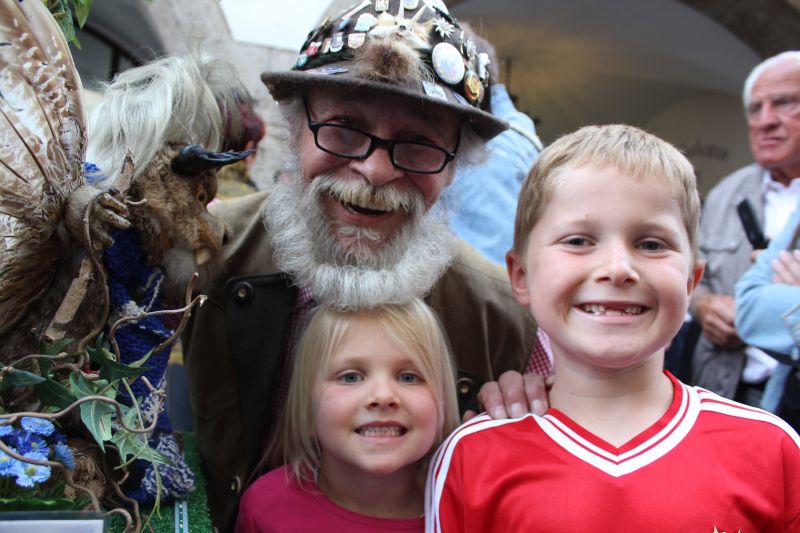 After a brief wander in the city, enjoying the lovely buildings and architecture, we happened upon the Rathaus-Glockenspiel right on noon which is when it chimes and 30-odd life-size mechanical figures play out a couple of old Bavarian stories as it has done ever day for over 100 years. 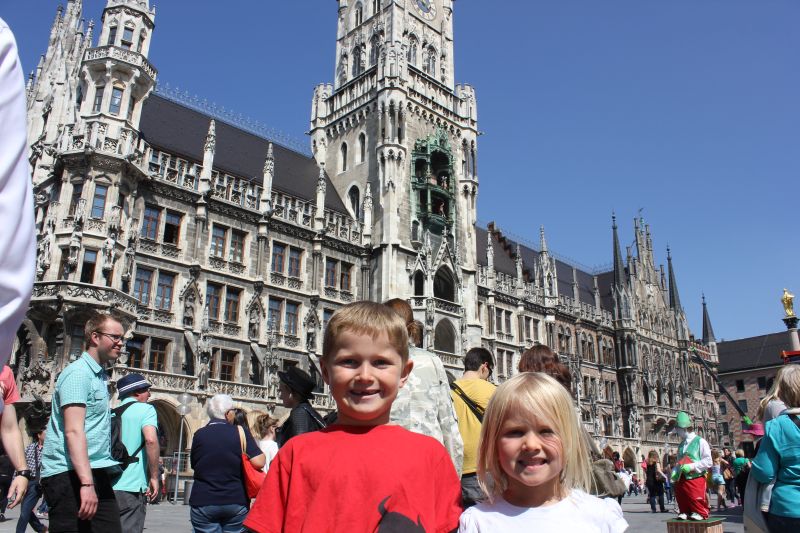 Chelle then met her pre-arranged hair appointment and the kids and I headed for the Hofbrauhaus – the huge and legendary beer hall in the old city.  Kids were stoked as the lemonades were 500mls as standard as was I when the 1 litre stein was delivered! 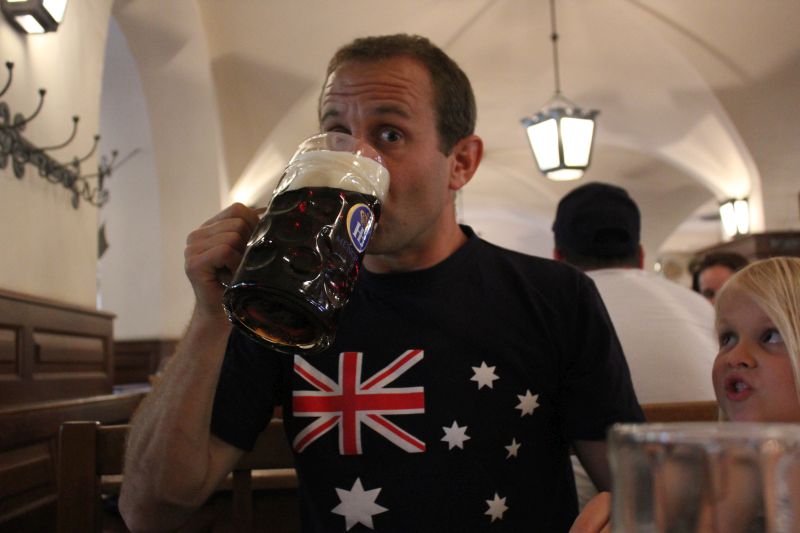 As it was Australia day, I helped myself to an extra drink or two and, after Chelle caught up with us, we spent a lovely night singing along with the oom pah pah band and chatting with the local old boys (who, it seems, are an institution in the pub with their own crest over ‘their’ seats and their own beer mats!)

Next day the girls and boys split up – the former headed shopping-bound while we aimed for the Allianz stadium to see the mighty Bayern Munich vs Werder Bremen. 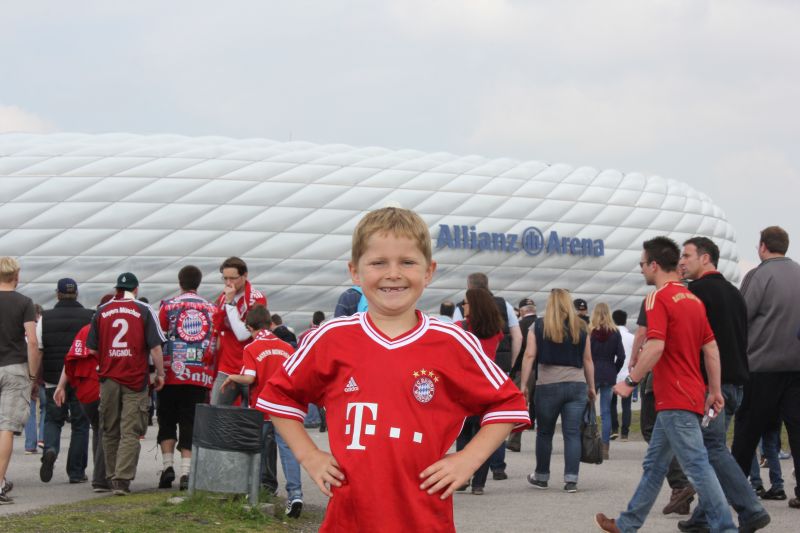 Although it was an end-of-season game that didn’t mean much to either side, like every Bayern game this season it was a complete sellout.  71,000 fans packed in giving it their all.  We joined in of course and were treated to a 5:2 goalfest to the home side. 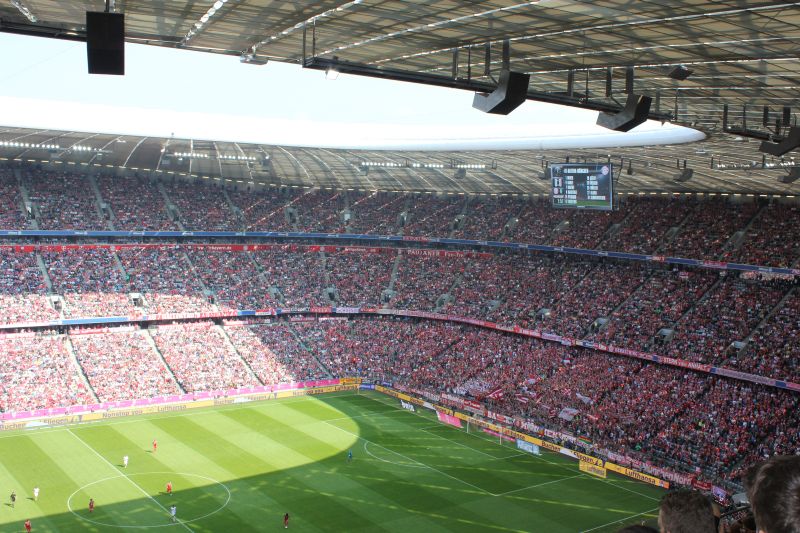 Next day we checked out of our hotel and headed just 30 minutes away to the concentration camp of Dachau just outside Munich.  After deliberation, we took the kids in on our self-guided tour heeding the advice of the staff who advised what really wasn’t suitable for children.  We spent a sombre, yet important couple of hours wandering around the complex trying to get a handle on the scale of the operation.  Whilst not a ‘death camp’ like Auschwitz, the camp was the first concentration camp opened in Germany and forced labour was a death sentence to around 40,000 prisoners. 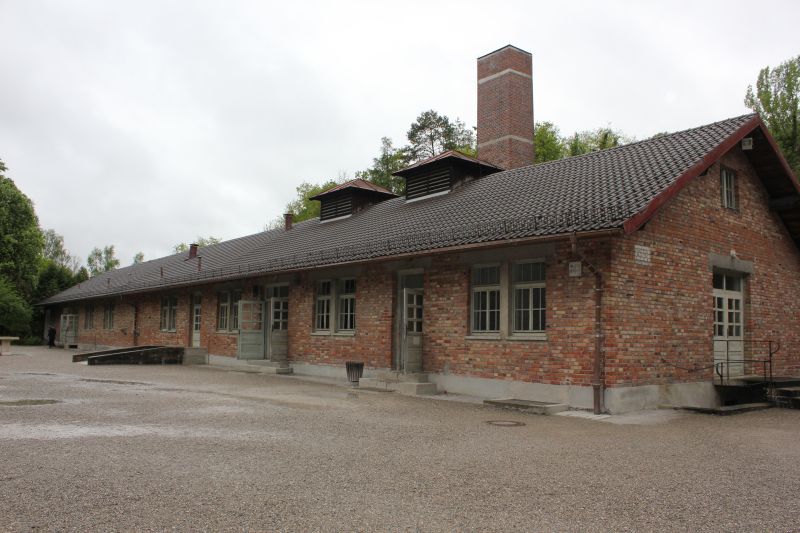 Although a lot went over their heads (especially Abbie) , the kids were exemplary – very well-behaved and engaged throughout our tour.  I took a heap of photos but even this place was overshadowed a week later so I won’t go into any more detail here.

The mood lightened up with our next destination.  Munich is a fantastic city.  For me it nearly has it all especially when it comes to the holy trinity of beer, sausages and football.

If only it had that other passion of mine, surfing… 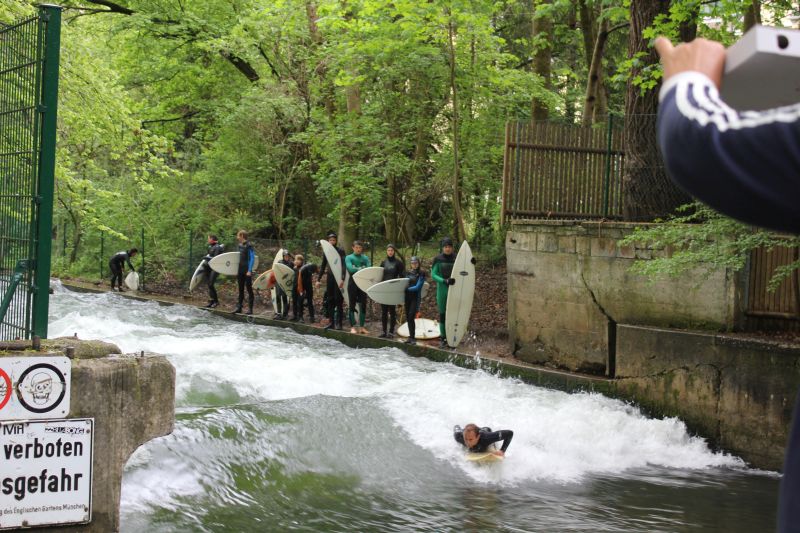 Yes!  It seems this landlocked city has three ‘river waves’ where locals take turns to ride a never-ending wave.  It was absolutely freezing – everybody else had a wetsuit twice the thickness of mine, rubber booties and head protection.  After 7 or 8 ‘gos’ on the wave, I was a teeth-chattering mess and gladly made my way back to Frosty for a hot shower.

Next it was the kids turn for some fun so we headed to the other side of the city to a place called Erding, home of the famous Erdinger beer but more importantly, a massive indoor pool and waterslide complex.  Happily, they had an official Stellplatz with all facilities in their car park so we stayed the night ready for an early start the next morning.

Alas, when we rocked up, we found the slides are only open after school hours so we were limited to the rest of the complex.  However we all had a great time despite the unfamiliarity of the place and determined to make the most of it.

For example, all four of us joined a queue to see where it would go.  When we got to the front we were each given a handful of salt and ushered to a door.  Inside was a sauna and we all staggered in reeling from the heat.  It was then an old guy asked if I could rub his salt in his back to which I professed no knowledge of German whatsoever and scuttled away.  Then we realised, through the gloom, that the lady opposite had her boobs out.  It was all a bit much for our non-European sensibilities so we made haste our escape.

Things were a lot more sedate afterwards and we all enjoyed a face mask followed by a swim outside in the thermal pool and a bracing 20 minutes of aqua aerobics with the oldies.

Following our swim, we headed north to Regensburg, another beautiful city in the north of Bavaria and stocked up with fresh supplies from the local market.

All this city-slicking had us hankering for nature so we followed our noses off the main roads until we were heading down a 1-lane dirt track which ended up at a rough car park next to a tiny old chapel. 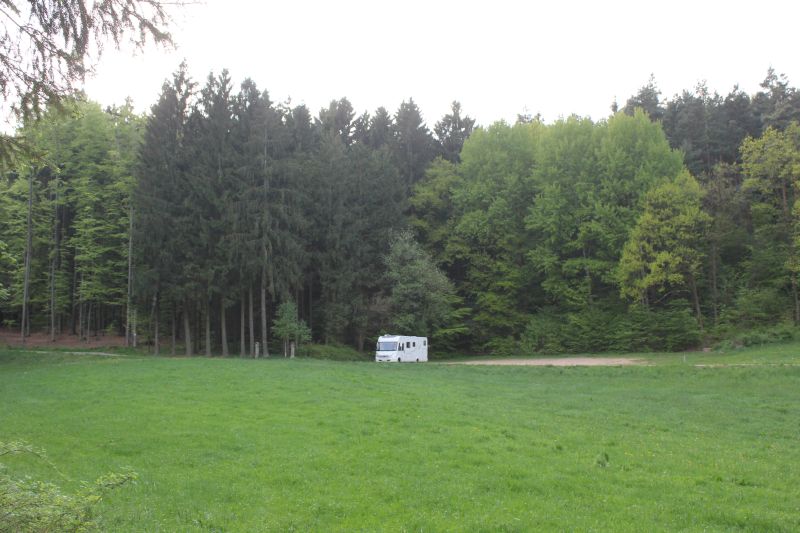 Seemingly deserted… our spot for the night in deepest, darkest Bavaria

Didn’t appear to be anyone for miles but after a little while more and more people started turning up.  Some by cars but mostly on foot arriving from who-knows-where over the hills.  Turns out the chapel is a very old and sacred spot to which many devout make a pilgrimage as the waters in the well are healing and even restored sight to some blind guy a few years back.  Anyway they were very friendly and no one seemed to mind us spending the night. 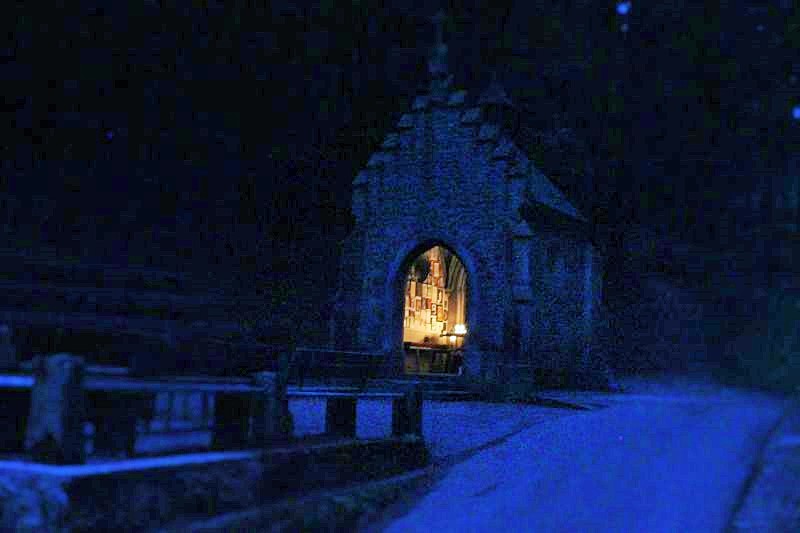 Rather spooky Blair Witch style photo of the chapel

Next morning we aimed for Bamburg a world heritage town/city a few hours north.  We stopped by in Nuremburg on the way and after a few CBD driving and parking dramas, we spent an hour or so checking it out – as you may well know it’s a very historically significant spot as it’s where the Nazis really cemented their power through legislation and the famous rallies. 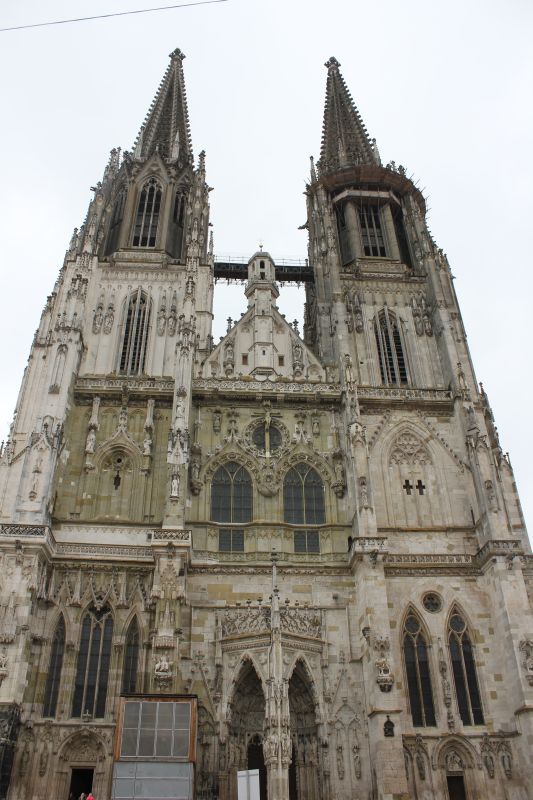 Some church in Nuremburg.. can’t remember which one and can’t be bother to look it up.

Onwards to Bamburg where we found a nice little stellplatz on the river.  We wandered into town but came back very much underwhelmed as it really didn’t seem to be much worth seeing.  When we returned to the parking spot, we noticed a van with GB plates (rare) had rocked up with a couple of kids (even rarer) in the windows.  Sure enough James met Harrison (8) and Abbie met Thia (6) and then of course we met their mum & dad, Jenna and Bailey.  We all got on really well and chatted well into the night.  They are coming towards the end of their year-long European trip so we had a lot in common especially when it comes to travelling long-term with the kids. 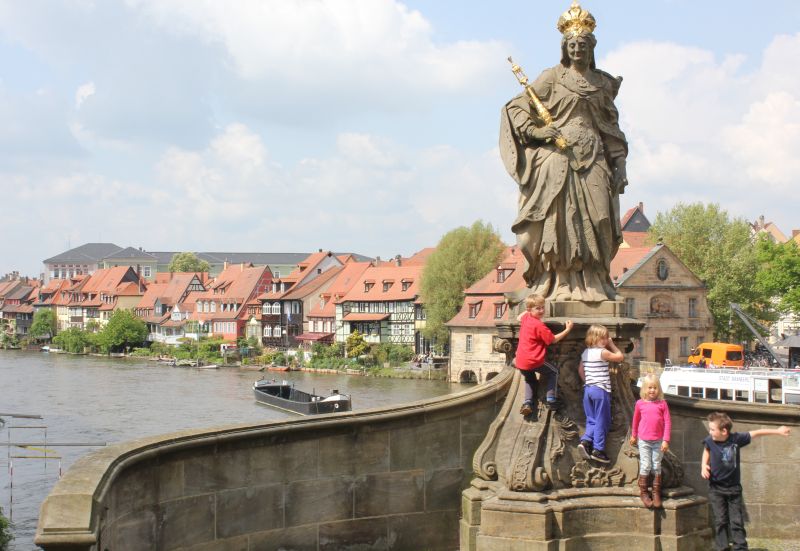 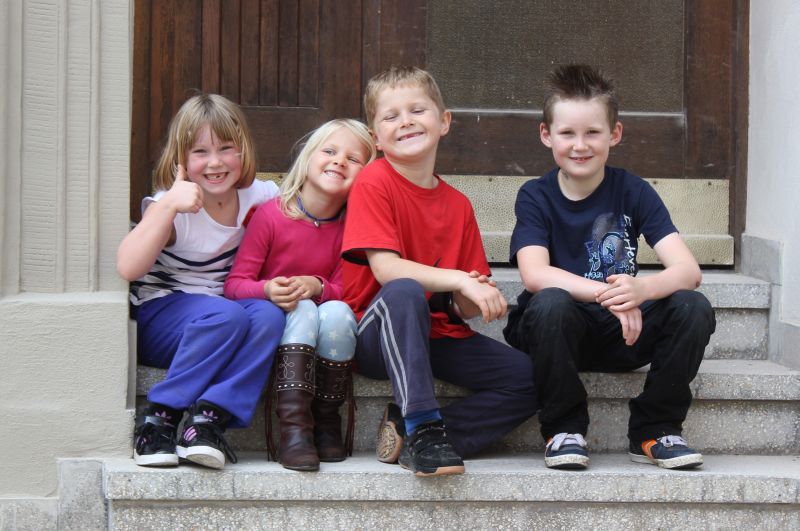 Yay – new buddies for the kids (and us!)

We all decided to stay an extra night to make the most of our meeting and spent the next day checking out Bamburg.  Turned out we’d visited completely the wrong part of town the day before and we were very glad we hadn’t just written it off as a hoax! 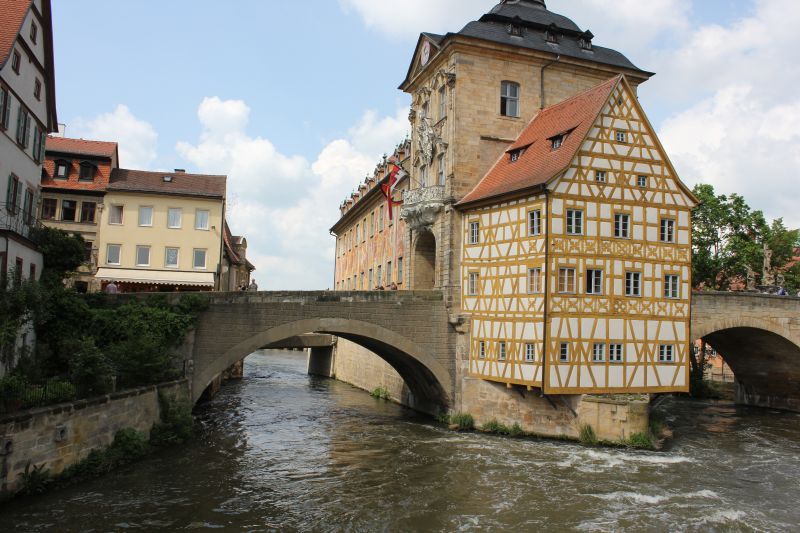 We had a nice lunch with the Bailey’s and followed it up several hours later with dinner and a few drinks back at the campervans.

Next day we temporarily parted company but made plans to meet up in Prague in a couple of days.  We headed ever-north for Dresden, a city that was decimated during air-raids in WW2.  However much of this city had been painstakingly restored and there were some great buildings, bridges and other sights to take in. 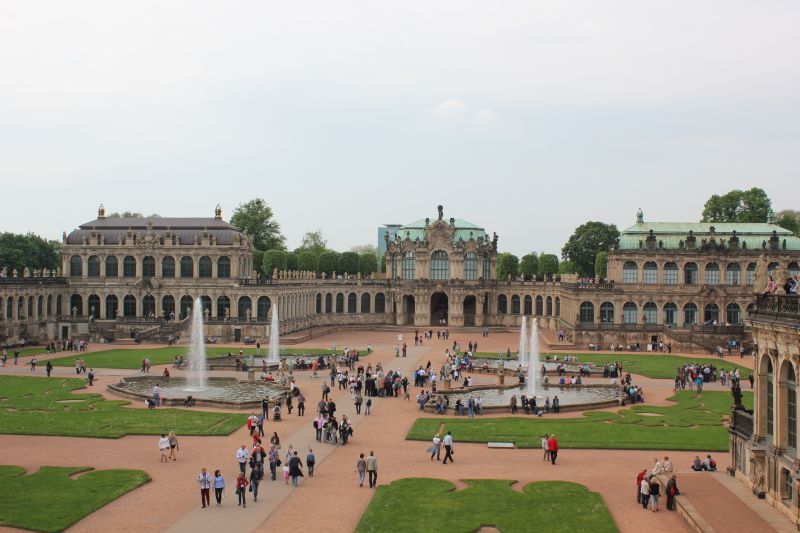 We ended up downtown, well off the tourist track right amongst the alternate heart of the city – a nice change from the main drags of the ‘Altstadt’.  However all of a sudden the sun disappeared, the temperature dropped 10 degrees and it started pouring.  We were caught short in only t-shirts and by the time we’d navigated 3 trams home we were cold and wet.

So here ends Germany part 2.  there will be a brief 3 and a longer 4 to follow if all goes to plan.  Next stop Czech Republic!

2 Responses to Germany once more – Bavaria to Dresden